Olympics 2016: Torch begins journey to Brazil. In a solemn and elaborate ceremony worthy of a "Game of Thrones" pageant, women in ancient-Greek style dresses and men in tunics performed symbolic rituals at the site of Ancient Olympia. 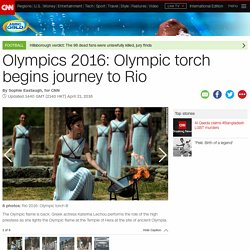 The Games were first held there in 776 BC and remained there for 12 centuries. Acting the role of the high priestess, Greek actress Katerina Lechou lit the torch using a concave mirror to focus the sun's rays, before placing it into a ceramic bowl. An olive branch was cut and a white dove released into the blue spring sky, both symbolizing peace. The flaming torch, which has its own Twitter account, was handed to its first torchbearer, gold medal-winning Greek gymnast Eleftherios Petrounias, before beginning its six-day relay across the country. 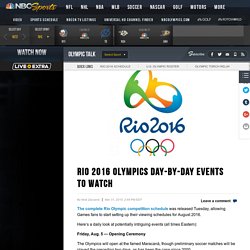 Here’s a daily look at potentially intriguing events (all times Eastern): Friday, Aug. 5 — Opening Ceremony The Olympics will open at the famed Maracanã, though preliminary soccer matches will be played the preceding two days, as has been the case since 2000. The Opening Ceremony will be highlighted by the Parade of Nations and cauldron lighting, the final torch bearer always a closely guarded secret. (Of note, the final torch bearer has actually been multiple people at the last three Olympics, so it will be interesting to see if Rio ends that streak.) Saturday, Aug. 6 — Day 1 Gymnastics: Men’s qualification. 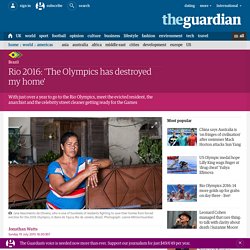 At the Olympic Park in Barra da Tijuca, a small forest of cranes swings back and forth over the velodrome and gymnasium even as the last few hold-outs in a nearby favela resist police attempts to forcibly remove them. On the banks of the Rodrigo de Freitas lagoon, labourers bolt together seating for rowing spectators as frustrated commuters nearby sit in endless traffic jams and wonder how the roads will cope with the influx of visitors. 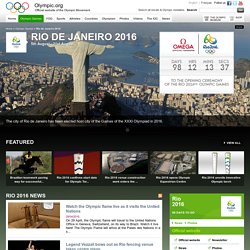 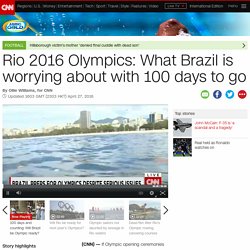 Who needs the staple pre-Olympic media diet of venue delays and security fears when you have a leader facing impeachment, a gigantic corruption scandal and a global public health emergency? As the clock ticks, it is impossible to know who will occupy the seat reserved for the Brazilian president at the August 5 opening ceremony.

The incumbent, Dilma Rousseff, is alleged to have manipulated her government's economic figures prior to 2014's election. She says the consequent impeachment proceedings against her are a "coup" she will fight to the last. Leading her opponents is Eduardo Cunha, speaker of Brazil's lower house. Hundreds of thousands of protesters on both sides routinely take to Brazil's streets. A lawyer in the northeastern city of Fortaleza, he and a group of friends run a daily Portuguese-language Olympics website named Surto Olimpico. Crises. Rio 2016 Olympics & Paralympics - Summer Games in Brazil.