Can Revolutionary change come from withing the DNC (Bernie 2016)

If Bernie Couldn't get anything through congress than change contress. The revolution America desperately needs: Why Bernie must start running on public education. Today, Bernie Sanders visits Philadelphia, the biggest city in a state critical to his insurgent bid’s narrow path to victory. 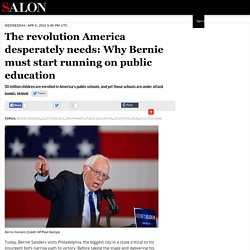 Before taking the stage and delivering his stump speech, he should know that there is no more salient social justice issue in this city than public education: Public schools have been gutted by deep Republican cuts, the rapid spread of expensive-to-fund and barely-regulated charter schools, and mass school closings. Though Americans have roughly 50.1 million children in public schools, neither candidate has spent much time discussing K-12 education. If Sanders wants to bring the political revolution to Pennsylvania, he has to speak up on the calamitous intersection of economic and racial injustice that is public education. Sanders knows this. In January, he called for moving away from funding public education with local property taxes, which along with housing segregation ensures that American schools remain separate and unequal. The proposal is revolutionary. The Long March of Bernie’s Army. Now that Bernie Sanders has lost most of the once-industrial Midwest to Hillary Clinton, now that it’s vanishingly likely that he’ll become the Democratic nominee, the most important period of the Sanders insurgency has finally begun. 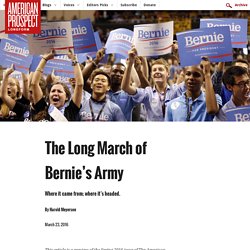 The senator from Vermont has astonished both his fiercest critics and his (relatively few) longtime fellow socialists by mobilizing millions of voters, becoming a hero to the young, and being on track, by the time this year’s primaries are done, to capture roughly 40 percent of the Democratic vote—all while running as a democratic socialist and scourge of Wall Street in this most capitalist of countries. But Sanders’s is not a campaign that history will judge by the number of votes he won. Like only a handful of predecessor campaigns, like no presidential campaign since Barry Goldwater’s, his will be judged by whether it sparked a movement that transformed America. And yet, many progressives believe this time may be different. Will they come over at all?

The 'Sanders Democrat' is Paving the Way for the Radical Left. In 2006, when I told people that I was a socialist, they looked at me like I was crazy. 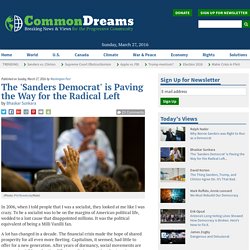 To be a socialist was to be on the margins of American political life, wedded to a lost cause that disappointed millions. It was the political equivalent of being a Milli Vanilli fan. A lot has changed in a decade. The financial crisis made the hope of shared prosperity for all even more fleeting. Capitalism, it seemed, had little to offer for a new generation. Today, Sen. Of course, socialists still have a long way to go. But increased interest in socialism generally does make it clear that discontent with decades of stagnating wages and the pain caused by the 2008 economic crisis are starting to take a political form. The Sanders Campaign’s Views On Creating Radical Change Are Quite Realistic. Our objective should be to build, painstakingly, patiently but energetically, a movement that, when it reaches a certain critical mass, would shake whoever is in the White House, in Congress, into changing national policy on matters of war and social justice. 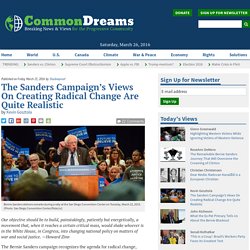 —Howard Zinn The Bernie Sanders campaign recognizes the agenda for radical change, which it champions, will not be realized without massive social movements to struggle and force elected officials to enact key legislation. The campaign does not think, if elected president, Sanders would automatically be able to pass legislation to support his agenda.

The campaign is realistic about what it will take to win victories for social justice, which is why a recent endorsement of Hillary Clinton by the Rolling Stone magazine deserves scrutiny. It actually is not disingenuous or ignorant of the “reality of modern America.” “Demonstrations educate the onlooker as well as the participant, and education requires repetition. What It Means to Be a Socialist. A giant American flag hangs on the facade of the New York Stock Exchange. 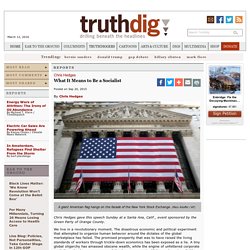 (Mary Altaffer / AP) Chris Hedges gave this speech Sunday at a Santa Ana, Calif., event sponsored by the Green Party of Orange County. We live in a revolutionary moment. The disastrous economic and political experiment that attempted to organize human behavior around the dictates of the global marketplace has failed. The promised prosperity that was to have raised the living standards of workers through trickle-down economics has been exposed as a lie. History has amply demonstrated that the seizure of power by a tiny cabal, whether a political party or a clique of oligarchs, leads to despotism. A bankrupt liberal class, holding up values it does nothing to defend, discredits itself as well as the purported liberal values of a civil democracy as it is swept aside, along with those values. We will, as Friedrich Engels wrote, make a transition to either socialism or barbarism.

Can Sanders Pull the Democrats to the Left?

Reich on the two party system.