Weird Washington. The sign on the doorframe says — as it has for a century and more — “Everyone Welcome.” 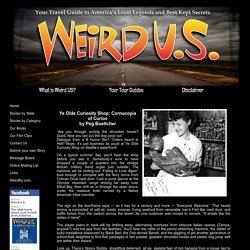 That heady aroma is concocted of salt air, exotic incense, frying seafood from venerable Ivar’s Fish Bar next door, and traffic fumes from the viaduct across the street. As one customer was moved to remark, “It smells like the sixties in here!” The player piano in back will be tinkling away, alternating overtures from obscure Italian operas (Zampa, anyone?) And hot jazz from the twenties. You’ll hear the rattle of the penny stretching machine, the clatter of lucky medallions dispensed by Black Bart, the One-Armed Bandit, and the giggling of yet another generation of school-kids delighted to find that packages of fart powder, goatskin shrunken heads and plastic dog poop well are within their means.

Look up. It’s taken the shop a long time to get this weird… over a hundred years, in fact. Weird Washington. Ah, Washington: evergreens, coffee, rock, and rain. 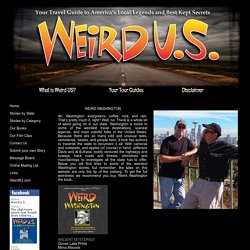 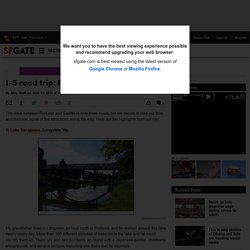 Here are the highlights from our day: 1) Lake Sacajawea, Longview, Wa. mylongview.com My grandfather lived in Longview, an hour north or Portland, and he walked around this lake nearly every day. More than 100 different varieties of trees circle the lake and he could identify them all. This is a great place to stretch your legs on a drive between Portland and Seattle. 2) Mount St. Www.copyrightfreephotos.com When Mount St. I called for my parents and they immediately phoned my grandfather who lived less than 60 miles from the mountain. I will never forget the day Mount St. “Can they make it erupt again?” 3) La Tarasca, Centralia, Wa. That’s Margarita Ayala in the photo above. We read rave reviews about this Mexican restaurant on Chowhound: La Tarasca is one of the best restaurants this side of Chicago. 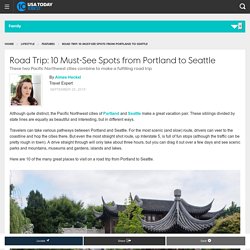 These siblings divided by state lines are equally as beautiful and interesting, but in different ways. Travelers can take various pathways between Portland and Seattle. For the most scenic (and slow) route, drivers can veer to the coastline and hop the cities there. But even the most straight shot route, up Interstate 5, is full of fun stops (although the traffic can be pretty rough in town).

A drive straight through will only take about three hours, but you can drag it out over a few days and see scenic parks and mountains, museums and gardens, islands and lakes. Here are 10 of the many great places to visit on a road trip from Portland to Seattle. The Chinese garden in Portland — Photo courtesy of Flickr user InSapphoWeTrust Lan Su Chinese Garden Start in Portland’s traditional Chinese garden, the Lan Su Chinese Garden, created as a partnership between Portland and Suzhou, China. 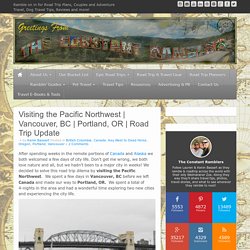 Don’t get me wrong, we both love nature and all, but we hadn’t been to a major city in weeks! We decided to solve this road trip dilema by visiting the Pacific Northwest. We spent a few days in Vancouver, BC before we left Canada and made our way to Portland, OR. We spent a total of 4-nights in the area and had a wonderful time exploring two new cities and experiencing the city life. Visiting the Pacific Northwest Vancouver, BC No road trip to Vancouver is complete without a stop off on Granville Island and a tour through the Granville Market. Roadtrippin‘ From Portland To Vancouver: The Best Things To Do And See Along The Way. 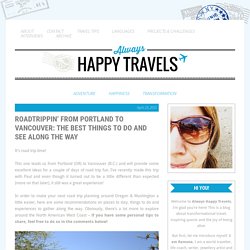 This one leads us from Portland (OR) to Vancouver (B.C.) and will provide some excellent ideas for a couple of days of road trip fun. I’ve recently made this trip with Paul and even though it turned out to be a little different than expected (more on that later), it still was a great experience! In order to make your next road trip planning around Oregon & Washington a little easier, here are some recommendations on places to stay, things to do and experiences to gather along the way. Obviously, there’s a lot more to explore around the North American West Coast – if you have some personal tips to share, feel free to do so in the comments below! The Route Well, since my visa waiver for the US was running out soon, our route was quite clear from the very beginning: Go North!