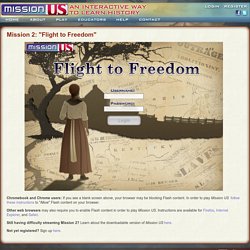 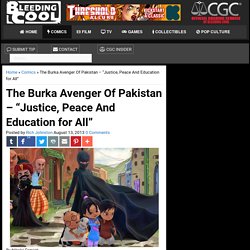 Mild-mannered school teacher Jiya was orphaned as a child and raised by a Kabaddi master named Jan and his wife. Kabaddi Jan taught Jiya a new form of Kabaddi (a South Asian wrestling sport/martial art) called Takht Kabaddi, “a new kind of fighting style where books and pens are primarily used as weapons in conjunction with a variety of karate moves.” Jiya now battles Taliban-like villains and other forms of evil disguised by a burka – which she does not wear as Jiya.

The concept was created by British-Pakistani singer-songwriter and pop musician Haroon, developed by the production company Unicorn Black and has now become Pakistan’s first original animated series (excluding Captain Safeguard, a cartoon which exists to do little more than sell Safeguard soap). The Urdu-language show first aired July 28 on channel Geo Tez in Pakistan with the tagline “Justice, Peace and Education for All.”

Related Posts None found. Girls' Education. In this lesson, students will explore the importance of educating girls and examine the barriers that keep girls out of school—all the while learning to become advocates for education.Studying the girls' education movement can shine a recent, relevant perspective on a range of issues covered in U.S. 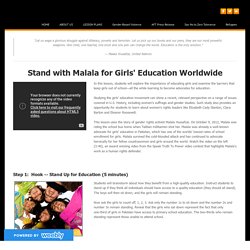 Malala was already a well-known advocate for girls' education in Pakistan, which has one of the worlds' lowest rates of school enrollment for girls. Malala survived the cold-blooded attack and has continued to advocate heroically for her fellow countrywomen and girls around the world. 'Let us pick up our books and our pens, they are the most powerful weapons' This is a transcription of the speech that Malala Yousafzai gave to the United Nations on 12 July 2013, the date of her 16th birthday and "Malala Day" at the UN. 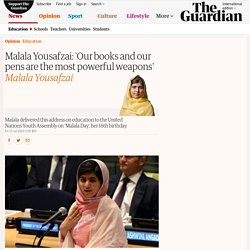 In the name of God, the most beneficent, the most merciful. Honorable UN Secretary General Mr Ban Ki-moon, respected president of the General Assembly Vuk Jeremic, honorable UN envoy for global education Mr Gordon Brown, respected elders and my dear brothers and sisters: Assalamu alaikum. Today is it an honor for me to be speaking again after a long time. Write for Rights 2016 - A Chain Letter. What we do at Amnesty International. Emma Watson Gender equality is your issue too. 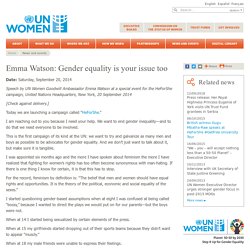 Today we are launching a campaign called “HeForShe.” I am reaching out to you because I need your help. We want to end gender inequality—and to do that we need everyone to be involved. This is the first campaign of its kind at the UN: we want to try and galvanize as many men and boys as possible to be advocates for gender equality. I was appointed six months ago and the more I have spoken about feminism the more I have realized that fighting for women’s rights has too often become synonymous with man-hating. For the record, feminism by definition is: “The belief that men and women should have equal rights and opportunities. When at 14 I started being sexualized by certain elements of the press. When at 18 my male friends were unable to express their feelings. Thank you. The Story of Human Rights.

Lisa Kristine: Photos that bear witness to modern slavery. I'm 150 feet down an illegal mine shaft in Ghana.The air is thick with heat and dust,and it's hard to breathe.I can feel the brush of sweaty bodies passing mein the darkness, but I can't see much else.I hear voices talking, but mostly the shaftis this cacophony of men coughing,and stone being broken with primitive tools.Like the others, I wear a flickering, cheap flashlighttied to my head with this elastic, tattered band,and I can barely make out the slick tree limbsholding up the walls of the three-foot square holedropping hundreds of feet into the earth.When my hand slips, I suddenly remember a minerI had met days before who had lost his gripand fell countless feet down that shaft. 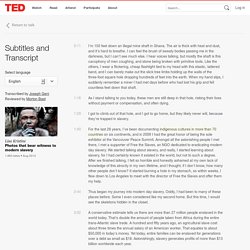 As I stand talking to you today,these men are still deep in that hole,risking their lives without payment or compensation,and often dying. I got to climb out of that hole, and I got to go home,but they likely never will, because they're trapped in slavery. My interpreter told me their stories. This is Manuru. Bryan Stevenson: We need to talk about an injustice. 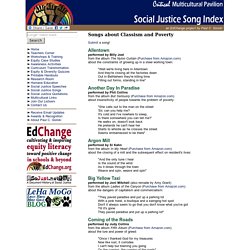 Social Justice and Human Rights Songs. The 4th Branch by Immortal Technique 9 to 5 by Dolly Parton The Abolitionist's Hymn Abraham, Malcolm and John by Dion American Idiot by Green Day American Terrorist by Lupe Fiasco Anarchy in the U.K. by the Sex Pistols Apartheid Is Nazism by Alpha Blondy Bad Time to Be Poor by the Rheostatics Ball of Confusion by the Temptations Ballad of a Soldier's Wife by PJ Harvey Beds Are Burning by Midnight Oil. 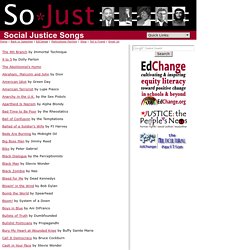