The aftermath (Voting Problems in the 2016 Primaries) 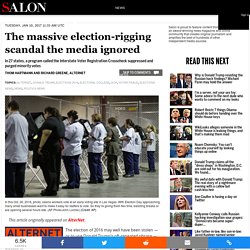 The election of 2016 may well have been stolen — or to use Donald Trump’s oft-repeated phrase — “rigged,” and nobody in the media seems willing to discuss it. The rigging was a pretty simple process, in fact: in 27 Republican-controlled states (including critical swing states) hundreds of thousands (possibly millions) of people showed up to vote, but were mysteriously blocked from voting for allegedly being registered with the intent to vote in multiple states. Greg Palast, an award-winning investigative journalist, writes a stinging piece in Rolling Stone magazine (August 2016 edition), predicting that the presidential election had already been decided: “The GOP’s Stealth War Against Voters.” He also wrote and produced a brilliant documentary on this exact subject that was released well before the election, titled The Best Democracy Money Can Buy. But he was never asked back, by Joy or anyone else at MSNBC. 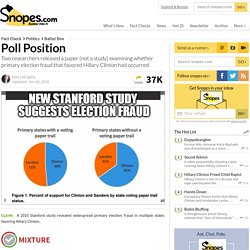 Mixture WHAT'S TRUE: Two researchers (presumably graduate students) from Stanford University and Tilburg University co-authored a paper asserting they uncovered information suggesting widespread primary election fraud favoring Hillary Clinton had occurred across multiple states. WHAT'S FALSE: The paper was not a "Stanford Study," and its authors acknowledged their claims and research methodology had not been subject to any form of peer review or academic scrutiny. Example: [Collected via e-mail, Facebook, and Twitter, June 2016] Origin:On 8 June 2016, the Facebook page "The Bern Report" shared a document authored by researchers Axel Geijsel of Tilburg University in The Netherlands and Rodolfo Cortes Barragan of Stanford University suggesting that "the outcomes of the 2016 Democratic Party nomination contest [are not] completely legitimate: 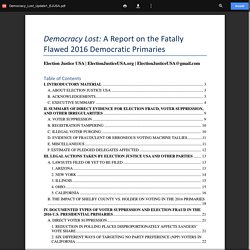 Dem Primary Full of Voter Suppression & Other Signs Of Fraud. Salon: Chaos at The polls. USA: You Need Democracy but it is too expensive for us. USA Elections for the world: Polling Problems at Home. DC Democratic Party screwup leaves Bernie Sanders off primary ballot in nation's capital. Yeah, fix this shit: Presidential candidate Bernie Sanders' name is not yet on the ballot in D.C. after the D.C. 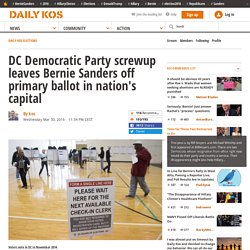 Democratic Party submitted registration paperwork a day late, News4 has learned. The Sanders’ campaign as well as Hillary Clinton's campaign submitted registration fees of $2,500 on time earlier this month in advance of the June 14 Democratic primary. But the D.C. Democrats did not notify the D.C. By all indications, this will be fixed before the district’s primary, which is the last in the nation on June 14.

Hillary Clinton’s “dirty politics”: Bernie Sanders is experiencing the same nasty tricks that Clinton’s campaign dealt Obama in 2008. With allegations of voter suppression in Arizona, as well as questions about the Clinton campaign’s tactics in Iowa, Nevada, and other states, some historical context is needed. 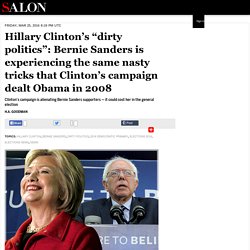 In 2008, The Atlantic published an article explaining “dirty politics” and voting “irregularities” titled “Obama Manager Accuses Clintons of Widespread Dirty Politics”: “David Plouffe, in a succinct statement appended to a released quotation from his boss, Barack Obama, said the Obama campaign was investigating more than 200 reporters of irregularities in Nevada. ‘We currently have reports of over 200 separate incidents of trouble at caucus sites, including doors being closed up to thirty minutes early, registration forms running out so people were turned away, and ID being requested and checked in a non-uniform fashion. This is in addition to the Clinton campaign’s efforts to confuse voters and call into question the at-large caucus sites which clearly had an affect on turnout at these locations. Voter Supression. Voting Irregularities.