Finding Tech. Mesosphere Launches SDK And Developer Program For Its Data Center Operating System. Mesosphere, the company that aims to build an operating system for the data center, today announced the launch of its developer program and SDK. 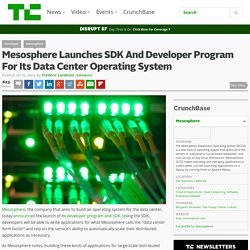 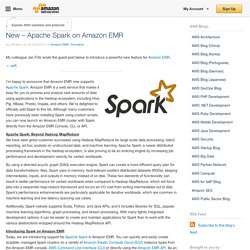 Amazon EMR is a web service that makes it easy for you to process and analyze vast amounts of data using applications in the Hadoop ecosystem, including Hive, Pig, HBase, Presto, Impala, and others. VPC Flow Logs – Log and View Network Traffic Flows. Many organizations collect, store, and analyze network flow logs. 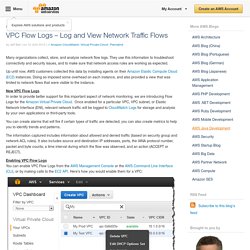 They use this information to troubleshoot connectivity and security issues, and to make sure that network access rules are working as expected. Goodbye XML! By Brian Rosmaita - Posted on Jun 9 2015 As a developer working in the cloud, you're probably aware that OpenStack (and the cloud industry in general) have moved away from supporting XML APIs. 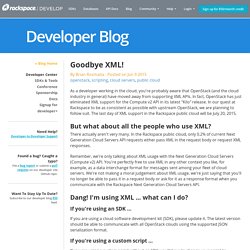 In fact, OpenStack has just eliminated XML support for the Compute v2 API in its latest "Kilo" release. In our quest at Rackspace to be as consistent as possible with upstream OpenStack, we are planning to follow suit. The last day of XML support in the Rackspace public cloud will be July 20, 2015. New – VPC Endpoint for Amazon S3. I would like to tell you about a new AWS feature that will allow you to make even better use of Amazon Virtual Private Cloud and Amazon Simple Storage Service (S3). 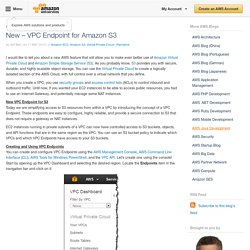 As you probably know, S3 provides you with secure, durable, and highly scalable object storage. You can use the Virtual Private Cloud to create a logically isolated section of the AWS Cloud, with full control over a virtual network that you define. Now Available – AWS Directory Service API & CLI (Bonus: CloudTrail Integration) AWS Directory Service allows you to connect your AWS resources to an existing on-premises Active Directory or to set up a new, standalone directory in the AWS Cloud (see my post, New AWS Directory Service, to learn more). 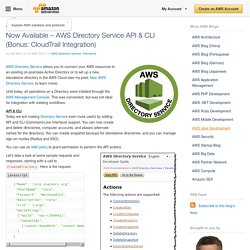 Until today, all operations on a Directory were initiated through the AWS Management Console. Demonstrating NFV on OpenStack - Cloud Evolution Blog. Toby Ford of AT&T and Mats Karlsson of Ericsson follow up their previous OpenStack Summit talk introducing NFV with an update and demos on evolving OpenStack to support NFV. 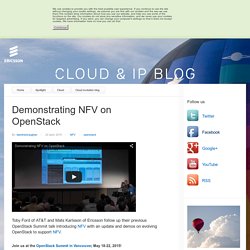 Join us at the OpenStack Summit in Vancouver, May 18-22, 2015! Written by deirdrestraughan Deirdré Straughan has been communicating online since 1982 and has worked in technology nearly as long, in technical writing and editing, training, UI design, marketing, open source community management, events, social media, video, and more. She operates at the interfaces between companies and customers, technologists and non-technologists, marketers and engineers, and anywhere else that people need help communicating with each other about technology.

How to Create a Limited IAM Administrator by Using Managed Policies - AWS Security Blog. ElastiCache Update – Redis 2.8.19 Now Available. You can use Amazon ElastiCache to easily create, scale, and maintain cloud-based in-memory key-value stores that use the Memcached or Redis engines. 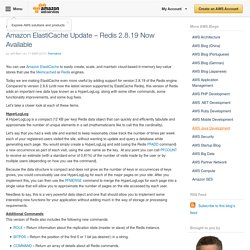 Today we are making ElastiCache even more useful by adding support for version 2.8.19 of the Redis engine. Compared to version 2.8.6 (until now the latest version supported by ElastiCache Redis), this version of Redis adds an important new data type known as a HyperLogLog, along with some other commands, some functionality improvements, and some bug fixes. Let’s take a closer look at each of these items. How PlayFab migrated from EC2-Classic to VPC with zero downtime.

At PlayFab, one of our core tenets is no downtime. 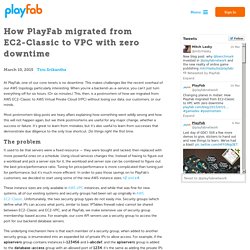 This makes challenges like the recent overhaul of our AWS topology particularly interesting. When you’re a backend-as-a-service, you can’t just turn everything off for six hours. (Or six minutes.) This, then, is a postmortem of how we migrated from AWS EC2-Classic to AWS Virtual Private Cloud (VPC) without losing our data, our customers, or our minds. Most postmortem blog posts are teary affairs explaining how something went wildly wrong and how this will not happen again, but we think postmortems are useful for any major change, whether a success or failure. 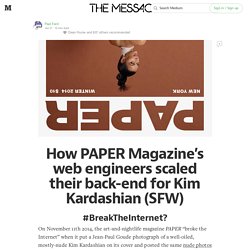 On November 11th 2014, the art-and-nightlife magazine PAPER “broke the Internet” when it put a Jean-Paul Goude photograph of a well-oiled, mostly-nude Kim Kardashian on its cover and posted the same nude photos of Kim Kardashian to its website (NSFW). EC2 Auto Recovery now available in the US East (N. Virginia) Region.

Oracle Cloud Periodic Table: Chemistry of Cloud Computing. ElastiCache T2 Support. As you may already know, Amazon Elastic Compute Cloud (EC2)'s new T2 instance type provides a solid level of baseline performance and the ability to burst above the baseline as needed. As I wrote in my blog post, these instances are ideal for development, testing, and medium-traffic web sites. Today we are bringing the benefits of the T2 instance type to Amazon ElastiCache. The cache.t2.micro (555 megabytes of RAM), cache.t2.small (1.55 gigabytes of RAM), and cache.t2.medium (3.22 gigabytes of RAM) cache nodes feature the latest Intel Xeon processors running at up to 3.3 GHz. You can launch new cache nodes using the Memcached or Redis engines. T2 instances are supported only within an Amazon Virtual Private Cloud. Greater Support for the VPC in CloudFormation. Run SUSE Enterprise Linux Server Using the AWS Free Usage Tier. I'm happy to announce that the AWS Free Usage Tier now includes 750 hours of SUSE Linux Enterprise Server (SLES) usage on a t1.micro instance.

If you are eligible for the free usage tier you now have the option to run SLES as part of your 750 hours of monthly Linux usage. You can use the AWS Marketplace (1-Click 32-bit, 64-bit) or the AWS Management Console to launch a micro instance running SLES: Read more about the Free Usage Tier in the Getting Started Guide. AWS CloudHSM FAQs. Q: What is AWS CloudHSM? The AWS CloudHSM service helps you meet corporate, contractual and regulatory compliance requirements for data security by using dedicated Hardware Security Module (HSM) appliances within the AWS cloud. AWS and AWS Marketplace partners offer a variety of solutions for protecting sensitive data within the AWS platform, but for some applications and data subject to contractual or regulatory mandates for managing cryptographic keys, additional protection may be necessary.

CloudHSM complements existing data protection solutions and allows you to protect your encryption keys within HSMs that are designed and validated to government standards for secure key management. Cloud Model Checklist. You have critical decisions ahead as you take your first steps into cloud computing. One of them will be whether to build a private cloud infrastructure in your own data centre, make use of one of the public cloud services offered by vendors like Amazon, Rackspace and HP, or combine the two in a ‘hybrid cloud’ approach.

You can get closer to the right decision by considering the right questions now: EC2 Instance Status Metrics. We introduced a set of EC2 instance status checks at the beginning of the year. These status checks are the results of automated tests performed by EC2 on every running instance that detect hardware and software issues. Amazon CloudFront - Support for Dynamic Content. IntroductionAmazon CloudFront's network of edge locations (currently 30, with more in the works) gives you the ability to distribute static and streaming content to your users at high speed with low latency. Today we are introducing a set of features that, taken together, allow you to use CloudFront to serve dynamic, personalized content more quickly. Cloudsnap - Connect your web apps. Amazon CloudSearch - Start Searching in One Hour for Less Than $100 / Month.

Continuing along in our quest to give you the tools that you need to build ridiculously powerful web sites and applications in no time flat at the lowest possible cost, I'd like to introduce you to Amazon CloudSearch. Cloudpaging. Cloudpaging is a foundational technology framework and represents our vision to transform native software delivery, deployment and provisioning from the Cloud - public, private or on-premises. New Amazon CloudWatch Monitoring Scripts. The Amazon CloudWatch team has just released new sample scripts for monitoring memory and disk space usage on your Amazon EC2 instances running Linux.