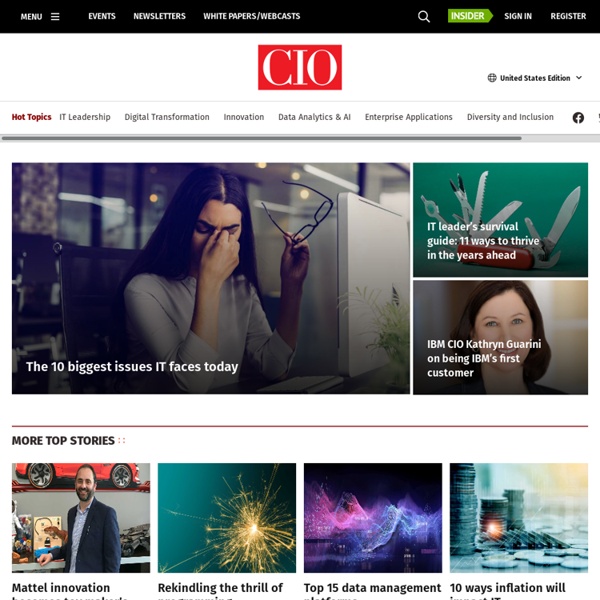 Free Books A lot of people keep asking about a good list of programming books. Hence, we are building this list to save your time and to spread the knowledge. Some of these books will definitely help us to evolve our coding skills and thought processes for developing better solutions. 2012: The year cloud computing took a bite out of IT When we started talking about cloud computing five years ago, it meant one thing: Services such as Amazon or Salesforce that customers could self-provision over the Internet and pay as they go. That's what we call the "public cloud" today, as opposed to the "private cloud," which refers to the application of public cloud technologies and practices to one's own data center. And guess what? The public cloud was where the action was in 2012 -- and it's where much of the action is going to be in 2013. According to IDC, businesses will spend $40 billion on the public cloud this year, rising to nearly $100 billion in 2016.

Department of Navy Chief Information Officer - Tag Results for CIO Authorities DON Business Transformation Council SECNAVINST 5420.197A - August 18, 2014 The purpose of this instruction is to establish policy and responsibilities for the Department of the Navy Business Transformation Council (BTC), with the membership and processes defined herein. The BTC provides a senior DON forum in which business transformation efforts that cross organizational and/or functional boundaries can be strategically assessed, approved, and accelerated. Guidance Regarding Cyberspace Roles, Responsibilities, Functions, and Governance Within the DoD

Gamification Categorization[edit] Gamification in a narrow sense is used in a non-game context, is built into the service system, and is aiming at an infinite experience. It does not aim at creating a game but offering a gameful experience. In a broader sense gamification also includes game context such as in serious games and finite and infinite games.[20]

Understanding The Cloud Computing Infrastructure Understanding The Cloud Computing Infrastructure As a long time advocate of cloud computing, I already know most of the technology and terms surrounding cloud computing and if someone mentions a new application or feature I might be able to gleam how it works based on the technologies used. This is not necessarily true for most people even if they have been in the IT industry for a long time. That is why I write “simple” articles that the less informed might be able to grasp easily. But to get a real understanding of something, you need to get an understanding of its internal structure, understand how it works and not just what it does. Cloud Computing And Big Data Cloud Computing And Big Data The cloud is all about applications, media and information. But of the three, media seems to be the largest with applications coming in at close second, while information ranks last place. But what we are seeing in the last two years suggests that information and other data is gaining ground and will soon overtake the other two in terms of relevance, at least in the non-consumer space, the business side. Experts are calling this “Big Data” and it is all about data processing and analytics. Everything we do online from social networking to e-commerce purchases, chatting, and even simple browsing yields tons of data that certain organizations collect and poll together with other partner organizations.

Gen Y vs. Gen X: Who Causes More IT Headaches? CIO CIO — You've heard the Gen Y stereotypes before: They're lazy workers, exude entitlement and have been reared on social technologies that they bring into the workplace, whether IT departments like it or not. A new Forrester Research (FORR) report sheds light on the latter issue, finding that Gen Y workers actually are not much different than Gen Xers or in some cases, even Baby Boomers, when it comes to their views on technology. Businesses should consider and rely more on this Gen Y group of employees when implementing policies and technologies, Forrester advises. Take, for example, this statistic: Among the first wave of Gen Y'ers that graduated college in 2001 or 2002, 52 percent have been in their current role between three and 10 years, according to the report.

European Union Outlines New Cloud Strategy, Draws Praise in U.S. CIO As they look ahead to the next wave of technology, European leaders have staked out a firm commitment to embrace cloud computing, drawing praise from some of the leading U.S. tech trade associations. The European Commission, the executive arm of the European Union, has articulated a multi-prong strategy to boost deployment of cloud technologies among member nations, aiming to address key concerns such as trusted certification, interoperability and collaboration among stakeholders in the public and private sectors. At the highest level, the proposal (available in PDF format) seeks to establish a common set of rules of the road to develop a more cohesive market structure among the various member states for cloud providers. Gen Y will change the rules » Pulse of Week » society » Kyivweekly.com.ua 05.03.2012 | By Hryhoriy Nikonov “This is such a sophisticated and confident generation that we have not seen for years. It will radically change the labor culture in companies,” said Anders Parment of the Stockholm University School of Business and author of the book Employees of the Future that received recognition in Europe in an interview for the German magazine Spiegel The book focuses on the so-called Generation Y – people born after 1980 that entered the new millennium at a young age. Some researchers disappointed by the seeming non-identity and confusion of the previous Generation X are hurrying to call Generation Y, also known as the Millennial Generation (or Millennials), Generation Next, Net Generation, Echo Boomers, the “golden generation”. “Working on the book I conducted surveys among millennials in ten countries of the world.