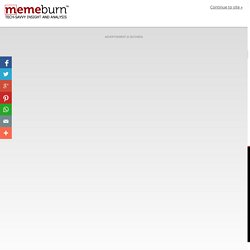 It was a year that demonstrated 3D printing’s potential as more than just a prototyping method and saw cloud computing capabilities stretched and broadened as more companies sought to analyse and exploit big data. Jonathan Wilkins is the marketing manager of European Automation, a supplier of obsolete industrial automation components. A professional brand advocate and commercial marketing strategist, Jonathan focuses on... More The list wouldn’t be complete without mentioning the Internet of Things (IoT). Many are safely predicting these same trends will go from strength to strength in 2015. Wearables Wearable tech has been around for a while, but with the Apple watch being released in April 2015, this could be the year it really takes off. A similar idea recently caught the attention of Daewoo Shipbuilding and Marine Engineering. Deep learning. The Future of Quality Report.

Perspectives What is the Future of Quality Report?

ASQ has proudly published seven Future of Quality reports since 1996. The Future and Quality’s Place in it. “(Smart Manufacturing) and the roles for new IT capabilities in a manufacturing enterprise must grow from the interoperation of physical, cyber, and workforce elements.” — Jim Davis The good news is that large, complex, unstructured problems are exactly the type of problems that the statistical engineering approach was designed to handle. — Ronald Snee and Roger Hoerl Since 1996, ASQ has published seven Future of Quality reports. 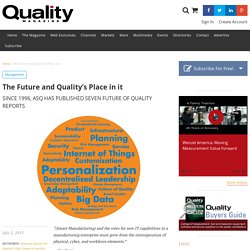 The purpose of the report has always been to challenge the reader’s current ideas and expectations, open him or her to new opportunities, and spark action. The report covers plenty of ground in 88 pages and while the authors approach their respective essays in individual ways, ASQ CEO Bill Troy addressed in his introduction three common themes running through the essays: There is an endless but essential requirement to knock down silos of information in order to get the right information to the right places. Quality is the means to stay afloat and thrive. Internet of Things - The Future is here - Recent Breaking News.

Not very long ago, we all used to watch science fiction movies and laugh at them but most of the gadgets shown in the films are in our hands few years later. 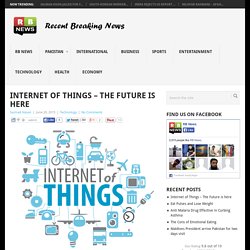 That is how rapidly the technology has evolved. This trend will continue and will lead to new innovative products and services. What is Internet of Things? It is a network of physical and virtual things all of them will have their unique ID and are capable of sensing and performing computational tasks. The term was first used by Kevin Ashton and the concept emerged from ubiquitous computing. According to experts, more than 50 billion objects will become a part of internet of things world by the year 2020. Technology and Working Internet of things relies on Radio Frequency Identification (RFID) technology. Applications Major applications of IoT can be divided into four main categories PersonalEnterpriseUtilitiesMobile Drawbacks and its Solutions As with every technology, IoT also have some disadvantages. Conclusion. Future Insights - Home. Cloud. I have been working very hard trying to identify just what cloud computing is. 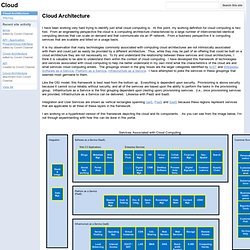 At this point, my working definition for cloud computing is two fold. From an engineering perspecitve the cloud is a computing architecture characterized by a large number of interconnected identical computing devices that can scale on demand and that communicate via an IP network. From a business perspective it is computing services that are scalable and billed on a usage basis. It is my observation that many technologies commonly associated with computing cloud architectures are not intrinsically associated with them and could just as easily be provided by a different architecture.

Thus, while they may be part of an offering that could be built on a cloud architecture they are not necessarily so. Like the OSI model, this framework is best read from the bottom up. I am working on a hyperlinked version of this framework depicting the cloud and its components. It's not complete, but it's getting there. Service Component Reference Model - Consolidated Reference Model v.2.3. The diagram below shows the services that are associated with cloud computing in a framework derived from the NIST/Wikipedia definition of Cloud Computing that focuses on Infrastructure as a Service, Platform as a Service and Software as a Service. 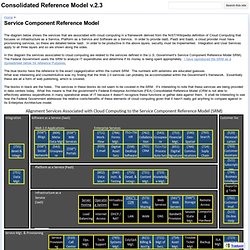 In order to provide IaaS, PaaS and SaaS, a cloud provider must have provisioning services, so these are detailed below IaaS. In order to be productive in the above layers, security must be implemented. Integration and User Services apply to all three layers and so are shown along the sides. The blue blocks have the reference to the exact cagegorization within the current SRM. The numbers with asterisks are educated guesses. What was interesting and counterintuitive was my finding that the Web 2.0 services can probably be accommodated within the Government's framework.

The blocks in black are the holes. This model was developed by Patrick Stingley and may be shared with attribution in accordance with Creative Commons protections.