Do You Google?... It's More Than Just a Search Engine. Extending Face-to-Face Learning Through Cloud Tools. There's an App for That— Google Apps for Education. We Have gOnE GoOgLe at Our School with Google Apps for Education. Supporting 21st Century Learning Through Google Apps. Technology Review: Multimedia Discussions Through VoiceThread. Using VoiceThread to Create Meaningful Receptive and Expressive Learning Activities for Young Children. JTECVoiceThread.pdf. About - Features. Seamlessly integrating VoiceThread into your Learning Management System (LMS) is the key to user happiness. 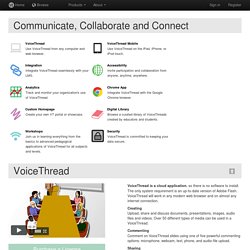 VoiceThread works well within a broad range of systems, but the most powerful option is the standard developed by the IMS Global Learning Consortium called Learning Tools Interoperability (LTI). VoiceThread Extends the Classroom with Interactive Multimedia Albums. Bill Ferriter knew his sixth-grade language arts and social studies students spent time online outside of class, surfing the Web and instant messaging. 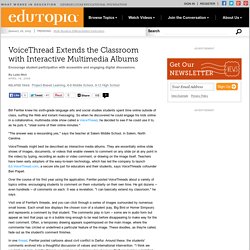 So when he discovered he could engage his kids online in a collaborative, multimedia slide show called a VoiceThread, he decided to see if he could use it to, as he puts it, "steal some of their online minutes. " "The answer was a resounding yes," says the teacher at Salem Middle School, in Salem, North Carolina. VoiceThreads might best be described as interactive media albums. They are essentially online slide shows of images, documents, or videos that enable viewers to comment on any slide (or at any point in the video) by typing, recording an audio or video comment, or drawing on the image itself. 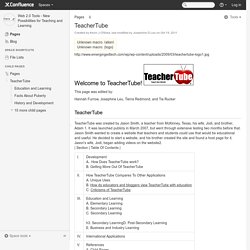 It was launched publicly in March 2007, but went through extensive testing two months before that. Jason Smith wanted to create a website that teachers and students could use that would be educational and useful. Interwrite, TeacherTube Launch School Video Contest. Interwrite, TeacherTube Launch School Video Contest Interwrite Learning, an interactive classroom technology provider, has partnered up with education portal TeacherTube to launch a new video contest for K-12 schools. 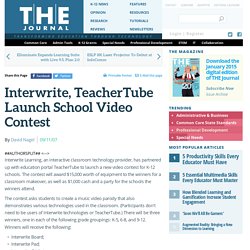 The contest will award $15,000 worth of equipment to the winners for a classroom makeover, as well as $1,000 cash and a party for the schools the winners attend. The contest asks students to create a music video parody that also demonstrates various technologies used in the classroom. (Participants don't need to be users of Interwrite technologies or TeacherTube.) Teachertube.com Site Overview. Certified Site Metrics are metrics that are directly-measured from the website instead of estimated. 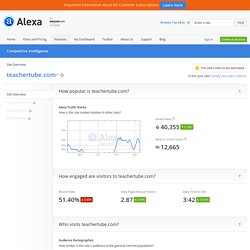 The website owner has installed an Alexa Certify Code on the pages of their site and chosen to show the metrics publicly. For the website owner Certified Metrics provide: A more accurate Alexa RankA private metrics Dashboard for On-Site AnalyticsThe ability to publish unique visitor and pageview counts if desired Certified Metrics are available with all Alexa Pro plans. Not all websites implement our on-site analytics and publish the results.

The more traffic a site gets, the more data we have to calculate estimated metrics. If a site has Certified Metrics instead of estimated, that means its owner has installed code allowing us to directly measure their traffic. Learn more about Alexa's Data Global Rank Alexa Traffic RankAn estimate of this site's popularity. The rank is calculated using a combination of average daily visitors to this site and pageviews on this site over the past 3 months. Teach stars align online. Hagen for News At Intermediate School 296 in Bushwick, David Watson uses TeacherTube to help make student videos. 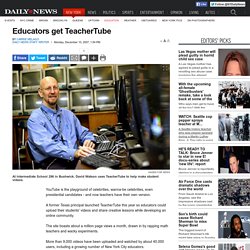 YouTube is the playground of celebrities, wanna-be celebrities, even presidential candidates - and now teachers have their own version. A former Texas principal launched TeacherTube this year so educators could upload their students' videos and share creative lessons while developing an online community. The site boasts about a million page views a month, drawn in by rapping math teachers and wacky experiments. 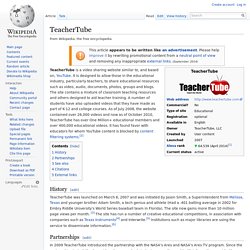 It is designed to allow those in the educational industry, particularly teachers, to share educational resources such as video, audio, documents, photos, groups and blogs. The site contains a mixture of classroom teaching resources and others designed to aid teacher training. A number of students have also uploaded videos that they have made as part of K-12 and college courses. As of July 2008, the website contained over 26,000 videos and now as of October 2010, TeacherTube has over One Million+ educational members and over 400,000 educational videos. It has found favor with educators for whom YouTube content is blocked by content filtering systems.[2] History[edit] Partnerships[edit] In 2009 TeacherTube introduced the partnership with the NASA's Ares and NASA's Ares TV program. Since partnered with TeacherTube in 2007, the American Institute for History Education has grown tremendously.

See also[edit] TeacherTube Is a YouTube for Educators. A while back, I posted a blog entry titled "Online Interactivity for Educators: A Teacher's Tour of YouTube. 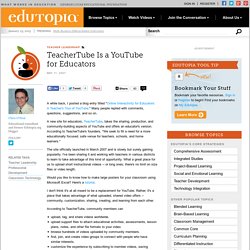 " Many people replied with comments, questions, suggestions, and so on. A new site for educators, TeacherTube, takes the sharing, production, and community-building aspects of YouTube and offers an educator's version. According to TeacherTube's founders, "We seek to fill a need for a more educationally focused, safe venue for teachers, schools, and home learners. " The site officially launched in March 2007 and is slowly but surely gaining popularity.

I've been sharing it and working with teachers in various districts to learn to take advantage of this kind of opportunity. Would you like to know how to make large posters for your classroom using Microsoft Excel? I don't think it's at all meant to be a replacement for YouTube.