Drones - the unmanned future of logistics? - FleetPoint. The future? 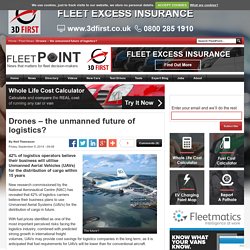 42% of logistics operators believe their business will utilise Unmanned Aerial Vehicles (UAVs) for the distribution of cargo within 15 years New research commissioned by the National Aeronautical Centre (NAC) has revealed that 42% of logistics carriers believe their business plans to use Unmanned Aerial Systems (UAVs) for the distribution of cargo in future. With fuel prices identified as one of the most important perceived risks facing the logistics industry, combined with predicted strong growth in international freight volumes, UAVs may provide cost savings for logistics companies in the long term, as it is anticipated that fuel requirements for UAVs will be lower than for conventional aircraft. The research also reveals over a third (36%) of freight forwarders believe UAVs will be used for the future distribution of cargo. Could Delivery Drones Revolutionize Manufacturing Logistics?

Everywhere you look these days, it seems there’s another ambitious new idea to make commercial drones part of our future. 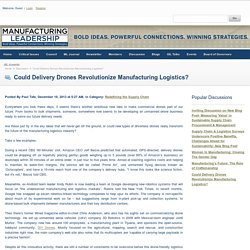 From books to bulk shipments, someone, somewhere now seems to be developing an unmanned drone business ready to serve our future delivery needs. Are these just fly in the sky ideas that will never get off the ground, or could new types of driverless drones really transform the future of the manufacturing logistics industry? Take a few examples: During a recent CBS ’60 Minutes’ slot, Amazon CEO Jeff Bezos predicted that automated, GPS-directed, delivery drones could be dropping off (or hopefully placing gently) goods weighing up to 5 pounds (over 80% of Amazon’s business) on doorsteps within 30 minutes of an online order, in just four to five years time. Meanwhile, ex-Android team leader Andy Rubin is now leading a team at Google developing new robotics systems that will focus on “the underserved manufacturing and logistics markets”, Rubins told the New York Times.

Drones in Logistics: From the Battlefield to your Front Door — J.B. Speed School of Engineering. The Logistics & Distribution Institute at the University of Louisville is pleased to announce an upcoming seminar on one of the hottest topics in distribution—drones. 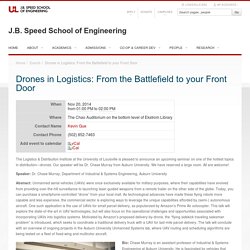 Our speaker will be Dr. Chase Murray from Auburn University. We have reserved a large room. Microdrones - microdrones in logistics – internet of things, unmanned cargo, drone delivery. An airborne first and last-mile network could look as follows: Shipments that arrive from outside the city limits are sorted at existing facilities (hubs, warehouses, cross- docking sites), and shipments meeting certain criteria are separated automatically. 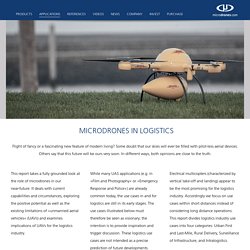 In addition to size, weight, and time criticalness, these criteria could also include dynamic metrics (e.g., current road conditions, air pollution, and network load). A Drone Delivers Your Package? August 26, 2013 Recently, I watched a fascinating show on Nova entitled: “Rise of the Drones” and as usual, I never expected to get a logistics thought out of the show however, as usual, one develops. 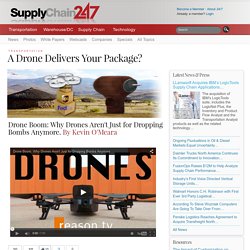 A key scientist (Missy Cummings, former F/18 fighter pilot and now MIT Scientist) being interviewed for the show had actually said “imagine a drone delivering your FedEx, UPS, and your Amazon package…”. Now that got me thinking. First, I had no idea how far the technology for drones has developed in the last 10 years. What they can do and what they are doing is absolutely amazing. Drones for logistic and transport. With the 4th MULTIROTOR generation, service-drone already offers everything that is necessary for a fully autonomous micro-drone flight: 1. 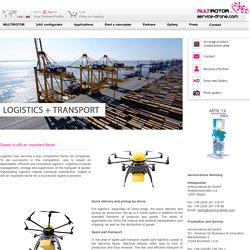 Flight planning softwareWe offer an intelligent and user-friendly flight planning software that allows you to plan your autonomous measurement, video, control or transport flight with a few clicks on your PC or iPad. 2. Drones – The Birth of a New Transportation Mode. When it comes to moving goods from one place to another, you have various transportation options: you can transport products by airplane, train, truck, or ship. 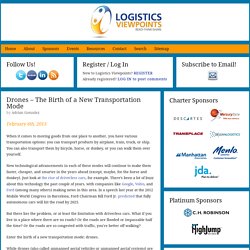 You can also transport them by bicycle, horse, or donkey, or you can walk them over yourself. New technological advancements in each of these modes will continue to make them faster, cheaper, and smarter in the years ahead (except, maybe, for the horse and donkey). Just look at the rise of driverless cars, for example. The Way to Make Delivery Drones Work Is Using...Trucks? Amp Holdings is a company that’s making a hybrid electric delivery truck that costs delivery companies 30 cents per mile to operate, as opposed to the dollar per mile that diesel trucks cost. 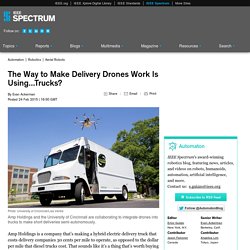 That sounds like it’s a thing that’s worth buying all by itself, but Amp also wants to integrate a delivery drone (called a HorseFly) into each truck to make short deliveries semi-autonomously. So, is using a truck as a base the way to make delivery drones work? Amp’s HorseFly drone system has two primary differentiators to other drone delivery concepts. The future of retail and technology? It's a game of drones - London Life - Life & Style. All of which means that the future of retail and technology — and perhaps much else — is nothing less than a Game of Drones. 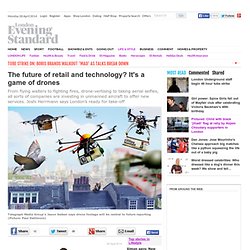 If you’re a major multinational corporation, army or key emergency services provider and you haven’t either invested in a drone manufacturer or at least trialled the things, you’re in danger of looking hopelessly out of step. The emergent drone race worries privacy campaigners, but it raises the prospect of densely populated, high-tech capitals like ours resembling the street scenes in Minority Report before long. “The potential for the technology is enormous, in lots of different areas,” says Peter Lee of law firm Taylor Vinters LLP, who is one of Europe’s leading drone lawyers. Properly referred to as unmanned aircraft or UAVs (unmanned aerial vehicles), drones range upwards from 3kg devices to ones that are about the size of a small plane.

Those heavier than 20kg are banned outside one large area in west Wales and another over Boscombe Down military base. Is crowdsourcing the next revolution in urban accessibility? China Beat Amazon Prime Air To The Commercial Drone Delivery Market. Shortly after Amazon announced on "60 Minutes" Sunday night that it is testing a commercial drone delivery service called Amazon Prime Air, observers breathlessly described it as a groundbreaking development for the retail world. 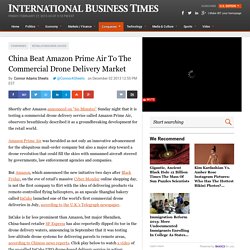 Amazon Prime Air was heralded as not only an innovative advancement for the ubiquitous mail-order company but also a major step toward a drone revolution that could fill the skies with unmanned aircraft steered by governments, law enforcement agencies and companies. But Amazon, which announced the new initiative two days after Black Friday, on the eve of retail's massive Cyber Monday online shopping day, is not the first company to flirt with the idea of delivering products via remote-controlled flying helicopters, as an upscale Shanghai bakery called InCake launched one of the world's first commercial drone deliveries in July, according to the U.K.' Alibaba begins drone delivery trials in China. 4 February 2015Last updated at 10:05 ET By Leo Kelion Technology desk editor Alibaba is using small quadcopter drones to make deliveries to its customers China's biggest internet retailer says it has begun testing drone-based deliveries to hundreds of customers.

It says the trial will last three days and be limited to areas within a one-hour flight of its distribution centres in Beijing, Shanghai and Guangzhou. The company's blog adds that it believes the technology has the potential to speed up deliveries. Amazon, Google and parcel service UPS are among other companies carrying out more private trials of such aircraft. Alibaba tests drone delivery in China with 3-day pilot program. Alibaba is now in the testing phases of delivering packages by drone, according to a post on Taobao’s website (h/t 36kr). Bringing Amazon CEO Jeff Bezos’ dream into reality, Alibaba’s major online marketplace Taobao has partnered with Shanghai YTO Express to run a test program from February 4 to 6. 450 customers will get the chance to have their goods delivered by drone.

The items on the pre-set list of available products include brown sugar, menstrual cramp relief medication, and ginger tea. Edit: An Alibaba spokesperson tells Tech in Asia the offer is limited to just a specific brand of ginger tea which contains brown sugar and is used to treat menstrual cramps. Apologies for the confusion. Drones Are Now Delivering Packages In One Chinese City. China could become the first country to legalize parcel delivery by drone. In building drones that kill people, the US has a couple-decade head start on China. But when it comes to domestic uses, US businesses are hamstrung because the Federal Aviation Administration (FAA) isn’t required to issue commercial drone rules until 2015 . In the meantime, one of China’s biggest delivery companies is tinkering with using drones—with Chinese government permission.

SF Express is testing a drone it has built for delivering packages to remote areas, according to Chinese media reports. This Startup Fights Crime and Delivers Cupcakes Via Drone. There are startups, and then there is whatever the heck Fatdoor is. Raj Abhyanker, Fatdoor’s co-founder and chief executive officer, says his company is a private social network, a mobile app, a drone maker, and a builder of autonomous food delivery robots. Any one of these things could busy a company in and of itself; Silicon Valley has plentiful startups in each category.

Fatdoor, though, wants to be the first company to meld them altogether to fulfill Abhyanker’s dream of letting someone order a pizza, fly a drone in formation with other drones, and report crimes in a neighborhood—all from a single smartphone app. He plans on doing this without any traditional venture capital funding, if need be. Netflix Developing Original Series About Logistics Called "D is for Drones" - Talking Logistics with Adrian Gonzalez. 7 companies that aim to fly high with drone deliveries. Taobao.com Media reports show that Taobao.com, joined by YTO Express, started testing on its drone delivery service on Feb 4. Based on preset destinations and routes, it may only take an hour to get whatever you buy on Taobao.com, the largest online market place in China, according to logistics industry information provider headscm.com. S.F. Express The Chinese company started drone delivery trials in early 2013.

Gofor: Drones On Demand. Garuda Robotics. Customizable Octocopter Wants To Be The Ultimate Delivery Drone. Amazon tests delivery drones at secret Canada site after US frustration. Amazon is testing its drone delivery service at a secret site in Canada, following repeated warnings by the e-commerce giant that it would go outside the US to bypass what it sees as the US federal government’s lethargic approach to the new technology. The largest internet retailer in the world is keeping the location of its new test site closely guarded.

The Secret To Amazon's Efficiency Robots. The economics of Amazon’s delivery drones. Last December there was a lot of skepticism when Jeff Bezos, CEO and founder of Amazon, announced on the 60 minutes TV program that they were looking into using drones for delivering small packages. Amazon Drones and Reverse Logistics - Two Sides of the Logistics Coin. Guest Post by Dr. Robert Gordon, faculty member at American Public University The recent announcement on 60 Minutes by Amazon’s CEO Jeff Bezos to use drones to deliver products via his proposed Amazon Prime Air is sparking the interests of professional logisticians around the globe. What’s most compelling is that Amazon’s announcement does not address potential benefits to the reverse logistics field that drones can offer in the near future. In fact, Amazon might be missing out on a huge potential market.