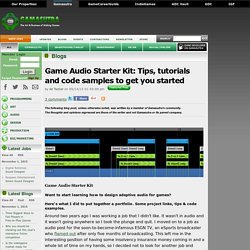 The thoughts and opinions expressed are those of the writer and not Gamasutra or its parent company. Want to start learning how to design adaptive audio for games? Here's what I did to put together a portfolio. Some project links, tips & code examples. Around two years ago I was working a job that I didn't like. But where to start? Start with some hypothetical projects that simulate the skills will you need to create game audio. Sound Replacements are "Meh" The most common way of creating some hypothetical work seems to be taking an existing trailer / gameplay clip and recreating the audio for it. So while there are positive aspects to doing an audio replacement; my issues with the format are simple: You are putting your work up against the best and most experienced designers that the industry has to offer. These are the projects that I found. LIMBO – Wwise Implementation Add the following code: Demystifying Audio Middleware for Mobile Games - Somatone Interactive, Inc. 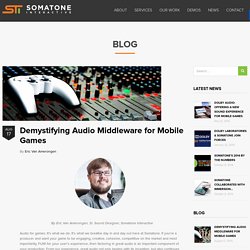 Sound Designer, Somatone Interactive Audio for games: It’s what we do. It’s what we breathe day in and day out here at Somatone. If you’re a producer and want your game to be engaging, creative, cohesive, competitive on the market and most importantly, FUN! For your user’s experience, then factoring in great audio is an important component of your production. Figuring out what will be the best tech to meet your audio needs can be a confusing and time-consuming task.

Tools developed by third parties i.e., Audio Middleware, have been developed to help game designers create rich cutting-edge audio experiences that match the rest of the disciplines being implemented into their games. Leonard Paul on Game Audio Middleware. Danikog.github. Learning Audio Middleware Online: Where to Start? Knowing your way around audio middleware is quickly becoming a required skill to get a job in the game audio industry. 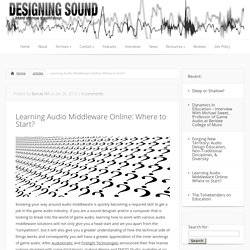 If you are a sound designer and/or a composer that is looking to break into the world of game audio, learning how to work with various audio middleware solutions will not only give you a head start and set you apart from the “competition”, but it will also give you a greater understanding of how the technical side of things works and consequently you will have a greater appreciation of the inner workings of game audio. After Audiokinetic and Firelight Technologies announced their free license options (granted with some limitations), making Wwise and FMOD Studio available at no cost for the indies/small game development companies as of last year, now these programs are being used more than ever. But on the vast sea of knowledge and misinformation that is called the internet, how would you know where to start learning about these programs? $400 per course. Masterclass: Game Audio Middleware. 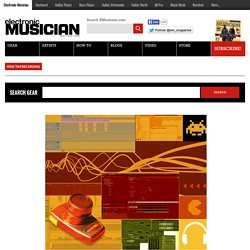 Links to interactive learning materials, and a special exclusive offer for Electronic Musician readers, follow the main text. WE ALL know that videogames are a huge business, which brings new opportunities for composers and sound designers. Maybe you’re a complete newcomer to sound for games, or perhaps you are already creating audio for traditional, linear media like film or televison; but if you’re considering taking the leap into game sound, first you need to understand the process and tools. 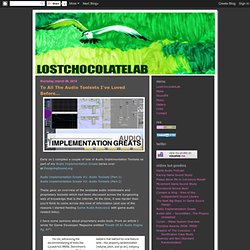 At the time, it was harder than you'd think to come across this kind of information (and one of the reasons I started feeding Game Audio Relevance with game audio related links). I have some opinions about proprietary audio tools. From an article I wrote for Game Developer Magazine entitled "Death Of An Audio Engine Pg. 47": If the continue reading, you'll find I can be forgiving when it comes to the specific needs of a project when it comes to "rolling your own" (and there is still work to be done between the audio toolset and the game engine, make no mistake). -lcl.