Phonopath. This game lets you help a stranded survivor using only your voice. It's a familiar scene. 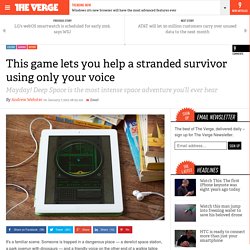 Someone is trapped in a dangerous place — a derelict space station, a park overrun with dinosaurs — and a friendly voice on the other end of a walkie talkie helps guide them to safety. Audio Defence: Zombie Arena Review: Papa Sangre Devs Make You Defend Yourself From The Undead Using Your Ears. (Somethin' Else) Zombies are immortal at this point. 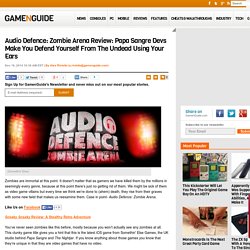 It doesn't matter that as gamers we have killed them by the millions in seemingly every genre, because at this point there’s just no getting rid of them. We might be sick of them as video game villains but every time we think we’re done to (ahem) death, they rise from their graves with some new twist that makes us reexamine them. How one brave audio-only game is harnessing the power of sound - Kill Screen - Videogame Arts & Culture. At first, it was the darkness that terrified me. 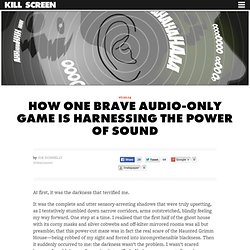 It was the complete and utter sensory-arresting shadows that were truly upsetting, as I tentatively stumbled down narrow corridors, arms outstretched, blindly feeling my way forward. One step at a time. I realised that the first half of the ghost house with its corny masks and silver cobwebs and off-kilter mirrored rooms was all but preamble; that this power-cut maze was in fact the real scare of the Haunted Grimm House—being robbed of my sight and forced into incomprehensible blackness. Then it suddenly occurred to me: the darkness wasn’t the problem. Meet Papa Sangre creator Somethin' Else, the UK studio pioneering audio game development. Audio Defence: Zombie Arena is Somethin’ Else’s intended follow-up to Papa Sangre II. 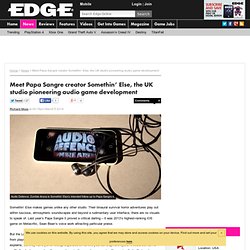 Somethin’ Else makes games unlike any other studio. Their binaural survival horror adventures play out within luscious, atmospheric soundscapes and beyond a rudimentary user interface, there are no visuals to speak of. Last year’s Papa Sangre II proved a critical darling – it was 2013’s highest-ranking iOS game on Metacritic, Sean Bean’s voice work attracting particular praise. But the London developer hasn’t been satisfied with Papa Sangre II’s sales, despite widespread praise from players, press and Apple alike.

It by no means sold poorly, executive producer Nicky Birch explains, but they have yet to recoup expenses on its two-year development cycle. Somethin’ Else’s next audio game is designed explicitly to counteract these market trends. “Every time I ask my friends to play Papa Sangre,” he says, “I have to spend ages explaining to them how to play and what’s the story. Vanished for iPhone 3GS, iPhone 4, iPhone 4S, iPhone 5, iPhone 5c, iPhone 5s, iPad, iPod touch (3rd generation), iPod touch (4th generation) and iPod touch (5th generation) on the iTunes App Store. Deep Sea: The scariest game ever. By JC Fletcher on Mar 12th 2011 8:30PM I don't even know if Wraughk Audio Design's Deep Sea is intended to be scary, but it's more effective at generating real fear than any game I've ever seen. 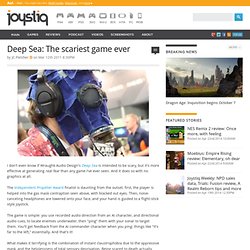 And it does so with no graphics at all. The Independent Propeller Award finalist is daunting from the outset: first, the player is helped into the gas mask contraption seen above, with blacked out eyes. An Indie Adventure Game by Phosfiend Systems. Brian Schmidt's Blog - Making Ear Monsters: Developing a 3D Audio Game. The following blog post, unless otherwise noted, was written by a member of Gamasutra’s community. 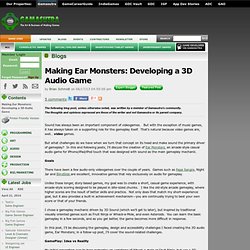 The thoughts and opinions expressed are those of the writer and not Gamasutra or its parent company. Sound has always been an important component of videogames. But with the exception of music games, it has always taken on a supporting role for the gameplay itself. That’s natural because video games are, well… video games. But what challenges do we have when we turn that concept on its head and make sound the primary driver of gameplay? Goals There have been a few audio-only videogames over the couple of years. The intimacy of sound: Robin Arnott's mysterious SoundSelf. For many, the creation of games can be a way to share important personal experiences with others. 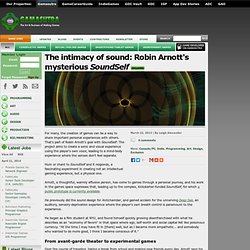 That's part of Robin Arnott's goal with SoundSelf: The project aims to create a sonic and visual experience using the player's own voice, leading to a mind-body experience where the senses don't feel separate. Hum or chant to SoundSelf and it responds, a fascinating experiment in creating not an intellectual gaming experience, but a physical one. Arnott, a thoughtful, warmly effusive person, has come to games through a personal journey, and his work in the games space expresses that, leading up to the complex, Kickstarter-funded SoundSelf, for which a public prototype is currently available.

He previously did the sound design for Antichamber, and gained acclaim for the unnerving Deep Sea, an auditory, sensory-deprivation experience where the player's own breath control is paramount to the experience. The prototype requires only a PC, headphones and a mic. "And they loved it," he says. BlindSide - The Audio Adventure Game. Papa Sangre.