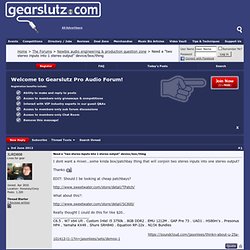 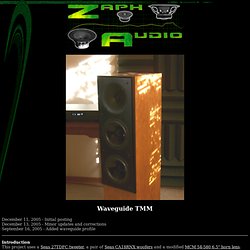 The same waveguide is also for sale at Teptronics if MCM happens to be out of stock. The drivers are configured in a 2.5-way "TMM" format, with a 2nd order Linkwitz-Riley crossover between the tweeter and the woofers. The enclosure is a tall floorstanding tower. Some preliminary research shown on this web site leads up to this design. The Seas CA18RNX is a good quality coated paper midwoofer. The Seas 27TDFC has been a long time favorite of DIY'ers. Oviously, the key to this design is the waveguide. Technical Articles. 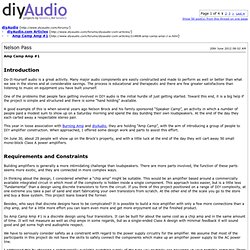 Many major audio components are easily constructed and made to perform as well or better than what we see in the stores and at considerable savings. The process is educational and therapeutic and there are few greater satisfactions than listening to music on equipment you have built yourself. One of the problems that people face getting involved in DIY audio is the initial hurdle of just getting started. Classix II - undefinition. Did you ever eat at a restaurant so upscale that the entrees took several sentences to describe, and contained ingredients so exotic that you wonder if they made them up? 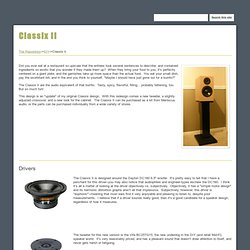 When they bring your food to you, it's perfectly centered on a giant plate, and the garnishes take up more space than the actual food. You eat your small dish, pay the exorbitant bill, and in the end you think to yourself, "Maybe I should have just gone out for a burrito? " The Classix II are the audio equivalent of that burrito. Tasty, spicy, flavorful, filling... probably fattening, too. Speaker Design Works. Fully documented speaker designs: Loudspeaker Designs and Articles for the DIY Enthusiast. 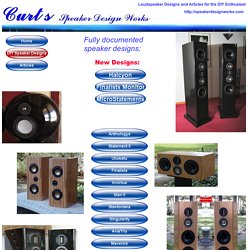 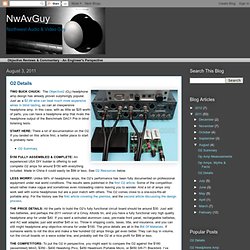 Just as a $2.49 wine can beat much more expensive wines in blind tasting, so can an inexpensive headphone amp. In this case, with as little as $25 worth of parts, you can have a headphone amp that rivals the headphone output of the Benchmark DAC1 Pre in blind listening tests. START HERE: There a lot of documentation on the O2. If you landed on this article first, a better place to start is probably here: O2 Summary $150 FULLY ASSEMBLED & COMPLETE: An experienced USA DIY builder is offering to sell complete O2 amps for around $150 with everything included. LESS WORRY: Unlike 99% of headphone amps, the O2’s performance has been fully documented on professional equipment under real world conditions. THE PRICE DETAILS: All the parts to build the O2’s fully functional circuit board should be around $30. THE RESULT: Even if the O2 loses a challenge, everyone else wins. DiyAudio. DIY Audio & Video - FAQs, Tutorials, and Calculators for Speaker Boxes, Crossovers, Filters, Wiring and more.

MAX Overview. Has anyone ever built a DIY Headphone Tube Amp with professional/audiophile grade results? Looking for a high-quality kit or project to build. : audiophile. Enjoy in your hi-fi project, diy tube amp, amplifier diy, amp diy. Home Made Dual Component Switch Box. RCASwitchBox - ElephantStaircase. Summary Most people only utilize the Video input on the front of their TV’s for video game systems. 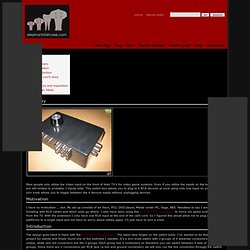 Even if you utilize the inputs on the back you are still limited to probably 3 inputs total. This switch box allows you to plug in 4 RCA devices at once using only one input on your TV. A turn knob allows you to toggle between the 4 devices easily without unplugging devices. Motivation I have no motivation.....but..My set up consists of an Xbox, PS2, DVD player, Media center PC, Sega, NES. Introduction The design goes hand in hand with the RCA to CAT5 converter . Ultrasonic (Ultrasound) Electronic Circuits. Boozhound Laboratories JFET Phono Preamp Kit. The Lure of Vinyl There is no doubt that Long-playing (LP) record albums are not for everyone. 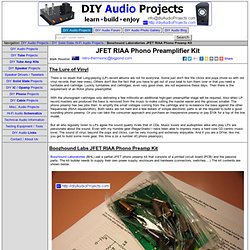 Some just don't like the clicks and pops (more so with old vinyl records than new ones). Others don't like the fact that you have to get out of your seat to turn them over or that you need a turntable and cartridge. Luckily turntables and cartridges, even very good ones, are not expensive these days. Then there is the requirement of an RIAA phono preamplifier.