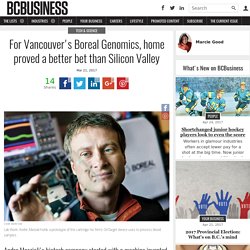 Then his team developed a blood test for cancer One day in September 2014, Andre Marziali gathered his team of 23 scientists in the lunch room of Boreal Genomics Inc. The director of engineering physics at UBC had co-founded the campus-based company, which was working on a technology for early cancer detection. “It was pain and shock for a lot of people, but the first thing that happened is one of the people got up and gave me a hug,” he recalls. For three years, Boreal had tried a more aggressive approach to growth. 2017 HUBB C article The Journal of Precision Medicine. Researchers to develop strain of E.coli to act as ‘kill switch’ for oilsands water pollutants. Bacteria at Work – Designing custom water treatment solutions for Canadian mines

The Canadian mining industry is held to some of the highest environmental regulations and social standards in the world. 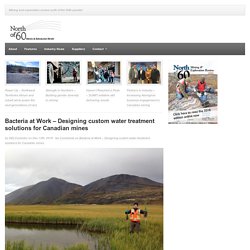 Water protection and management is central to the federal, provincial, and territorial laws that regulate new mines and major expansions, and critically important to all of the peoples who call Canada home. Responsible and sustainable mine design requires minimizing the footprint during operation and preventing any pollution to surrounding waterways after closure and site rehabilitation. Preparing mine-affected waters to be released from a site, in accordance with local regulations and to ensure an ongoing social licence to operate, is a top priority but traditional water treatment plants can be expensive to construct and maintain over time.

“When you look at operating an active water treatment plant, you are consuming electricity, heating large spaces, and need staff on site all the time to operate the facility. “It’s a problem-solving tool,” explains Dr. Canadian tech company targets nanomedicine niche. Precision NanoSystems Inc. has increased its revenue almost 800% since it was founded six years ago by carving out a niche in the biotechnology industry. 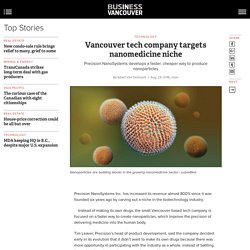 Instead of making its own drugs, the small Vancouver-based tech company is focused on a faster way to create nanoparticles, which improve the precision of delivering medicine into the human body. Tim Leaver, Precision’s head of product development, said the company decided early in its evolution that it didn’t want to make its own drugs because there was more opportunity in participating with the industry as a whole, instead of battling for market share in what is an extremely competitive industry. “We wanted to make our technology accessible to others.” While other biotech firms were competing to make the next great nanomedicine, Precision developed a platform to help researchers create nanoparticles faster and easier.

Ninety-five percent of the cherries grown in Canada grow in BC and it is estimated that eighty percent of new cherry plantings in the world are of Agriculture and Agri-Food Canada varieties developed in BC. In order to maintain a global competitive edge new genomic research is underway to protect BC cultivars. This work uses unique genetic identification rather than relying on visual and taste characteristics alone. “Sequencing new varieties raises the bar in terms of intellectual property protection,” says Nick Ibuki, Operations Manager with Summerland Varieties Corporation (SVC). Current technologies cannot adequately distinguish two closely related cultivars but next generation whole genomic sequencing has the potential to provide the necessary resolution to make that distinction.

Fall 2 2016 Genomics could yield a faster growing tree The Working Forest. 2016 Nov Dec Understand, Adapt, and Act BC Forest Professional Magazine. 16 07 05 Scientists use genomics to design healthier forests BiV. Industry’s 30 by 30 plan targets forestry’s CO2 emissions. Canada’s forest industry is pledging to do its part to fight climate change by reducing Canada’s carbon emissions by 30 megatonnes by 2030. The Forest Products Association of Canada (FPAC) said its “30 by 30” project could account for 13% of the federal government’s total carbon reduction target. But measuring the actual reductions to gauge the success of those targets could prove tricky.

Ken Lertzman, a professor at Simon Fraser University’s School of Resource and Environmental Management, said the devil will be in the details when it comes to reducing forestry’s carbon footprint and measuring the plan’s initiatives to prove they’re working. “The goal is great,” he said. “Forests in the global system play a really important role. However, Werner Kurz, senior research scientist with the Pacific Forestry Centre, said people should not get hung up on numbers.