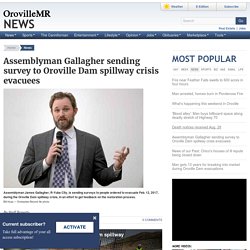 The results will be shared with the state Department of Water Resources, the Federal Energy Regulatory Commission and the State Water Contractors and will be made public. The survey will be sent to all registered voters in the Feb. 12 evacuation areas. It is also possible to take the survey on the assemblyman’s website, “Please take the opportunity to participate in this survey so that we can help structure how to keep our families and our neighborhoods safe from future disasters,” Gallagher said.

“Your input is extremely important in this recovery process, and so I encourage all residents to voice their opinions.” The single page survey includes 14 questions, among them, “Who should pay for the emergency work and reconstruction effort?” Man gets 13 years for breaking into market during Oroville Dam evacuations. Oroville >> A man has been sentenced to 13 years in state prison after pleading no contest to charges he broke into an Oroville market during the Oroville Dam spillway evacuations in February, Butte County District Attorney Mike Ramsey announced Friday. 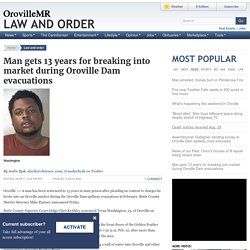 Butte County Superior Court Judge Clare Keithley sentenced Teran Washington, 25, of Oroville on Thursday. Prosecutors accused Washington of blowing out with a shotgun the front doors of the Golden Feather Marketplace in the 700 block of Oro Dam Boulevard West about 7:30 p.m. Feb. 12, after more than 180,000 residents downstream of the dam were ordered to flee the area. Officials feared the dam’s emergency spillway could fail, sending a wall of water into Oroville and other communities along the Feather River. Washington and a juvenile companion allegedly broke into the store to steal cigarettes, prosecutors said. “It seems to me, usually you see that allegation if you’re shooting somebody,” Heithecker said. Washington remained in custody. Oroville Dam ‘green spot’ no cause for alarm, DWR says in new report. Oroville >> The state Department of Water Resources maintains in a report issued Wednesday that the “green spot” on the face of the Oroville Dam is caused by rain and poses no threat to the integrity of the structure. 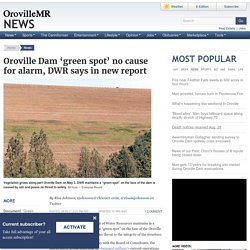 DWR shared its findings on Friday with the Board of Consultants, the independent group analyzing the damaged spillway’s current operations and design plans. The board agreed with DWR’s analysis, said Erin Mellon, DWR assistant director of public affairs, in an email Wednesday. The spot is not a cause for worry because, in part, it is dry in the summer and green in wet months, every year, the 28-page report states.

It also says seepage measurements at the base of the dam have stayed low since original construction. Article148838244. The drought is over, but that doesn’t mean the end of calamity for Northern California. 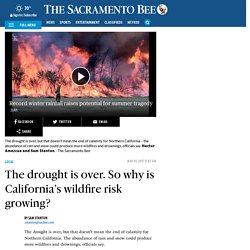 The abundance of rain and snow could produce more wildfires and drownings, officials say. Fires already have burned nearly 10 times as much territory statewide as they did during the same period of 2016. And while forecasters say the record winter rainfall could delay the outbreak of major fires until July or August, it has also fed large swaths of grass, shrubs and other fire fuels that will soon begin drying out in the warmer weather. “Just because the drought is over doesn’t mean the fire danger’s gone,” said Cal Fire spokesman Scott McLean. Evidence of that can be seen just in one fire already this year – the Jayne Fire that erupted the afternoon of April 20 south of Coalinga and within a day had scorched 5,738 acres.

So far this year, Cal Fire says 431 fires have burned 7,245 acres, compared to 553 fires last year at this point that had burned 831 acres. ‘Patch and Pray’ Crack Repairs on Oroville Dam – “They put cement into the cracks and troweled it over,” a Berkeley civil engineer said. “I call it ‘patch and pray” – tobefree. Why we’re getting jacked: Records Show Gov’t Knew of Dangers of Oroville Dam for YEARS — Did Nothing to Fix It! 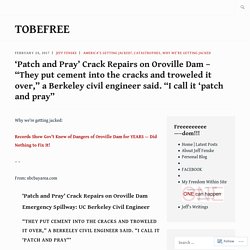 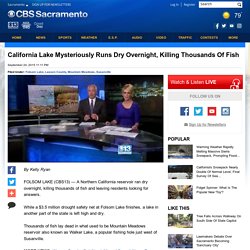 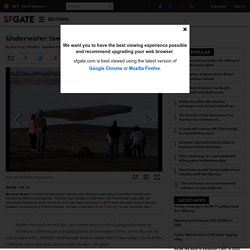 The town was flooded in 1955 when the Folsom Dam was built, but rock-lined foundations and a bunch of rusty nails were uncovered in 2014 when the water level in the lake receded. According to a Folsom resident, the lake would have to be "bone-dry" to see the entire town. less Mormon Island: Currently located under Folsom Lake, Mormon Island was a Gold Rush mining town founded by Mormon prospectors. 2017 California Gold Rush Continued. New flood crisis for Oroville/Shasta, Hi-Temps/Record Snow Melt.

Lake Oroville surges over emergency spillway for first time in history. Shocking Footage! February 13 2017 Lake Oroville Dam Spillway Failure Full Coverage. What You Need To Know About The Oroville Dam Crisis [Must See] Wal-Mart Bottled Water Comes From Sacramento Municipal Supply. Catastrophic California drought causing infestation wave of rodents looking for water. Five pieces of evidence suggesting that California drought may be a HAARP-manufactured event. 5 Corporations Sucking California Dry During the Drought. By Jake Anderson As most people in the country know by now, California is currently suffering from a severe, record-breaking drought. 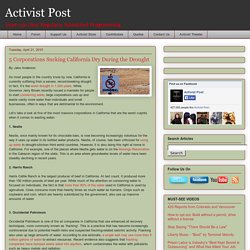 In fact, it’s the worst drought in 1,200 years. While Governor Jerry Brown recently issued a mandate for people to start conserving water, large corporations use up and waste vastly more water than individuals and small businesses, often in ways that are detrimental to the environment. California's water supply headed for collapse in just one year; state has "no contingency plan" - NASA scientist. (NaturalNews) Add California's water supply to your list of "things headed for imminent collapse. 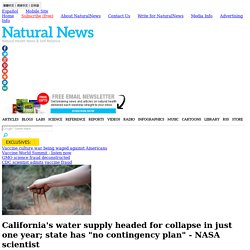 " The state has only one year of reserves remaining, warns Jay Famiglietti, the senior water scientist at the NASA Jet Propulsion Laboratory at Caltech. In a widely-cited LA Times opinion piece, Famiglietti writes that "...the state has only about one year of water supply left in its reservoirs, and our strategic backup supply, groundwater, is rapidly disappearing. Primarywater. Primary Water EXPLAINED - Why We DO NOT Have a Water Shortage. California property values collapse as water shut-offs begin... wealthy community to go dry in days... real estate implosion now inevitable. Steve Quayle - The California Water Shortage and Agenda 21 - March 21st 2015. Forest Service Official Who Let Nestle Drain California Water Now Works for Them. By Claire Bernish An ongoing investigation by The Desert Sun into Nestle’s contentious bottled water operations in drought-stricken California first disclosed that the company’s permit to draw water had a rather astonishing expiration date that occurred over a quarter century ago, in 1988. 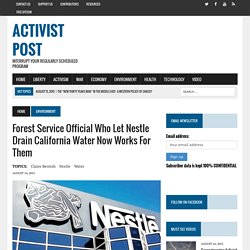 Recently, the Sun reported an update in the investigation with a jaw-dropping twist: the Forest Service — not Nestle — is the agency primarily responsible for failing to renew Nestle’s permit. In fact, judging by the government agency’s complete inability to even review Nestle’s long-expired permit — not to mention the lucrative job a retired Forest Service supervisor currently enjoys — there is an arguable case that collusion and corruption are at the heart of the entire issue.

Geoengineering and the California drought: Gov. Jerry Brown ignores "chemtrail" problem while promoting more tyranny. Parts Of California Have Sunk Over A Foot In Eight Months Due To Drought. Submitted by Mike Krieger via Liberty Blitzkrieg blog, California Dreamin’ this is not. Sounds pretty freakin’ terrifying actually. From Bloomberg: Land in California’s central valley agricultural region sank more than a foot in just eight months in some places as residents and farmers pump more and more groundwater amid a record drought.

The ground near Corcoran, 173 miles (278 kilometers) north of Los Angeles, dropped about 1.6 inches every 30 days. What Drought? Nestle Pays Only $524 To Extract 27,000,000 Gallons Of California Drinking Water. Submitted by Claire Bernish via TheAntiMedia.org, Nestle has found itself more and more frequently in the glare of the California drought-shame spotlight than it would arguably care to be — though not frequently enough, apparently, for the megacorporation to have spontaneously sprouted a conscience. Drought-shaming worked sufficiently enough for Starbucks to stop bottling water in the now-arid state entirely, uprooting its operations all the way to Pennsylvania. But Nestle simply shrugged off public outrage and then upped the ante by increasing its draw from natural springs — most notoriously in the San Bernardino National Forest — with an absurdly expired permit.

Because profit, of course. Or, perhaps more befittingly, theft. California's vanishing lakes: Before-and-after photos reveal the shocking shriveling effect of state's most devastating drought in decades. By Josh Gardner for MailOnline and Reuters Published: 17:56 GMT, 21 August 2014 | Updated: 21:16 GMT, 21 August 2014 California is in the midst of one of its most devastating droughts in history, so the state has been forced to draw from reservoir lakes at an unsustainable rate to supply thirsty households and parched farmers with life-giving water. The result is a landscape transformed. Shocking before and after photos of California's Folsom Lake and Lake Oroville reveal the undeniably shriveling effects of three years of little to no rain up and down the Golden State's vital agricultural belt.

Bridges cross parched pits that where they once spanned blue lakes, boats and docks drift closer and closer into cramped channels where once there was wide open water and dams hold back nothing but air as the state's can do nothing but do what it can to preserve what's left and pray more will soon fall from the sky. California Lake Mysteriously Dries Up Overnight. Residents in Westwood, California are scratching their heads after the Mountain Meadows reservoir, also known as Walker Lake, mysteriously dried up overnight. Drought-Stricken California Slated to Run Out of Water Soon — But is This a Man-Made Crisis? 27th October 2015.