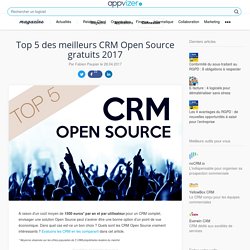 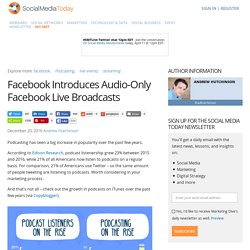 According to Edison Research, podcast listenership grew 23% between 2015 and 2016, while 21% of all Americans now listen to podcasts on a regular basis. For comparison, 21% of Americans use Twitter – so the same amount of people tweeting are listening to podcasts. Worth considering in your marketing process. How to Build and Connect Your Own Chatbot. Microsoft’s CEO Satya Nadella claims that “Bots are the new Apps” with “people-to-people conversations, people-to-digital assistants, people-to-bots and even digital assistants-to-bots” set to become an inventive part of the digital horizon. 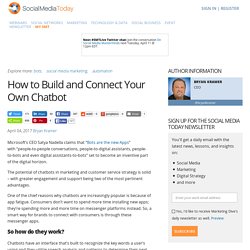 The potential of chatbots in marketing and customer service strategy is solid – with greater engagement and support being two of the most pertinent advantages. One of the chief reasons why chatbots are increasingly popular is because of app fatigue. Consumers don’t want to spend more time installing new apps; they’re spending more and more time on messenger platforms instead. So, a smart way for brands to connect with consumers is through these messenger apps. « Arrêtons de marketer en rond » Nouveau monde, nouveaux modes de vie, nouvelles technologies, nouvelles énergies… Le monde est en transition, mais que fait donc le marketing ? 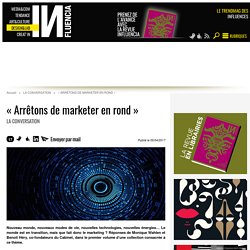 7 Ways to Use Emojis in Social Media Marketing. If you’re not in the habit of greeting good news with a cartoon smiley face, watching other people use emojis might feel like listening to a conversation in a foreign language. 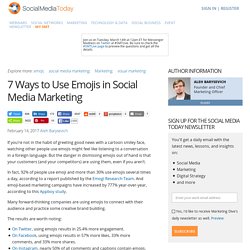 But the danger in dismissing emojis out of hand is that your customers (and your competitors) are using them, even if you aren’t. In fact, 92% of people use emoji and more than 30% use emojis several times a day, according to a report published by the Emogi Research Team. Facebook’s Providing a New Personal Fundraising Option, Expanding Donate Buttons in Facebook Live. Building on the capacity to fuel word of mouth momentum via personal networks, Facebook has announced two new options to help people use the platform for fundraising purposes. 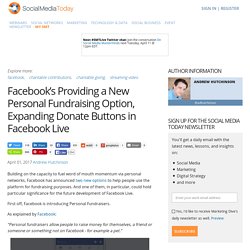 And one of them, in particular, could hold particular significance for the future development of Facebook Live. First off, Facebook is introducing Personal Fundraisers. Make Images, Videos and Web Stories for Free in Minutes. Blog.hootsuite. If you aren’t already incorporating social video into your marketing strategy, it may well be the technical side of things that’s holding you back. 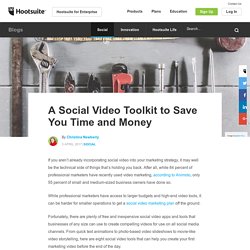 After all, while 84 percent of professional marketers have recently used video marketing, according to Animoto, only 55 percent of small and medium-sized business owners have done so. Facebook's Experimenting with Alternate News Feed to Boost Content Discovery. The presentation of content and tabs in Facebook’s app is an ongoing, ever-evolving experiment, with the platform’s engagement experts using the constant influx of response data to refine, improve and get you coming back to Facebook more and more often. 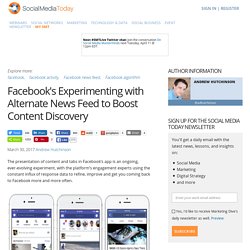 Some variations of Facebook’s tab options And for the most part, the numbers would suggest they get it right – the average time spent, per user, on Facebook’s apps increased from 46 minutes per day in early 2015, to 50 minutes per day a year ago – and that’s despite Facebook adding over 150 million more users in that time. As the platform has evolved, The Social Network’s engineers have learned what works, what needs to be done to test and refine their approach, and how to launch a new element with a high probability of success. Privacy Laws and Listener Data in the Music Industry. You Can Now Add Animated GIFs to Facebook Ads. Here’s a quick one – Facebook has added the capacity to add animated GIFs to ads. 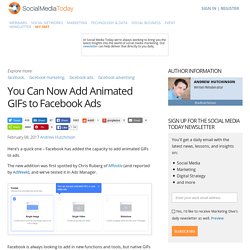 The new addition was first spotted by Chris Ruberg of Affinitiv (and reported by AdWeek), and we’ve tested it in Ads Manager. Facebook is always looking to add in new functions and tools, but native GIFs have long been off-limits within the Facebook News Feed, despite their popularity in Messenger. 5 Underrated Social Media Tasks to Complete Every Day. Wherever you turn, there are social media marketing best practice guides telling you what to do, when to do it, and where to do it. 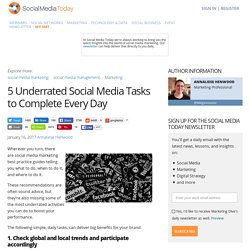 These recommendations are often sound advice, but they’re also missing some of the most underrated activities you can do to boost your performance. The following simple, daily tasks, can deliver big benefits for your brand.​ 1. 30+ Social Media Marketing Stats for 2017 [Infographic] As social media usage continues to grow at a steady rate it’s essential that entrepreneurs and marketers implement a social media marketing strategy for their business - and a key part of any successful strategy is understanding the stats and trends that can affect the outcome of your efforts. To help, the guys at Red Website Design have created this new infographic with a bunch of helpful facts and figures. Some of the key insights provided include: 22% of the world’s population use Facebook, and 76% of those users logged in every day in 2016On any given day Snapchat reaches 41% of 18-34 year olds in the US81% of Millennials check Twitter at least once a day But perhaps the standout figure from the infographic is that 80% of time spent on social media happens on a mobile device.

Facebook Looking to Improve Groups – New Opportunities to Consider. There’s something going on with Facebook Groups. In recent weeks, there have been reports of several new changes and updates being rolled out or tested for the option, with Facebook looking to put more focus on Groups, a move they flagged last year. Back in January 2016, Groups passed the one billion users milestone, beating out both WhatsApp and Messenger to that status - but you likely never heard about that growth. Groups is not solely a separate product like those other two, so it gets less focus, a problem that Facebook has acknowledged, making a commitment to put more effort into improving on what they've labeled an “under-appreciated product”.

And now, we’re starting to see the results of that renewed focus – and while the latest Groups changes may seem small, they could have significant implications, and business benefits. Comment Optimiser La Présence D’Une Marque Sur Les 8 Principaux Réseaux Sociaux En 2016 ? When is the Best Time to Run Facebook Ads? Almost every day you log into your Facebook Business account, you’ll find a new feature. One feature that’s been a mainstay for a while now is Facebook Ad scheduling. In the past, you may have chosen to skip this feature, and instead, set up a daily budget cap to run ads all day long. 5 storytelling triggers that spur your readers to take action. 5 Crazy Hacks to Improve Your Facebook News Feed Reach. Organic reach on Facebook is low and declining, especially with the latest announcement from the social network that’s visited by more than a billion users every day. Facebook will show more videos and pictures posted by family and friends instead of news and other marketing content from brands, businesses, and publishers.

How bad is organic engagement on Facebook? On average, it’s somewhere in the neighborhood of less than 1 percent. Yikes. Every once in a while, one of your posts might still get tons of organic engagement. Video Marketing Trends: 12 Optimization Techniques to Know. If you haven't heard, video is the most engaging type of online content available today. In recent years we've seen brands like Red Bull, Netflix, GoPro, and Cisco achieve massive success with video, using the medium to build awareness, create emotional connection and develop loyalty among their customers. Those businesses that aren’t taking advantage of videos are missing out on a big opportunity.

Consider these stats: 90% of users say that product videos are helpful in the decision-making process - HubSpot100 million users watch online videos every day - Video Brewery80% of all Internet traffic will be streaming video content by 2019 - CiscoOnline video now accounts for 50% of all mobile traffic - business2community But where video content is seeing the most success is in social media, with all the major players, including Facebook, Twitter and even LinkedIn, all introducing new tools to tap into the video trend.

This statistic is for real, proving that having a visual content plan is vital to attracting qualified prospects to your funnel in generating leads and increasing exposure. And with over 600 million active users, Instagram is now a key consideration - not only is the platform buzzing with your target audience, it’s an ideal option for executing your visual strategy. Top brands are successfully using Instagram to boost their brand image, foster follower relationships, and increase revenue.