Gameweek 17 Top Tips. The fixtures are coming thick and fast this festive season, as we look ahead to Gameweek 17 this weekend. 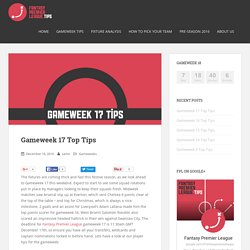 Expect to start to see some squad rotations put in place by managers looking to keep their squads fresh. Midweek matches saw Arsenal slip up at Everton, which sent Chelsea 6 points clear at the top of the table – and top for Christmas, which is always a nice milestone. 2 goals and an assist for Liverpool’s Adam Lallana made him the top points scorer for gameweek 16.

West Brom’s Salomón Rondón also scored an impressive headed hattrick in their win against Swansea City. Gameweek 16 Top Tips. Mid-week Premier League is here so don’t get caught out having not picked your team! 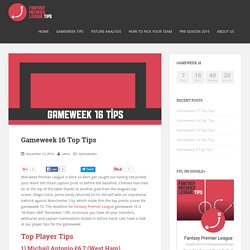 Get those captain picks in before the deadline. Chelsea marched on at the top of the table thanks to another goal from the leagues top scorer, Diego Costa. Gameweek 15 Top Tips. There are transfers aplenty in the lead up to Gameweek 15 of the Fantasy Premier League this weekend. 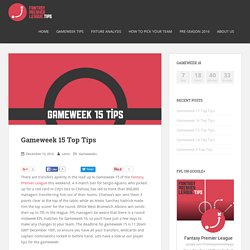 A 4 match ban for Sergio Aguero, who picked up for a red card in City’s loss to Chelsea, has led to more than 800,000 managers transferring him out of their teams. Chelsea’s win sent them 3 points clear at the top of the table, while an Alexis Sanchez hattrick made him the top scorer for the round. While West Bromwich Albions win sends then up to 7th in the league. FPL managers be aware that there is a round midweek EPL matches for Gameweek 16, so you’ll have just a few days to make any changes to your team. The deadline for gameweek 15 is 11:30am GMT December 10th, so ensure you have all your transfers, wildcards and captain nominations locked in before hand. 1) Harry Kane £11.2 (Spurs) Tottenham Hotspur’s main striker, Harry Kane, seems like the most straight forward like for like transfer option for many managers with Sergio Aguero. 2) Victor Anichebe £4.7 (Sunderland) Gameweek 14 Top Tips. We are into the final month of the calendar year for Gameweek 14 of the Fantasy Premier League. 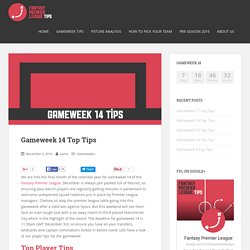 December is always jam packed full of fixtures, so ensuring your bench players are regularly getting minutes is paramount to overcome unexpected squad rotations put in place by Premier League managers. Chelsea sit atop the premier league table going into this gameweek after a solid win against Spurs. But this weekend will see them face an even tough task with a an away match to third placed Manchester City which is the highlight of the round.

The deadline for gameweek 14 is 11:30am GMT December 3rd, so ensure you have all your transfers, wildcards and captain nominations locked in before hand. Gameweek 6 Top Tips. Gameweek 5 Top Tips. It’s a quick turnaround to Gameweek 5 with a Friday night deadline for Chelsea vs Liverpool. 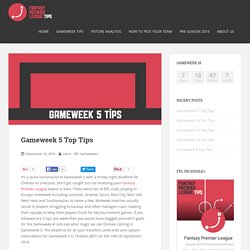 Don’t get caught out not finalizing your Fantasy Premier League teams in time. There were lots of EPL clubs playing in Europe mideweek including Leicester, Arsenal, Spurs, Man City, Man Utd, West Ham and Southampton to name a few. Midweek matches usually result in players struggling to backup and often managers start rotating their squads to keep their players fresh for key tournament games. Gameweek 4 Top Tips. The summer transfer window is now finally shut and players return from the International break for Gameweek 4 of the Fantasy Premier League. 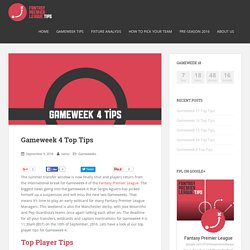 The biggest news going into the gameweek it that Sergio Aguero has picked himself up a suspension and will miss the next two Gameweeks. Gameweek 3 Top Tips. After two rounds of the Premier League season it is shaping up to be all about Jose Mourinho’s Manchester United and Pep Guardiola’s Manchester City. 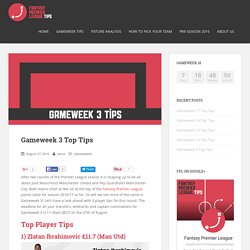 Both teams chief striker sit at the top of the Fantasy Premier League points table for season 2016/17 so far. So will we see more of the same in Gameweek 3? Gameweek 2 Top Tips. 2016-17 FPL League Codes. Roll-up & get your Fantasy Football League Codes! 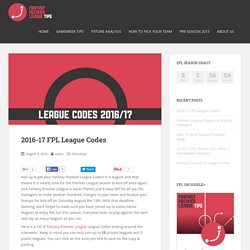 It is August and that means it is nearly time for the Premier League season to kick off once again, and Fantasy Premier League is back! There’s just 8 days left for all you FPL managers to make another hundred changes to your team and finalize your lineups for kick-off on Saturday August the 13th. With that deadline looming, don’t forget to make sure you have joined up to some classic leagues to enjoy the fun this season. Everyone loves to play against the best and top as many leagues as you can. How To Be A Fantasy Football Geek.

For many sports fans around the world like myself, online fantasy sports games allow us to unleash our inner geek. 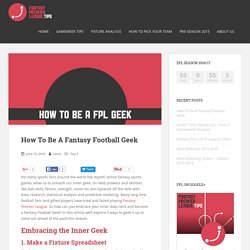 On field prowess and abilities like ball-skills, fitness, strength, vision etc are replaced off the field with data, research, statistical analysis and predictive modeling. Many long time football fans and gifted players have tried and failed playing Fantasy Premier League. So how can you embrace your inner data nerd and become a Fantasy Football Geek? In this article we’ll explore 5 ways to geek it up to come out ahead of the pack this season. 1. The first step is not even just for geeks, all fantasy football players should start off with a spreadsheet of fixtures for the season.

Fixture Difficulty Conditional formatting with a scaled colour scheme based on fixture difficultly is pretty much a must for the geeks out there. 2. Once you’ve covered fixtures planning, it’s then time to keep track of both club form and player form. 3. 4. 5. 2016/17 EPL Fixture List - First 5 Gameweeks Analysis. Today was a key date for the 2016/17 Premier League season, with club fixture schedules released. 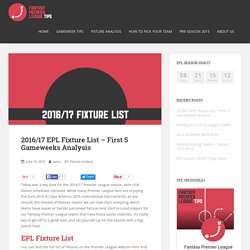 While many Premier League fans are enjoying the Euro 2016 & Copa America 2016 international tournaments, as you should, the release of fixtures means we can now start analyzing which teams have easier or harder perceived fixtures and start to scout players for our Fantasy Premier League teams that have those easier matches. It’s really key to get off to a good start and set yourself up for the season with a big points haul. You can find the full list of fixtures on the Premier League website here and also fixture by club also on PremierLeague.com here. Which Teams Have the Easiest Start? Crystal Palace, Manchester City and Manchester United all look like they have fantastic starts to the season. What teams should I avoid? Watford, Liverpool and Burnley look to have the hardest starts of the season, with each facing at least 3 teams from the top 5 last season. Fantasy Euro 2016 League Codes. There are just a few days until Euro 2016 kicks off in France on Friday the 10th of June, but there is still time to register a team on UEFA’s Official McDonald’s Euro 2016 Fantasy Football website.

For all the fantasy league lovers out there struggling with no Premier League, this will help get you through the European summer. In order to play Fantasy Euro 2016 you will need to register and activate a UEFA.com account (it’s free) if you have not done so previously. Here’s a list of Fantasy Euro 2016 League Codes kicking around the interwebs. Once you have picked your team, visit and join the leagues you wish to: FantasyPremierLeague.Tips League Code is P42251SRP called FPL.Tips.

Which 3 teams were promoted from the Championship for this season? Burnley and Middlesbrough secured automatic promotion to the Premier League, finishing 1st and 2nd respectively in the Sky Bet League Championship last season. The playoff match for the final play is between Hull City and Sheffield Wednesday.