Australia and the world - Australia in brief. Trade Trade liberalisation and economic reform have been at the heart of Australian Government policy for decades. 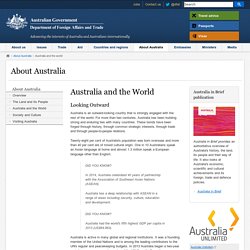 DID YOU KNOW? Australia is the world's largest exporter of iron ore. Until the 1960s, Britain and the United States were Australia's main trading partners. Today the emphasis of Australia's trade has shifted to Asia, with four out of five of Australia's top trading partners located there. Australia has a very open market with minimal restrictions on imports of goods and services. Paper.li – Be a publisher. Battle for Iraq and Syria in maps. Islamic State (IS) militants made some major territorial gains in south-western Syria in 2015 - but they lost several key towns in Iraq, as well as parts of Syria's northern border with Turkey. 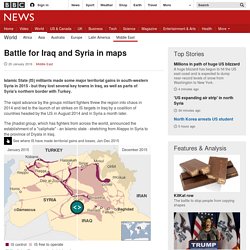 The rapid advance by the groups militant fighters threw the region into chaos in 2014 and led to the launch of air strikes on IS targets in Iraq by a coalition of countries headed by the US in August 2014 and in Syria a month later. Japan’s Economic Outlook: 7 Themes To Watch In 2014. 1. 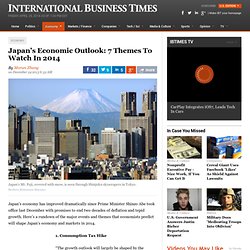 Consumption Tax Hike “The growth outlook will largely be shaped by the consumption tax hike in April,” said Marcel Thieliant at Capital Economics in a note. Bitcoin Goes Boom. It might not have been word of the year for 2013, but “Bitcoin” figured prominently in the shortlists. 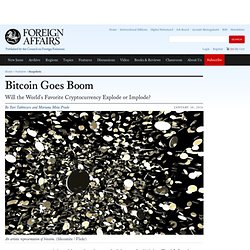 Known formerly only to true geeks, the mysterious cryptocurrency was in the news almost every day. Many of the stories were tales of riches gained and lost: a Norwegian student who discovered that the 5,600 bitcoins he purchased for $24 in 2009 were now worth $700,000; a British man who accidentally threw away a hard drive containing digital keys to bitcoins worth over $6 million. Explosion or Implosion for the World's Favorite Cryptocurrency? It might not have been word of the year for 2013, but “Bitcoin” figured prominently in the shortlists. 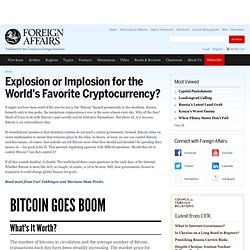 Known formerly only to true geeks, the mysterious cryptocurrency was in the news almost every day. Why all the fuss? Much of it has to do with Bitcoin’s pure novelty and its wild price fluctuations. But above all, it is because Bitcoin is an extraordinary idea. Its foundational premise is that monetary systems do not need a central government. Bitcoin Goes Boom. Explosion or Implosion for the World's Favorite Cryptocurrency? Chinese Demand Sparks Bets on Higher Copper Prices. Bali talks set to showcase WTO’s changing dynamics. Global Diasporas Create Economic Prosperity. The book review in the Wall Street Journal this morning discusses the Robert Guest book, Borderless Economics, which details how global labor movement increases trade, informational flow, communication, and technology. 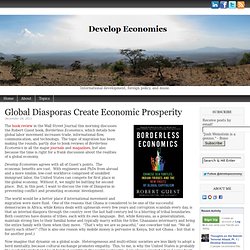 The topic of migration has been making the rounds, partly due to book reviews of Borderless Economics in all the major journals and magazines, but also because the time is right for a frank discussion about the realities of a global economy. Develop Economies agrees with all of Guest’s points. The economic benefits are vast. With engineers and PhDs from abroad and a more nimble, low-cost workforce comprised of unskilled immigrant labor, the United States can compete for first place in the global economy.

Emerging Powers in the Global System: Challenges for Canada (PRB 05-70E) PRB 05-70E Print version (PDF) Prepared by: Gerald Schmitz, Principal Political and Social Affairs Division 27 March 2006 The transfer of power from West to East is gathering pace and soon will dramatically change the context for dealing with international challenges – as well as the challenges themselves. 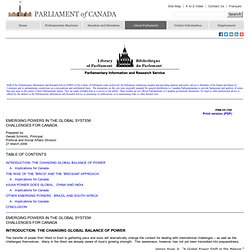 Many in the West are already aware of Asia’s growing strength. ANALYSIS-U.S. "soft power" takes a hit over government shutdown. (Adds Obama comment, paragraphs 9-10) By Paul Taylor PARIS, Oct 17 (Reuters) - A picture spoke volumes about the United States' loss of global prestige and influence due to the shutdown of its government in a partisan standoff over the federal budget and debt. 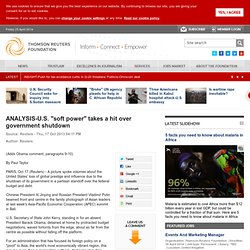 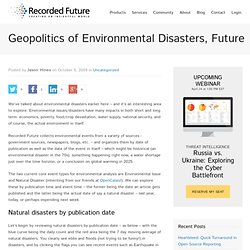 Environmental issues/disasters have many impacts in both short and long term: economics, poverty, food/crop devastation, water supply, national security, and of course, the actual environment in itself. Recorded Future collects environmental events from a variety of sources - government sources, newspapers, blogs, etc. – and organizes them by date of publication as well as the date of the event in itself – which might be historical (an environmental disaster in the 70s), something happening right now, a water shortage just over the time horizon, or a conclusion on global warming in 2025. 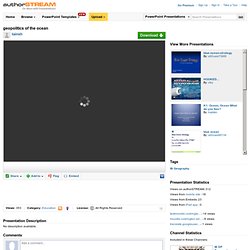 Attempts to deal with problems 2. Geopolitics and emerging problems. Some Issues: Some Issues In recent years there have had to be a number of meetings to discuss problems that cross boundaries and EEZ’s 1972 – Stockholm convention on dumping of waste at sea – aim to urge governments to stop this practice 1996 – The International Maritime Organisation given powers to further enforce this. Peak Exorbitant Privilege. Understanding the "Exorbitant Privilege" of the U.S. Dollar. The dollar rises for the same reason gold and grain rise: scarcity and demand. Which is easier to export: manufactured goods that require shipping ore and oil halfway around the world, smelting the ore into steel and turning the oil into plastics, laboriously fabricating real products and then shipping the finished manufactured goods to the U.S. where fierce pricing competition strips away much of the premium/profit?

Or electronically printing money and exchanging it for real products, steel, oil, etc.? I think we can safely say that creating money out of thin air and "exporting" that is much easier than actually mining, extracting or manufacturing real goods. This astonishing exchange of conjured money for real goods is the heart of the "exorbitant privilege" that accrues to the issuer of the global reserve currency (U.S. dollar).

8 Geographical Pivot Points - By Margaret Slattery. In FP's July/August issue, Robert D. Kaplan writes that the present and future of Pakistan -- perpetually among the top countries on the Failed States Index -- "are still best understood through its geography. " But the troubled Southeast Asian country, precariously situated between India and Central Asia, is not the only region whose prospects for growth and security are affected by natural resources and cartographic positioning. PRISM, meet Tempora: the British spy agency’s program to capture calls, Facebook messages, emails, and more. Why go to Internet companies like Facebook, Google, and Yahoo for their data if you can just intercept it on the world’s network of fiber-optic cables?

That, apparently, is what British spy agency GCHQ is doing, according to new revelations from NSA whistleblower Edward Snowden. According to documents revealed by Snowden to the Guardian, GCHQ has tapped 200 of the world’s fibre optic cables, is surveilling more than 600 million “telephone events” a day, can intercept emails, check Internet users’ access of websites, and can see what people are posting on Facebook. It’s called the Tempora program, and the British agency’s sharing the data with 850,000 NSA employees and private contractors.

According to the latest revelations, Britain actually has greater capabilities than the U.S. spy agencies and few legal constraints, making it a leader among the “five eyes” intelligence community of the U.S., Britain, Canada, Australia, and New Zealand that is processing more metadata than the NSA. The NSA’s top-secret slide deck on XKeyScore, its massive internet surveillance program. The latest revelations from NSA whistleblower Edward Snowden, who is currently seeking political asylum in Russia, hit the Internet today, and they’re staggering. According to Snowden, the NSA has the capability to wiretap anyone, see real-time Internet browsing, monitor Facebook chat, and much more. The Future of Sino-Japanese Competition at Sea. Over the past few years China’s rise has become even more noticeable than before, partly as a result of the fiscal crises affecting the United States and European countries.

The Deepening of the Japan-US Alliance. Snowden fallout: Congress up in arms over NSA, but divided on what to do. Congress is poised to take steps to rein in the National Security Agency, amid serial leaks about the agency’s surveillance activities that seemed to take lawmakers and sometimes even President Obama by surprise.

The Last Gold Rush: Coastal Nations Grab for Ocean Floor Riches. It is a dim January day in 2010. PRISM already gave the NSA access to tech giants. Here’s why it wanted more. General Keith Alexander, director of the NSA, testifies at a House Intelligence Committee hearing on Capitol Hill in Washington October 29, 2013. . Why Edward Snowden Is a Hero. Edward Snowden statement: Every call, Internet transaction goes through NSA. Spying scandal: Will the 'five eyes' club open up? US spy leaks: How intelligence is gathered. Executive Orders. Opinion: The real threat to U.S. national security - Richard Haass.