Just The Caffeine Talking: A Lovecraftian Chronology. For no very good reason I found myself making up an internal chronology of H.P. 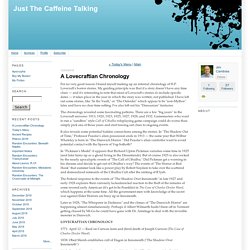 Lovecraft's horror stories. My guiding principle was that if a story doesn't have any time clues — and it's interesting to note that most of Lovecraft's stories do include specific dates — it takes place in the year in which the story was written, not published. I have left out some stories, like "In the Vault," or "The Outsider" which appear to be "non-Mythos" tales and have no clear time setting.

I've also left out his "Dunsanian" fantasies. The chronology revealed some fascinating patterns. It also reveals some potential hidden connections among the stories. In "Pickman's Model" it appears that Richard Upton Pickman vanishes some time in 1925 (and later turns up as a ghoul living in the Dreamlands). Arthur Machen, the H. G. Wells of Horror. Old Gods of Appalachia. To a Dreamer: Best Poems of H. P. Lovecraft - Necronomicon Press. * Hardcovers are limited to one copy per customer *

Atlasobscura. Iä ! Iä ! Cthulhu fhtagn ! Necronomicon Press. The Cthulhu Mythos Part 1: Taxonomy. A Lovecraftian Bestiary. Azathoth “...that last amorphous blight of nethermost confusion which blasphemes and bubbles at the centre of all infinity—the boundless daemon-sultan Azathoth, whose name no lips dare speak aloud, and who gnaws hungrily in inconceivable, unlighted chambers beyond time amidst the muffled, maddening beating of vile drums and the thin, monotonous whine of accursed flutes; to which detestable pounding and piping dance slowly, awkwardly, and absurdly the gigantic ultimate gods, the blind, voiceless, tenebrous, mindless Other Gods whose soul and messenger is the crawling chaos Nyarlathotep.” 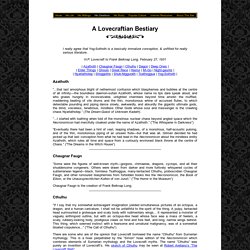 (The Dream-Quest of Unknown Kadath) “...I started with loathing when told of the monstrous nuclear chaos beyond angled space which the Necronomicon had mercifully cloaked under the name of Azathoth.” (“The Whisperer in Darkness”) Nictonomicon Fine Art Prints – The HPLHS Store. Download Issues of "Weird Tales" (1923-1954): The Pioneering Pulp Horror Magazine Features Original Stories by Lovecraft, Bradbury & Many More.

We live in an era of genre. 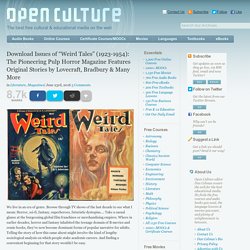 Browse through TV shows of the last decade to see what I mean: Horror, sci-fi, fantasy, superheroes, futuristic dystopias…. Take a casual glance at the burgeoning global film franchises or merchandising empires. Where in earlier decades, horror and fantasy inhabited the teenage domain of B-movies and comic books, they’ve now become dominant forms of popular narrative for adults. Telling the story of how this came about might involve the kind of lengthy sociological analysis on which people stake academic careers. And finding a convenient beginning for that story wouldn’t be easy.

Do we start with The Castle of Otranto, the first Gothic novel, which opened the door for such books as Dracula and Frankenstein? Debuting in 1923, Weird Tales, writes The Pulp Magazines Project, provided “a venue for fiction, poetry and non-fiction on topics ranging from ghost stories to alien invasions to the occult.” Related Content: S. T. Joshi - Blog. August 7, 2016 — Paula Guran on Lovecraft My attention has been drawn to Paula Guran’s anthology The Mammoth Book of Cthulhu (Running Press, 2016). 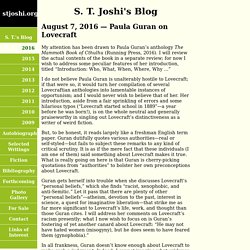 I will review the actual contents of the book in a separate review; for now I wish to address some peculiar features of her introduction, titled “Introduction: Who, What, When, Where, Why …” I do not believe Paula Guran is unalterably hostile to Lovecraft; if that were so, it would turn her compilation of several Lovecraftian anthologies into lamentable instances of opportunism; and I would never wish to believe that of her. Her introduction, aside from a fair sprinkling of errors and some hilarious typos (“Lovecraft started school in 1889”—a year before he was born!) , is on the whole neutral and generally praiseworthy in singling out Lovecraft’s distinctiveness as a writer of weird fiction.

But, to be honest, it reads largely like a freshman English term paper. A New History of the Horror Story: From Homer to Lovecraft. Lovecraft's Fiction - Publication Order. Below is a list of Lovecraft’s fiction, revisions, collaborations, and miscellaneous minor works, in the order they were published. 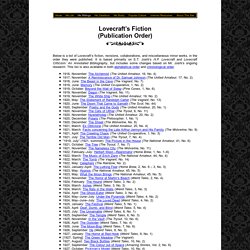 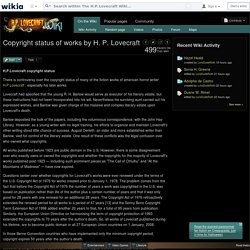 Lovecraft had specified that the young R. H. Barlow would serve as executor of his literary estate, but these instructions had not been incorporated into his will. Nevertheless his surviving aunt carried out his expressed wishes, and Barlow was given charge of the massive and complex literary estate upon Lovecraft's death.