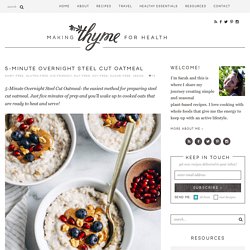 Just five minutes of prep and you’ll wake up to cooked oats that are ready to heat and serve! Oatmeal will forever be my favorite winter breakfast. I love that the warmth forces you to slow down and take your time enjoying each and every bite. That the toppings provide variety and it feels like a meal that’s nourishing you from the inside out.

The only draw back is the time and attention it takes to cook oatmeal. Vegan Peach Pancakes. Chocolate Chip Vegan Buckwheat Pancakes. Vegan Cinnamon Buns for 2. On crisp, cool mornings, cereal + milk just doesn't cut it. 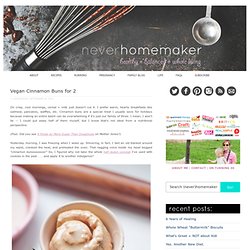 I prefer warm, hearty breakfasts like oatmeal, pancakes, waffles, etc. Millet Porridge with Gingered Rhubarb. I remember always playing in the vegetable garden as a child. 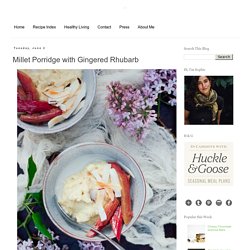 It was this small, fenced in, paradise of overgrown grape vines, wild blackberries, and a little rabbit who would make an appearance on rare occasions. I would traipse through the bed of yellow primroses, duck under the raspberry thickets, and make my way through a canopy of peas to my beloved spot in the garden that was the rhubarb patch. As rhubarb is often the first spring veggie to make an appearance after the long dark winter, it was always one of the most anticipated.

My sister and I would gather what we could from the little plant, and along with the eggs from the hen house, would turn the bounty into the most brilliant rosy rhubarb custard pie (always in time for mothers day). A spring tradition was born. Having rather a delicate (and tart) flavour, rhubarb is often paired alongside other fruit.

Millet. 26 Grains' recipe for Barley porridge with salted caramel pears. As the days get shorter and the mercury drops, it's inevitable that our bellies start aching for food that comforts - especially in the dark, cold mornings. 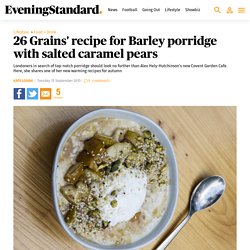 If you like to kickstart your day with a bowl of warming porridge, new Covent Garden cafe 26 Grains, a pop-up that went permanent after a kickstarter appeal, should be on your radar. It was after spending time living in grain-obsessed Copenhagen that founder Alex Hely-Hutchison decided to bring her 'bowls of hygge' to London: "Hygge is a Danish word that doesn't have a direct translation into English, but it evokes warmth and cosiness and everything we believe a bowl of porridge to be. " Deliciously Ella is a fan, so you know she's one to watch. As well as sweet porridges made from a selection of oats, 26 Grains also serves savoury porridges such as chicken, tomoato coconut and egg & kale. such as Below, she shares one of her new recipes for autumn.

Barley Porridge with Salted Caramel Pears, Greek Yogurt and Pistachio Sesame Sprinkle. Salted Rosemary Brownie Batter Oatmeal. A few months ago for my birthday, my BFF Kate gave me a box of chocolates from the vegan company Lagusta’s Luscious. 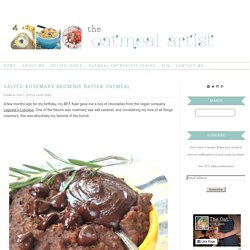 One of the flavors was rosemary sea salt caramel, and considering my love of all things rosemary, this was absolutely my favorite of the bunch. I was reminded of this exotic flavor combo when I saw the recipe for these vegan rosemary sea salt brownies. This needs to be an oatmeal recipe. Guest Recipe: Nordic Spiced Porridge. I’m so excited to share one of Alex form 26 Grain’s porridge recipes with you as she’s really the porridge queen! 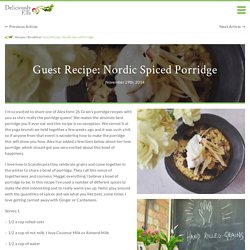 She makes the absolute best porridge you’ll ever eat and this recipe is no exception. We served it at the yoga brunch we held together a few weeks ago and it was such a hit, so if anyone from that event is wondering how to make the porridge this will show you how. Alex has added a few lines below about her love porridge, which should get you very excited about this bowl of happiness.

Mocha Brownie Batter Oatmeal with Almond Butter. I am speechless. 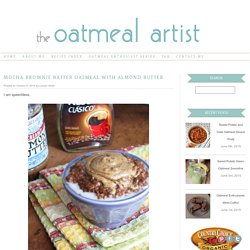 As much as I love my Fudgy Peanut Butter and Banana Oatmeal, I am always trying to come up with variations. “What if I could make this even better?” I always ask myself. You could swap in any nut butter, but almond butter is stunning in this recipe. It works so beautifully with the mocha flavor. Cardamom Spiced Winter Porridge - Dishing Up the Dirt. This simple winter porridge is inspired by one of my favorite pastries from an awesome little bakery in Bend, OR. 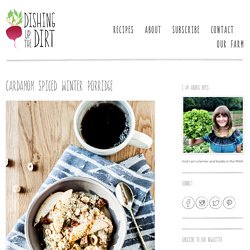 They make this incredible “Ocean Roll” that is made with croissant dough and spiked with a healthy does of cardamom, sugar and vanilla. It’s the best damn pastry I’ve ever had and is one of the reasons we almost moved to Bend instead of Parkdale to farm. The Oatmeal Artist: Sweet Potato Fudge Oatmeal. If you like Brownie Batter Oatmeal (and it appears that most of you do), then you will love this. 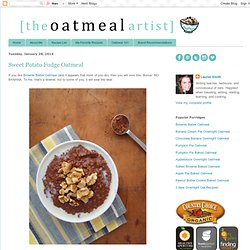 Bonus: NO BANANA. To me, that's a downer, but to some of you, it will seal the deal. Now let's be real. The Oatmeal Artist: Maple Sweet Potato Oatmeal. I think I've overcome my dislike of maple syrup. 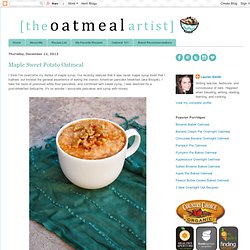 I've recently realized that it was never maple syrup itself that I loathed, but instead the general experience of eating the classic American pancake breakfast (aka Bisquik). I hate the taste of premixed white flour pancakes, and combined with sweet syrup, I was destined for a post-breakfast bellyache. It's no wonder I associate pancakes and syrup with misery. On the other hand, maple syrup and oatmeal has become one of my most beloved ways to start my mornings. Not only does it sweeten an earthy porridge, but it adds an unmatchable flavor that I've truly come to appreciate...maybe a little too much. :)

Porridge d'azukis, châtaignes et avoine, coulis poire-châtaigne. LE PETIT-DÉJEUNER DE LA DEMI-LUNE. Chocolate Teff Porridge — Will Frolic for Food. Porridge d'avoine façon carrot-cake, sans cuisson. N°5, pomme, amande et caroube. Goji Chia Bircher Muesli (& Giveaway Winner) Wow, once you start, it can be hard to stop. I may have unrawified the quinoa wraps, but I have been noshing on lots of great raw eats all week. I also ventured away from my standard chocolate oats, and re-entered overnight oats territory. For some odd reason, I usually only eat overnight oats when I have an empty container of nut butter. The overnight soaking allows you to absorb all the rest of the nut butter on the sides of the jar. Breakfast of the Month: Spiced Amaranth Porridge with Dates and Pecans.

Chilly fall mornings call for piping hot breakfasts. This porridge fits the bill and the added spices make it all the more invigorating. If you’re looking to change up your morning oatmeal routine, give amaranth a go. Though it takes a few extra minutes to cook, its mild, nutty flavor and nutrients make it well worth the time. Pumpkin Pie Amaranth Porridge - My New RootsMy New Roots. Few things make you appreciate food more than being personally connected to it. I first tried harvesting amaranth in California, and quickly understood why it is such a precious (and costly) little seed. The grains are so incredibly tiny, and need to be fully separated from the husk, which takes, oh, forever. The patience and attention to detail required to collect a measly few tablespoons took the better part of an afternoon, no exaggeration. However, the divine pleasure of actually consuming the cooked amaranth was unparalleled.