PEARL, die Echtzeitprogrammiersprache. The Realtime-Programming Language PEARL The name PEARL stands for Process and Experiment Automation Realtime Language and must not be mistaken for Perl, the Practical Extraction and Report Language. 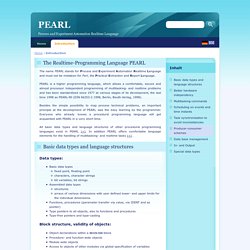 PEARL is a higher programming language, which allows a comfortable, secure and almost processor independent programming of multitasking- and realtime problems and has been standardized since 1977 at various stages of its development, the last time 1998 as PEARL-90 (DIN 66253-2 1998, Berlin, Beuth-Verlag, 1998). Besides the simple possibility to map process technical problems, an important principle at the development of PEARL was the easy learning by the programmer. PseudoD. GitHub - pete/pez: Pez is a Forth dialect based on Atlast, with expanded capabilities and more portability. P* Web Programming Language - Home. Push, PushGP, and Pushpop. Lee SpectorHampshire College Computational Intelligence Lab Push is a programming language (actually a family of languages; see below) designed for evolutionary computation, to be used as the programming language within which evolving programs are expressed. 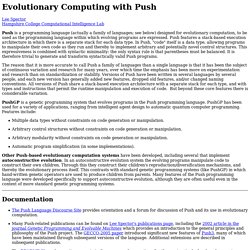 Push features a stack-based execution architecture in which there is a separate stack for each data type. In Push, "code" itself is a data type, allowing programs to manipulate their own code as they run and thereby to implement arbitrary and potentially novel control structures. This expressiveness is combined with syntactic minimality: the only syntax rule is that parentheses must be balanced. It is therefore trivial to generate and transform syntactically valid Push programs. Picat. Pony - High Performance Actor Programming. The Ptolemy Programming Language: Balancing Separation of Concerns and Modular Reasoning. Purpose A software is created to satisfy user needs AKA concerns. 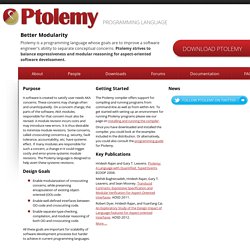 These concerns may change often and unanticipatedly. On a concern change, the parts of the software, AKA modules, responsible for that concern must also be revised. A module revision incurs costs and may introduce new errors. It is thus desirable to minimize module revisions. Design Goals Enable modularization of crosscutting concerns, while preserving encapsulation of existing object-oriented (OO) code. PetaBricks: Programming Language and Compiler. PetaBricks is a new implicitly parallel language and compiler where having multiple implementations of multiple algorithms to solve a problem is the natural way of programming. 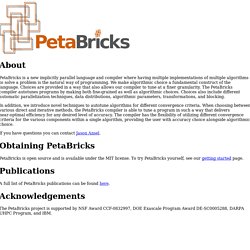 We make algorithmic choice a fundamental construct of the language. Choices are provided in a way that also allows our compiler to tune at a finer granularity. The PetaBricks compiler autotunes programs by making both fine-grained as well as algorithmic choices. Choices also include different automatic parallelization techniques, data distributions, algorithmic parameters, transformations, and blocking. In addition, we introduce novel techniques to autotune algorithms for different convergence criteria. If you have questions you can contact Jason Ansel. PetaBricks is open source and is available under the MIT license. A full list of PetaBricks publications can be found here. 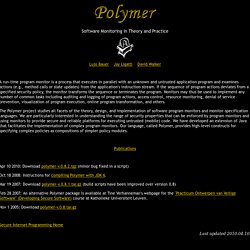 If the sequence of program actions deviates from a specified security policy, the monitor transforms the sequence or terminates the program. Monitors may thus be used to implement any number of common tasks including auditing and logging of program actions, access control, resource monitoring, denial of service prevention, visualization of program execution, online program transformation, and others. The Polymer project studies all facets of the theory, design, and implementation of software program monitors and monitor-specification languages. Publications Apr 10 2010: Download polymer-v.0.8.2.tgz (minor bug fixed in a script) Oct 18 2008: Instructions for compiling Polymer with JDK 6. PADS: A System For Processing Ad Hoc Data. Polyglot extensible compiler framework. Polyglot is a highly extensible compiler front end for the Java programming language. 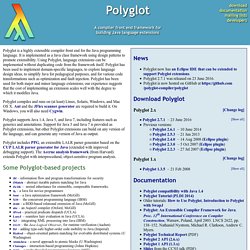 It is implemented as a Java class framework using design patterns to promote extensibility. Using Polyglot, language extensions can be implemented without duplicating code from the framework itself. Polyglot has been used to implement domain-specific languages, to explore language design ideas, to simplify Java for pedagogical purposes, and for various code transformations such as optimization and fault injection. Polyglot has been used for both major and minor language extensions; our experience suggests that the cost of implementing an extension scales well with the degree to which it modifies Java. Polyglot compiles and runs on (at least) Linux, Solaris, Windows, and Mac OS X. PH7 Engine. Linguagem Potigol by potigol. Igor.moochnick - Pash. Programming language - english> Pharo - Welcome to Pharo! PICL: A Programming Language for the Microcontroller PIC. Crcx/parable. FrontPage - parasail. 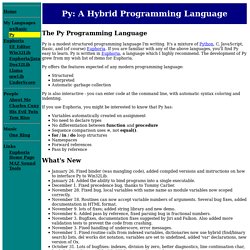 It's a mixture of Python, C, JavaScript, Basic, and (of course) Euphoria. If you are familiar with any of the above languages, you'll find Py easy to learn. P: A language for asynchronous event-driven programming - Home. PiffleWiki - piffle - General information about the project - Piffle, a Packet Filter Language. What is Piffle? 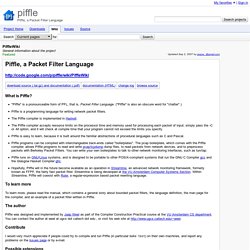 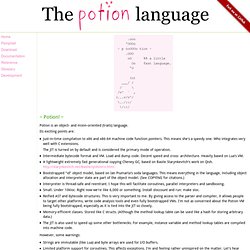 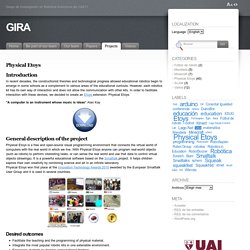 Picky. Picky is a programming language intended for a first course on computer programming. It is more similar to a bicycle with two side-wheels than it is to a motor-bike. You won't probably use it unless you are using it for your first steps in programming. The compiler generates byte-code, interpreted by an abstract machine for portability. Picoc - A very small C interpreter. Pike Programming Language. Piccol - A different embedded scripting language, with static typing. Intro Piccol is a simple, small, strict and statically-typed scripting extension language for embedding into a larger application. Mission statement Why not Lua, Javascript, Scheme, Tcl, Python? Existing extension languages (Lua is a great example) are wonderful, and I use them daily. But they are made for a specific purpose: to allow for easy and rapid prototyping of features, especially by people who are not professional programmers or not very familiar with the app they are trying to extend.

Piccol is made to fill a very different niche. Existing languages are designed to make adding new features easy. Pyret. Processing.org. Wiki: home. A Radical Approach to Software Development If some programming languages claim to be the "Swiss Army Knife of Programming", then PicoLisp may well be called the "Scalpel of Programming": Sharp, accurate, small and lightweight, but also dangerous in the hand of the inexperienced. Perl11/potion. Intoverflow/Potential. Programming language - english> PRISM: PRogramming In Statistical Modeling. Practical Programming Language: reliable code and software developer productivity. What is PPL? PPL is a programming language specifically designed from the ground up to help writing more reliable code in less time. Why should I possibly be interested in PPL? PPL provides a unique combination of effective Fail-fast!

A verifying compiler attempts to prove that the specified properties hold for all possible inputs to the program. For example, a partially specified implementation of Bubble Sort, BubbleSort.pi, contains the typical implementation and a specification that the returned array is sorted. Pi is a simple imperative programming language for writing verified programs. To use πVC, obtain and begin reading a copy of the book; download and install the software; prove some programs; and write, specify, and prove your own programs. Development of πVC was supported by the National Science Foundation under Grant Nos. Code of The Monkey: Code Samples. A type-safe x86-64 systems programming language. PdScript - Precision software & consulting.

PdScript (Precision Delphi Script) is a standalone executable interpreter of Pascal Script language, with a native support for graphical user interface. pdScript interpreter allows you to execute your scripts directly from Windows environment, from the command-line or via dynamically linked interpreter embedded into your application. You can also build a standalone executable applications from your scripts, including an optional encryption of the code.

Made With Prograph List. FlashPascal. IronPhp. Fogus/potion. About PL/B (Databus or DB/C) Llvm-Easter - Object Pascal compiler for LLVM. This is a graduation project to IESB, which is scheduled for delivery in July 2012. The supervisor of this project is Professor Joel Guilherme da Silva Filho. One of the authors of this project also created ExtPascal, which allows the development of Web 2.0 applications with Object Pascal. Objectives Create an Object Pascal compiler following the specifications of the Free Pascal language reference guide and Delphi language guide, which corresponds to Free Pascal 2.6 (Delphi mode) and Delphi XE3.

Use LLVM (Low Level Virtual Machine) compiler backend (multiplatform code generator and optimizer). Motivation The aim of this work is to produce a compiler that can be used to develop real applications, but at the same time can have its source used for teaching purposes, serving as a case for modern building techniques. Limitations Assembly Code (ASM command) directly programmed in Object Pascal source code is not supported. Syntactic differences Without the penultimate semicolon. Pep8-1 - Pep/8 assembler and simulator for the textbook Computer Systems, J. Stanley Warford. The course, Computer Systems, is now available on iTunes U and can be viewed with Apple's new iTunes U app for the iPad and iPhone. Main Page - Pigmeo - .NET/Mono/CLI (C#, VB.NET, C++/CLI, Nemerle...) for microcontrollers (PIC, dsPIC, AVR...) Ucsd pascal. Perl Data Language.