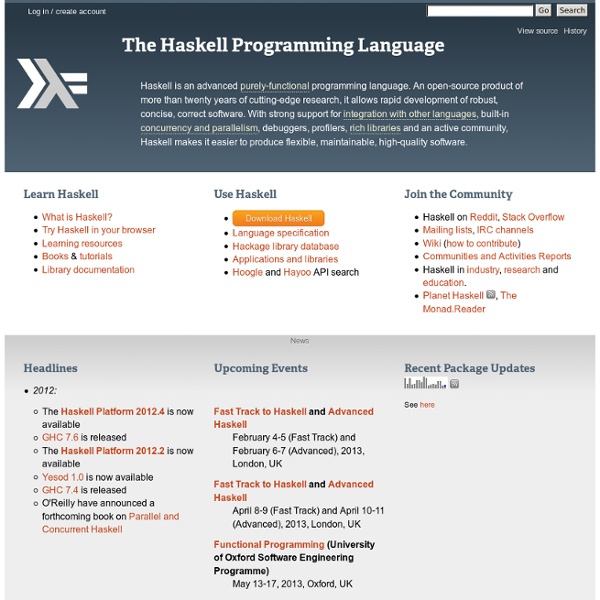 Type theory In mathematics, logic, and computer science, a type theory is any of a class of formal systems, some of which can serve as alternatives to set theory as a foundation for all mathematics. In type theory, every "term" has a "type" and operations are restricted to terms of a certain type. Two well-known type theories that can serve as mathematical foundations are Alonzo Church's typed λ-calculi and Per Martin-Löf's intuitionistic type theory. History[edit] Haskell/Category theory This article attempts to give an overview of category theory, in so far as it applies to Haskell. To this end, Haskell code will be given alongside the mathematical definitions. Absolute rigour is not followed; in its place, we seek to give the reader an intuitive feel for what the concepts of category theory are and how they relate to Haskell. Introduction to categories[edit] A simple category, with three objects A, B and C, three identity morphisms

ometa/ OMeta is a new object-oriented language for pattern matching. It is based on a variant of Parsing Expression Grammars (PEGs) which we have extended to handle arbitrary data types. OMeta's general-purpose pattern matching facilities provide a natural and convenient way for programmers to implement tokenizers, parsers, visitors, and tree transformers, all of which can be extended in interesting ways using familiar object-oriented mechanisms. I am about to release a new version of OMeta/Squeak. Read all about it (and download the release candidate) here. Documentation

Introduction Haskell is a computer programming language. In particular, it is a polymorphically statically typed, lazy, purely functional language, quite different from most other programming languages. The language is named for Haskell Brooks Curry, whose work in mathematical logic serves as a foundation for functional languages. Haskell is based on the lambda calculus, hence the lambda we use as a logo.

Octave GNU Octave is a high-level interpreted language, primarily intended for numerical computations. It provides capabilities for the numerical solution of linear and nonlinear problems, and for performing other numerical experiments. It also provides extensive graphics capabilities for data visualization and manipulation. Octave is normally used through its interactive command line interface, but it can also be used to write non-interactive programs. The Octave language is quite similar to Matlab so that most programs are easily portable.

Lua Implementations LuaDirectory > LuaAddons > LuaImplementations There are quite a few reimplementations of Lua. The simplicity of Lua is a factor in this. Introduction - Learn You a Haskell for Great Good! About this tutorial Welcome to Learn You a Haskell for Great Good! If you're reading this, chances are you want to learn Haskell. Well, you've come to the right place, but let's talk about this tutorial a bit first. I decided to write this because I wanted to solidify my own knowledge of Haskell and because I thought I could help people new to Haskell learn it from my perspective.

MathWorks United Kingdom - MATLAB - The Language of Technical Computing MATLAB® is a high-level language and interactive environment for numerical computation, visualization, and programming. Using MATLAB, you can analyze data, develop algorithms, and create models and applications. The language, tools, and built-in math functions enable you to explore multiple approaches and reach a solution faster than with spreadsheets or traditional programming languages, such as C/C++ or Java™. You can use MATLAB for a range of applications, including signal processing and communications, image and video processing, control systems, test and measurement, computational finance, and computational biology.

Robert Rosen (theoretical biologist) Robert Rosen (June 27, 1934 – December 28, 1998) was an American theoretical biologist and Professor of Biophysics at Dalhousie University.[1] Rosen was born on June 27, 1934 in Brownsville (a section of Brooklyn), in New York City. He studied biology, mathematics, physics, philosophy, and history; particularly, the history of science. In 1959 he obtained a PhD in relational biology, a specialization within the broader field of Mathematical Biology, under the guidance of Professor Nicolas Rashevsky at the University of Chicago. He remained at the University of Chicago until 1964,[2] later moving to the University of Buffalo (now known as the State University of New York (SUNY)) at Buffalo on a full associate professorship, while holding a joint appointment at the Center for Theoretical Biology.

Multiprocessing According to some on-line dictionaries, a multiprocessor is a computer system having two or more processing units (multiple processors) each sharing main memory and peripherals, in order to simultaneously process programs.[4][5] A 2009 textbook defined multiprocessor system similarly, but noting that the processors may share "some or all of the system’s memory and I/O facilities"; it also gave tightly coupled system as a synonymous term.[6] In Flynn's taxonomy, multiprocessors as defined above are MIMD machines.[10][11] As they are normally construed to be tightly coupled (share memory), multiprocessors are not the entire class of MIMD machines, which also contains message passing multicomputer systems.[10] §Pre-history[edit]