The company P. Christopher Sandberg (thecompanyp) The company P. Is a Swedish production company that creates participant based pervasive entertainment . 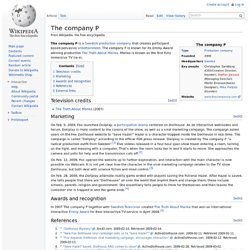 The company P is known for its Emmy Award winning production The Truth About Marika . Marika is known as the first fully immersive TV tie-in. [ edit ] Television credits [ edit ] Marketing On Feb. 9, 2009, Fox launched a participation drama centered on . On Feb. 12, 2009, Fox opened the website up to further exploration, and interaction with the main character is now possible via Webcam. On Feb. 28, 2009, the alternate-reality game ended with players saving the fictional Hazel. . [ edit ] Awards and recognition. C21 Kring, Nokia unveil their Conspiracy. Nokia Point & Find. Mobile apps and services are truly powerful tools. 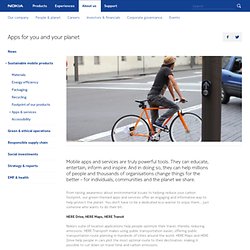 They can educate, entertain, inform and inspire. And in doing so, they can help millions of people and thousands of organisations change things for the better – for individuals, communities and the planet we share. From raising awareness about environmental issues to helping reduce your carbon footprint, our green-themed apps and services offer an engaging and informative way to help protect the planet. You don’t have to be a dedicated eco-warrior to enjoy them… just someone who wants to do their bit.

HERE Drive, HERE Maps, HERE Transit Nokia's suite of location applications help people optimize their travel, thereby reducing emissions. Climate Mission 3D Games are by far the most downloaded applications. In Climate Mission 3D, your goal is to reduce the overall temperature of our planet, degree by degree. Nokia Point & Find (PointandFind) Nokia Point & Find. Dead drop. A dead drop or dead letter box is a method of espionage tradecraft used to pass items between two individuals using a secret location and thus does not require them to meet directly. 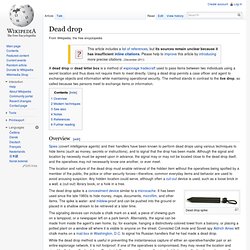 Using a dead drop permits a case officer and agent to exchange objects and information while maintaining operational security. The method stands in contrast to the live drop, so called because two persons meet to exchange items or information. Overview[edit] Spies (covert intelligence agents) and their handlers have been known to perform dead drops using various techniques to hide items (such as money, secrets or instructions), and to signal that the drop has been made. 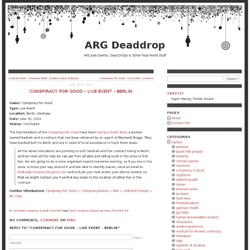 Wikibruce Kring gives you a chance to beHero. Check out this press release from Tim Kring and Nokia, revealing a new social and educational game for change. 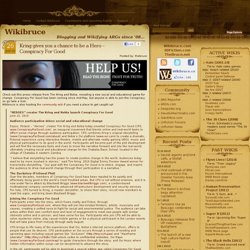 Conspiracy For Good has been running since mid-May, but anyone is able to join the Conspiracy, so go take a look. Wikibruce is also hosting the community wiki if you need a place to get caught up! June 22, 2010 Espoo, Finland – “Heroes” creator Tim Kring and Nokia today unveiled Conspiracy For Good (CFG, www.ConspiracyForGood.com ), an inaugural movement that blends online and real-world tasks to effect social change through audience participation. CFG combines Kring’s original storytelling ( www.ConspiracyForGood.com/about ) and Nokia’s Ovi platform ( www.ovi.com ) to create a dramatic, fictional experience using interactive theatre, mobile and alternate reality gaming (ARG), music and physical participation to do good in the world. ChristopherSandberg TEDxTransmedia. Christopher Sandberg. ChristopherSandberg about how his work with TimKring on The Conspirac. 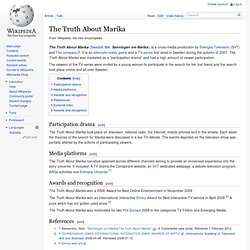 Awards and recognition[edit] The Truth About Marika. The Truth about ARGs: Tales from the Masters. The truth about Marika: Lie or Gesamtkunstwerk? - European Journ. By Eric Karstens Published on August 4, 2009 Crossing the boundaries of conventional media categories and integrating them into one single interconnected experience is all the rage in show business – a bit like what the German intellectuals call a , a synthesis of different art forms. But so far there are not many examples where this has actually worked out.

Frequently, cross-media projects are contrived proofs of concept rather than a truly entertaining and inspiring experience. But are there successful models? The company P Conspiracy ForGood. International Emmy Award winning The company P, joins up with Tim Kring, the creator of Heroes and Nokia, for a new transmedia production - The Conspiracy For Good. {*style:<i><b> </b></i>*} {*style:<i><b>Click to play trailer A several month long international hunt online and in cities all over Europe, reached London in July, 2010. The conclusion of this massive drama came in a series of street events, where the participants determined the outcome of the story, with the help three mobile games downloaded more than 900 000 times.