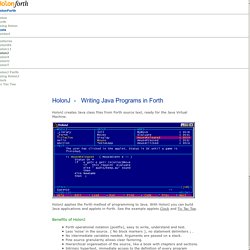 An extended JavaScript: multitier: a single code that runs on the client and the server; builtin HTML: native HTML syntax support and multitier dom. server-side web workers. native websockets. A builtin multi-threaded web server. Hop programs execute in the context of a builtin web server. They define services, which are super JavaScript functions that get automatically invoked when HTTP requests are received. 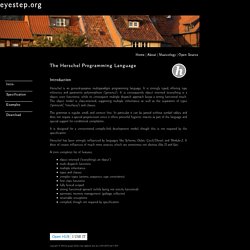 It is strongly typed, offering type inference and parametric polymorphism (generics). It is consequently object oriented (everything is a object, even functions), while its consequent multiple dispatch approach keeps a strong functional touch. The object model is class-oriented, supporting multiple inheritance as well as the separation of types (protocols, interfaces) and classes. The grammar is regular, small, and context free. Browsing Source. Welcome to Hy’s documentation! — hy 0.10.1 documentation. Wiki. Hackety Hack! Hollywood - Multimedia Application Layer.

Hack. The Haste compiler. Harpoon Data Language. NYH Hoc. Hue — a functional programming language for fun & play — Rasmus Andersson. Hue is one of my latest hobby projects that didn’t die after a week. 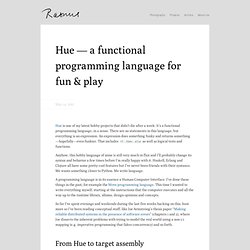 It’s a functional programming language, in a sense. There are no statements in this language, but everything is an expression. An expression does something funky and returns something—hopefully—even funkier. That includes if..then..else as well as logical tests and functions. Anyhow, this hobby language of mine is still very much in flux and I’ll probably change its syntax and behavior a few times before I’m really happy with it. A programming language is in its essence a Human-Computer Interface. So far I’ve spent evenings and weekends during the last five weeks hacking on this, bust more so I’ve been reading conceptual stuff, like Joe Armstrong’s thesis paper “Making reliable distributed systems in the presence of software errors” (chapters 1 and 2), where Joe dissects the inherent problems with trying to model the real world using a non-1:1 mapping (e.g. imperative programming that fakes concurrency) and so forth.

The functional programming language Hope. Hoc - A User Extendable Interactive Language. Same as their counterparts above but the C++ libraries are not included in the resulting executable program. 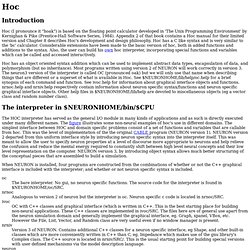 The stand-alone interpreter The rest of this chapter describes the general aspects of the interpreter which are common to all applications that contain it. Although for concreteness we use nrniv or neuron.exe, all the examples and fragments can be typed to any program, eg. oc, that contains the interpreter. Starting the interpreter Hoc is started by typing the program name in a terminal window. nrniv nrniv [filenames] [-] When there are no filename arguments, Hoc takes its commands from the standard input and prints its results on the standard output.

When starting hoc with arguments it is easy to forget the final '-' and be surprised when the program quickly exits, perhaps after putting graphs on the screen. The mswindows version, neuron.exe, does not exit if the trailing '-' is left out. On startup, neuron prints a banner showing the current version and last change date. Names hh pas. The HEX Programming Language. Halide. Hdcaml [HDCaml] The functional programming language Hope. Heron Language Project. Hermes Natural Language Processing. HPGS - HPGL Script. Hannibalcodegenerator - Hannibal Code Generation. "We will either find a way, or make one. 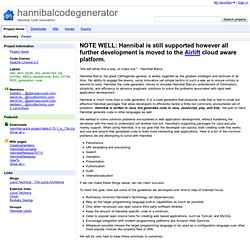 " - Hannibal Barca Hannibal Barca, the great Carthaginian general, is widely regarded as the greatest strategist and tactician of all time. His ability to engage the enemy, using innovative yet simple tactics in such a way as to ensure victory is second to none. Hannibal the code generator, strives to emulate Hannibal Barca's embodiment of minimalism, simplicity, and efficiency to advance pragmatic solutions to solve the problems associated with rapid web application development. Heron-language - The Heron programming language project. Heron is a new general purpose programming language that aims to make large scale programming easier, faster, and safer, while also being appropriate for small scale programming tasks. 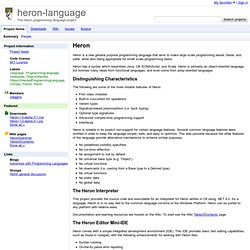 Heron has a syntax which resembles Java, C#, ECMAScript, and Scala. Heron is primarily an object-oriented language, but borrows many ideas from functional languages, and even some from array-oriented languages. Distinguishing Characteristics The following are some of the more notable features of Heron. HaXic - Make Flashgames. Index - Haxe. The Hush Programming Language. Hawk/Ftwalk: Home. General Intelligence Operating System GI-OS. The General Intelligence Operating System, with a goal of making technological host-bodies for incarnation. 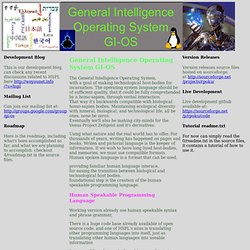 The operating system language should be of sufficient quality, that it could be fully comprehended by a homo-sapien, through verbal interaction. That way it's backwards compatible with biological homo-sapien bodies. Maintaining ecological diversity with mineral, biological, and technological life, all be ones, none be zeros. Eventually we'll also be making city-minds for the Venus Project Zeitgeist and it's derivatives. Using what nature and the real world has to offer. Providing familiar human language interace, for easing the transition between biological and technological host bodies. foundational step is the creation of the human speakable programming language. H Language - Browse Files. Hum Programming Language. HicEst: Windows IDE programming tool with interpreter and compiler for technical/scientific numerics and text applications.