Photo mystery of Jewish assassin used by Nazis to justify Kristallnacht. His assassination of a German diplomat in Paris gave the Nazis the pretext for sanctioning Kristallnacht, the violent pogrom against Jews on 9 November 1938. 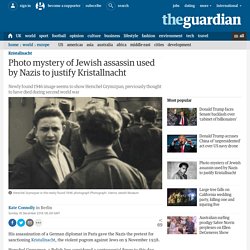 The German Teens Who Rebelled Against Hitler. These adolescents, aged between 12 and 17, hang around late in the evening with musical instruments and young females. 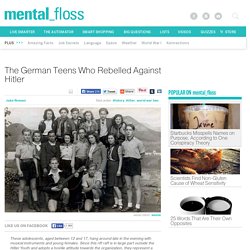 Since this riff raff is in large part outside the Hitler Youth and adopts a hostile attitude towards the organization, they represent a danger to other young people. —Nazi Party Report, Dusseldorf, Germany, July 1943. 5 Online Games That Teach Kids the Art of Persuasion. By Tanner Higgin, Graphite If there’s one thing that games can teach really well, it’s systems thinking. 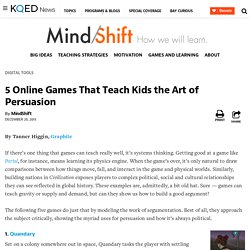 Getting good at a game like Portal, for instance, means learning its physics engine. When the game’s over, it’s only natural to draw comparisons between how things move, fall, and interact in the game and physical worlds. Similarly, building nations in Civilization exposes players to complex political, social and cultural relationships they can see reflected in global history. These examples are, admittedly, a bit old hat. Study: Teachers Believe Brain Myths that Hamper Their Lessons.

By Orion Jones An international survey of school teachers has found that the vast majority believe in myths about the brain — that a student is either left-brained or right-brained, for example — and that adapting their lessons to accommodate these myths can be harmful to a student's education. 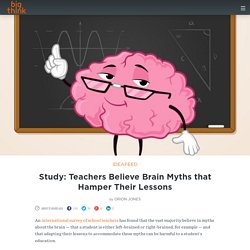 About half of all teachers surveyed from the UK, Holland, Greece, and China believed that humans only use 10 percent of their brains at a given time while 70 percent thought children were either right- or left-brained. The survey, which was conducted at the University of Bristol, UK, and published in Nature Reviews Neuroscience, calls for neuroscientists to communicate better with educators. "The report highlights several areas where new findings from neuroscience are becoming misinterpreted by education, including brain-related ideas regarding early educational investment, brain plasticity, adolescent brain development, and learning disorders such as dyslexia and ADHD. " Tapping Into the Potential of Games and Uninhibited Play for Learning. Part 1 of the MindShift’s Guide to Game-Based Learning. 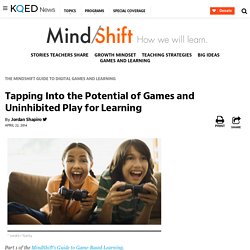 By now, you’ve probably heard the buzzwords: “game-based learning” and “gamification” are pervading headlines in education coverage. Video games have always been popular with kids, but now increasingly, educators are trying to leverage the interactive power of video games for learning. When School Leaders Empower Teachers, Better Ideas Emerge. Lollyman/Flickr Teachers are increasingly being pushed into new roles as their ability to connect online opens up new opportunities. 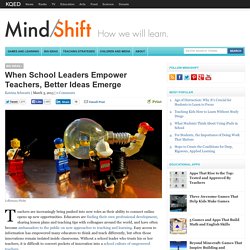 Educators are finding their own professional development, sharing lesson plans and teaching tips with colleagues around the world, and have often become ambassadors to the public on new approaches to teaching and learning. Easy access to information has empowered many educators to think and teach differently, but often those innovations remain isolated inside classrooms. Without a school leader who trusts his or her teachers, it is difficult to convert pockets of innovation into a school culture of empowered teachers. Students Conduct Their Own Groundbreaking Research About Learning. Most education studies involve academic researchers coming into schools trying to figure out the answer to a predetermined question. 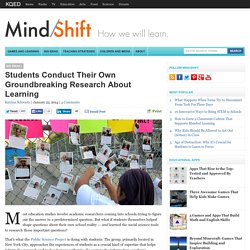 But what if students themselves helped shape questions about their own school reality — and learned the social science tools to research those important questions? That’s what the Public Science Project is doing with students. 10 Innovative Ways to Bring STEM to Schools. Rise of the Robots: STEM-Fueled Competitions Gaining Traction Nationwide. There’s a robotics movement under way at schools across the country, and it’s aimed squarely at developing a passion for STEM education in the kids who need it the most. 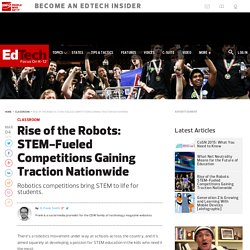 Building robots is a sport for the mind, and, despite being unorthodox, it’s become an officially recognized high school sport in two states, and more states are set to follow. The organization leading this movement — For Inspiration and Recognition of Science and Technology (FIRST) — was founded in 1989 by Dean Kamen, the man behind the Segway. Music for Cats Appeals to Feline Frequencies. By Robert Montenegro McCarthy explains that Snowdon, Savage, and Teie aren't just aiming for Cat Grammys: "The music is part of a larger project to create tunes for many members of the animal kingdom; the team has also created music for tamarin monkeys, which had a soothing effect on the creatures. 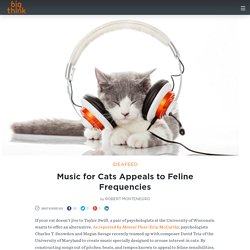 The researchers hope that this species-specific music will enrich the lives of animals in captivity. " Why It’s Imperative to Teach Students How to Question as the Ultimate Surviva... By Warren Berger Friday March 14 is the 135th anniversary of Albert Einstein’s birthday, a good time to think about the importance of asking questions. 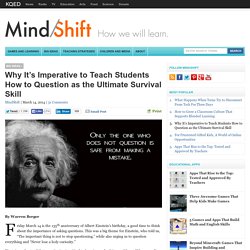 Iconic Psychiatrist Carl Jung on Human Personality in Rare BBC Interview. How to Avoid Work: A 1949 Guide to Doing What You Love. By Maria Popova “Life really begins when you have discovered that you can do anything you want.” “There is an ugliness in being paid for work one does not like,” Anaïs Nin wrote in her diary in 1941. Indeed, finding a sense of purpose and doing what makes the heart sing is one of the greatest human aspirations — and yet too many people remain caught in the hamster wheel of unfulfilling work. In 1949, career counselor William J.

By Robert Montenegro Everyone remembers the one kid in each classroom who loved to hear himself/herself talk (for the purpose of this example we'll call this person something random and totally not steeped in reality or based on a real person: Adrian Spencer). Simple questions like, "What does the green light represent in The Great Gatsby? " A Third Grader’s Plea For More Game-Based Learning. Meet The Girls - This Girl Can. Maya Angelou on Courage and Facing Evil. Absurd Creature of the Week: The Badass Snail That Has a Shell Made of Iron. Dare to step on the scaly-foot snail and your foot will probably snap off…probably.

David Shale. Techniques for Unleashing Student Work from Learning Management Systems. Ari Moore/Flickr By Justin Reich Helping students become networked learners begins by thinking carefully about where we conduct our online learning. Most online learning in higher education and in K-12 takes place in Learning Management Systems (LMS) such as Canvas, Moodle or Blackboard. In higher education in particular, these LMS are designed to scale up the distribution of course materials — by default they are configured to distribute syllabi, course readings and assignments. Student contributions are usually limited to discussion forums and assignment submissions. A Brief History of Romantic Friendship. How Learning Art Alters Brain Structure. The Importance of Low-Stakes Student Feedback. Why It’s Time to Stop Talking And Start Acting to Make Change. Schools aren’t good at innovation, said Grant Lichtman in a TEDx talk given to teachers in Denver. They are big, bureaucratic, risk averse and affected by politics more than smart education policy.

Still, Lichtman spent 89 days driving around the country visiting schools and interviewing teachers, students and administrators about their struggles and solutions to common problems. The five senses of attraction (in TED-Ed GIFs) What’s Going On Inside A Dyslexic Student’s Brain? Why Time Slows Down When We’re Afraid, Speeds Up as We Age, and Gets Warped o... By Maria Popova. 5 Games and Apps That Build Math and English Skills. Letting kids move in class isn’t a break from learning. It IS learning. Why Finnish babies sleep in cardboard boxes. Image copyright Milla Kontkanen. An Anti-Feminist Party Is Standing In The General Election - BuzzFeed News.

The Science of Stress, Orgasm and Creativity: How the Brain and the Vagina Co... How Integrating Arts Into Other Subjects Makes Learning Come Alive. What Motivates Teachers? In an Era of Conflict, Healing the World One Classroom at a Time. The Struggles and Realities of Student-Driven Learning and BYOD. Lost Cat: An Illustrated Meditation on Love, Loss, and What It Means To Be Human. Einstein’s God: Krista Tippett and Theoretical Cosmologist Janna Levin on Fre... World First: Scientists Observe DNA Shuttling Between Cells, Triggering Tumor... Putting the World In Their Hands: Augmented Reality in the Classroom. First New Antibiotic In 30 Years Could Prove Crucial In Fight Against Superbugs. A Long Drawn Out Trip by Gerald Scarfe. The benefits of a good night's sleep - Shai Marcu. Try something new for 30 days - Matt Cutts. 30 Days of “Quantum Poetry” Celebrating the Glory of Science. Q&A: The Teaching Brain : NPR Ed. Einstein on Fairy Tales and Education. Taking a Different Approach to Higher Education.

Arne Duncan asks ‘what if?’ Here’s the response. The Year in Ideas: TED Talks in 2014. How does your brain respond to pain? - Karen D. Davis. How Opening Up Classroom Doors Can Push Education Forward. How the Universe Works: Stephen Hawking’s Theory of Everything, Animated in 1... Quiz Yourself: How Good Are You at Teaching the Art of Learning? Mixing Art and Astrophysics, Students Explore the Universe. A School Day That’s All About Play. Subverting the System: Student and Teacher as Equals. How To Be a Nonconformist: 22 Irreverent Illustrated Steps to Counterculture ...

The Day Dostoyevsky Discovered the Meaning of Life in a Dream. How to Build Your Personal Brand Without Acting Insufferable. The types of leaders we need in education... Why Understanding Obstacles is Essential to Achieving Goals.

A School Built Entirely Around the Love of Math. Design Thinking, Deconstructed. Getting Excited About Engineering with Super-Awesome Sylvia. Education Week. Mental Floss. How To Reap the Most Out of College (Or Any) Education. Gizmodo. FREEDOM. Learning & teaching. Big Think. IFL Science. Edutopia. ViralNova. The Week. Amazing Photos. Mind Unleashed. Drama. ExtremeTech. Travel. Assembly Ideas. Design Projects. How Stuff Works. NASA. Futurama in 3D is absolutely stunning. Nestlé's Peter Brabeck: our attitude towards water needs to change. Where Teens Have the Most Homework. The Difference Between Praise and Feedback. 5 Critical Questions for the Innovative Educator. Why Daydreaming Isn’t a Waste of Time.