Pac-Man (Atari 2600) Differences between versions Pac-Man’s mouth is always moving, unlike how his mouth would not move unless he was moving. 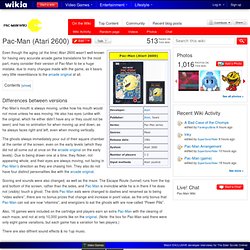 He also has eyes (unlike with the original, which he either didn’t have any or they could not be seen) and has no animation for when moving up and down, as he always faces right and left, even when moving vertically. Scoring and sounds were also changed, as well as the maze. Panzer Dragoon. Panzer Dragoon received positive reviews, both in 1995 and in recent retrospective coverage. 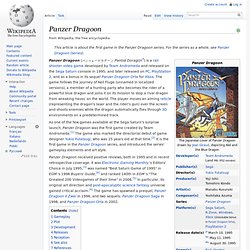 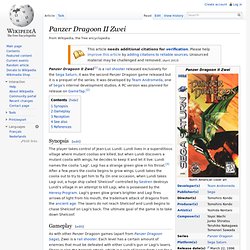 It was developed by Team Andromeda, one of Sega's internal development studios. A PC version was planned for release on GameTap.[2] Synopsis[edit] Paperboy. Paperboy is a 1984 arcade game by Atari Games. 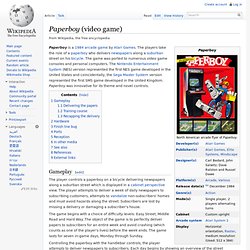 The players take the role of a paperboy who delivers newspapers along a suburban street on his bicycle. The game was ported to numerous video game consoles and personal computers. The Nintendo Entertainment System (NES) version represented the first NES game developed in the United States and coincidentally, the Sega Master System version represented the first SMS game developed in the United Kingdom. Paperboy was innovative for its theme and novel controls. Parachute. Plants vs. Zombies. Pokémon Go. Pokémon Go was released to mixed reviews; critics praised the concept, but criticized technical problems. 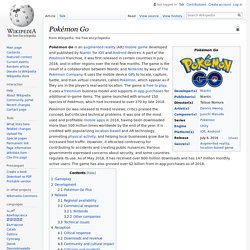 It was one of the most used and profitable mobile apps in 2016, having been downloaded more than 500 million times worldwide by the end of the year. It is credited with popularizing location-based and AR technology, promoting physical activity, and helping local businesses grow due to increased foot traffic. However, it attracted controversy for contributing to accidents and creating public nuisances. Various governments expressed concerns about security, and some countries regulate its use. As of May 2018, it has received over 800 million downloads and has 147 million monthly active users. Gameplay. Pong. Pong (marketed as PONG) is one of the earliest arcade video games; it is a tennis sports game featuring simple two-dimensional graphics. 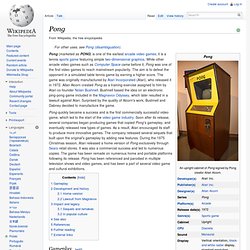 While other arcade video games such as Computer Space came before it, Pong was one of the first video games to reach mainstream popularity. Primal Rage. Primal Rage is a versus fighting game developed and released by Atari Games to arcades in 1994. 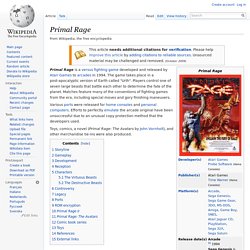 The game takes place in a post-apocalyptic version of Earth called "Urth". Players control one of seven large beasts that battle each other to determine the fate of the planet. Matches feature many of the conventions of fighting games from the era, including special moves and gory finishing maneuvers. Various ports were released for home consoles and personal computers. Efforts to perfectly emulate the arcade original have been unsuccessful due to an unusual copy protection method that the developers used. Toys, comics, a novel (Primal Rage: The Avatars by John Vornholt), and other merchandise tie-ins were also produced. Storyline[edit] A massive meteor strike has devastated the planet Earth. Seven fearsome creatures emerge from their slumber deep within the Urth's crust, and become worshiped as gods by the humans, who form segregated clans beneath the ones they follow.

Prince of Persia. Prince of Persia (commonly abbreviated as POP) is a platform game, originally developed by Jordan Mechner in 1989 for the Apple II, that was widely seen as a great leap forward in the quality of animation seen in computer games. 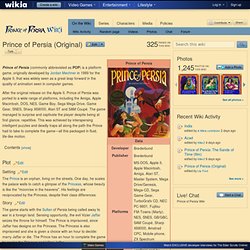 After the original release on the Apple II, Prince of Persia was ported to a wide range of platforms, including the Amiga, Apple Macintosh, DOS, NES, Game Boy, Sega Mega Drive, Game Gear, SNES, Sharp X68000, Atari ST and SAM Coupé. Pro Wrestling. The player chooses a wrestler with unique skills and presses various combinations of buttons to use different wrestling moves. 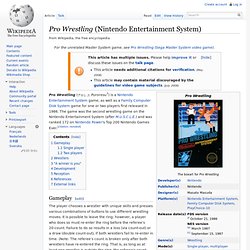 It is possible to leave the ring; however, a player who does so must re-enter the ring before the referee's 20-count. Failure to do so results in a loss (via count-out) or a draw (double count-out), if both wrestlers fail to re-enter in time. (Note: The referee's count is broken only after both wrestlers have re-entered the ring. That is, as long as at least one wrestler is outside the ring, the referee's count continues. Punch-Out!! (arcade) This article is a quality article. 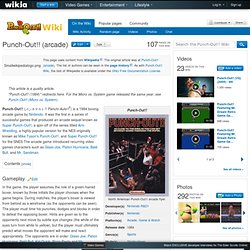