Predictions of an Ice-Free Arctic 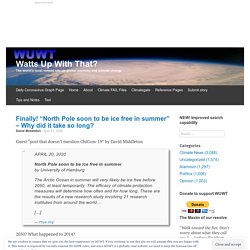 The efficacy of climate-protection measures will determine how often and for how long. These are the results of a new research study involving 21 research institutes from around the world…[…]Phys Org 2050? What happened to 2014? Like this: Arctic To Be Ice-Free, Again. Terrifying predictions about the melting North Pole! Summary: We have had 30 years of bold but false predictions by climate scientists, met by silence from their peers. 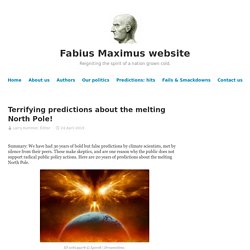 These make skeptics, and are one reason why the public does not support radical public policy actions. Wadhams Wrong Again! By Paul Homewood It’s that time of the year again! 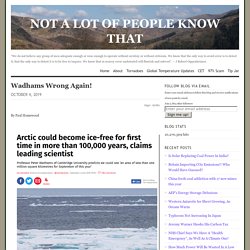 Unfortunately Peter Wadhams is wrong yet again: Ice extent is a bit lower than recent years this September, but it is still well above both 2007 and 2012. DMI, of course, like to show a highly misleading graph, showing an ongoing declining trend, along with cut off y-axis. In reality however, the decline stopped in 2007, and there has been no trend since, merely year to year variation.

Is the choice of 2007 a cherry pick? In other words, 2007 cannot be statistically regarded as an outlier, but integrally connected to following years. As we can see, temperatures around the Arctic have been normal all summer: An ice free Arctic: predict early, predict often. The “Arctic could become ice-free for the first time in more than 100,000 years, claims leading scientist”, that was the surprising title of an article from the Independent. 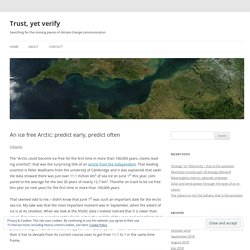 That leading scientist is Peter Wadhams from the university of Cambridge and it was explained that satellite data showed there was just over 11.1 million km2 of sea ice on June 1st this year, compared to the average for the last 30 years of nearly 12.7 km2. Therefor on track to be ice free this year (or next year) for the first time in more than 100,000 years.

That seemed odd to me. Ice-Free Arctic Forecasts. The Deplorable Climate Science Blog "Science is the belief in the ignorance of the experts" – Richard Feynman Skip to content. 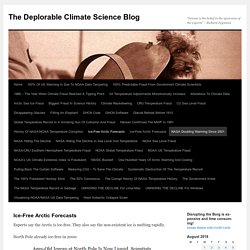 Oh Noes!!! "Crocodiles and Palm Trees in the Arctic? New Report Suggests Yes." “It’s the most dire prediction yet”!!! 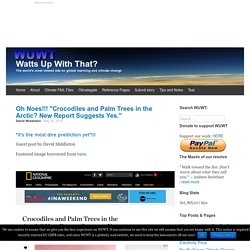 Guest post by David Middleton Featured image borrowed from here. In even the bleakest climate change scenarios for the end of this century, science has offered hope that global warming would eventually slow down. But a new study published Monday snuffs out such hope, projecting temperatures that rise lockstep with carbon emissions until the last drops of oil and lumps of coal are used up.Global temperatures will increase on average by 8 degrees Celsius (14.4 degrees F) over preindustrial levels by 2300 if all of Earth’s fossil fuel resources are burned, adding five trillion metric tons of carbon to the atmosphere, according to the research by Canadian scientists published in Nature Climate Change.

Sham Predictions By NASA, NSIDC, U of Cambridge, VP Al Gore, Sen. John Kerry Exposed. Charlatans exposed…when sham predictions clash with reality Yesterday Japanese blogger Kirye prepared a chart (below) depicting Arctic sea ice volume since 2006, the year Al Gore’s Inconvenient Truth (AIT) was released, and just a year or two before a spate of ice-free-Arctic-by-2013 (or earlier) predictions were issued by a number of “experts”, which of course the fake news media lapped up. 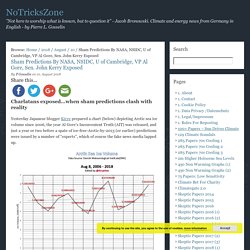 Source: Japanese skeptic blogger Kirye. Arctic did the opposite of what the experts forecast. Charlatans Of The Arctic… Laughing Stock Ice-Free-Arctic Predictions …Fake Science At Its Best. Brimstone and fire predictions of an ice-free Arctic made 10 years ago by leading scientists, politicians and media outlets are emerging today as preposterous. 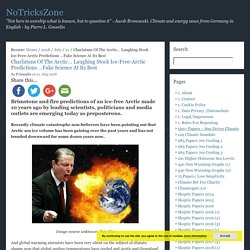 Recently climate catastrophe non-believers have been pointing out that Arctic sea ice volume has been gaining over the past years and has not trended downward for some dozen years now. Image source unknown, Fair Use. And global warming alarmists have been very silent on the subject of climate change now that global surface temperatures have cooled and Arctic and Greenland snow and ice have rebounded. Embarrassed, they don’t want to be reminded of all the absurd predictions they made 10 years ago, with some as recently as just five years ago.

Now is a good time to remind them and ourselves once more of these preposterous, charlatan-quality predictions. ‘Worse than we thought’ – climate models underestimate future polar warming. From the FLORIDA MUSEUM OF NATURAL HISTORY and the “if we make a correction factor, we’ve got funding” department. This map shows Earth’s average global temperature from 2013 to 2017, as compared to a baseline average from 1951 to 1980, according to an analysis by NASA’s Goddard Institute for Space Studies. Yellows, oranges, and reds show regions warmer than the baseline. Note most of the warming it at the north pole, where there are no weather station. Quote of the Week – climate predictions edition. First let’s start with the compulsory quote from the late, great Yogi Berra, who famously said: “It’s tough to make predictions, especially about the future.”― Yogi Berra In response to Eric Worrall’s article about Canadian Environment Minister Catherine McKenna predicting an “ice free” Canada Canadian Environment Minister Catherine McKenna has demanded climate skeptic Hockey commentator Don Cherry think about all the children who might one day not be able to play outdoors on the ice in Canada. 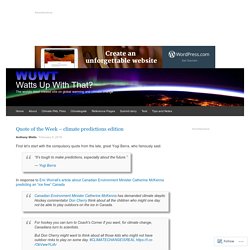 For hockey you can turn to Coach's Corner if you want, for climate change, Canadians turn to scientists.But Don Cherry might want to think about all those kids who might not have outdoor rinks to play on some day. #CLIMATECHANGEISREAL Catherine McKenna (@cathmckenna) February 4, 2018 There’s this response on Twitter by Andy worth repeating as quote of the week: Climate predictions come in two types, those that failed to materialise and those that are yet to fail to materialise. 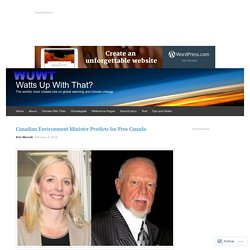 Don Cherry says “cuckaloos” believe in global warmingDon Cherry calls people who believe in global warming ‘cuckaloos’Hailey Montgomery Digital ReporterSunday, February 4, 2018, 6:16 PM – Known to many as the most outspoken man in sports, iconic Canadian commentator and television personality Don Cherry is once again facing criticism after offering input to a discussion well outside of the hockey world.During his CBC Hockey Night in Canada segment Coach’s Corner on Saturday, a day after groundhog Wiarton Willie predicted six more weeks of winter, Cherry implied that Canada’s ongoing cold weather was contradictory to the concept of global warming. Nature proves Al Gore wrong again. Gore’s “ice free Arctic” prediction from five years ago, falsified by nature itself The great bloviator has been pwned again, by the actions of nature itself.

In Germany, five years ago this past Saturday, Al Gore claimed that the ““Entire north polar ice cap will be gone in 5 years” . Click to see the original video, which has been disappeared from YouTube. 'Experts' Say Arctic has Been Ice Free Since 2008 - Principia Scientific International. Published on Written by Tony Heller Measuring from the March 2007 peak to the March 2017 peak (which is the correct way to measure trends) Arctic sea ice extent has expanded about 60 Manhattans per year over the past decade.

Arctic summers ice-free 'by 2013' Scientists in the US have presented one of the most dramatic forecasts yet for the disappearance of Arctic sea ice. Their latest modelling studies indicate northern polar waters could be ice-free in summers within just 5-6 years. Professor Wieslaw Maslowski told an American Geophysical Union meeting that previous projections had underestimated the processes now driving ice loss. Summer melting this year reduced the ice cover to 4.13 million sq km, the smallest ever extent in modern times. Remarkably, this stunning low point was not even incorporated into the model runs of Professor Maslowski and his team, which used data sets from 1979 to 2004 to constrain their future projections.

"Our projection of 2013 for the removal of ice in summer is not accounting for the last two minima, in 2005 and 2007," the researcher from the Naval Postgraduate School, Monterey, California, explained to the BBC. "So given that fact, you can argue that may be our projection of 2013 is already too conservative. " Gore: Polar ice cap may disappear by summer 2014. Updated 2009-12-14 4:36 PM Nobel laureate and former vice president Al Gore reporting on the melting of the Greenland ice sheet on the the 8th day of the UN Climate Change Conference. By Attila Kisbenedek, AFP/Getty Images New computer modeling suggests the Arctic Ocean may be nearly ice-free in summer as early as 2014, Al Gore said today at the U.N. climate conference in Copenhagen. The former vice president said the new projections suggest an almost-vanished summer ice cap could disappear much earlier than foreseen by a U.S. government agency just eight months. "It is hard to capture the astonishment that the experts in the science of ice felt when they saw this," Gore told reporters and other conference participants at a joint briefing with Scandinavian officials and scientists, his first appearance at the two-week session.