Almost Half Of Universities May Be Gone In 5 To 10 Years, Professor Admits. An NYU professor of business surmises that because of the effects of the coronavirus, anywhere from one-quarter to almost one-half of universities in the nation may go out of business in the next five to ten years. 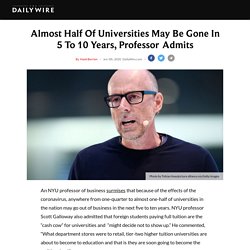 NYU professor Scott Galloway also admitted that foreign students paying full tuition are the “cash cow” for universities and “might decide not to show up.” He commented, “What department stores were to retail, tier-two higher tuition universities are about to become to education and that is they are soon going to become the walking dead.” Hollywood's Top Innovators: 21 People Shaping Future of Entertainment. Friday essay: a real life experiment illuminates the future of books and reading. Books are always transforming. 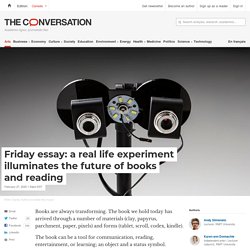 The book we hold today has arrived through a number of materials (clay, papyrus, parchment, paper, pixels) and forms (tablet, scroll, codex, kindle). The book can be a tool for communication, reading, entertainment, or learning; an object and a status symbol. The most recent shift, from print media to digital technology, began around the middle of the 20th century. It culminated in two of the most ambitious projects in the history of the book (at least if we believe the corporate hype): the mass-digitisation of books by Google and the mass-distribution of electronic books by Amazon. How The University Of The Future Must Adapt To Train Future Leaders. These are the hottest startup sectors of the decade.

The top five sectors which are under investors’ radar are , , energy, enterprise applications and auto tech, according to Tracxn. 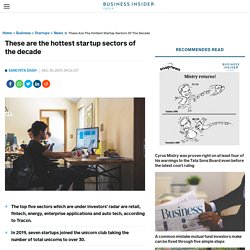 In 2019, seven joined the unicorn club taking the number of total to over 30. As many as 50 startups are lined up as soonicorns or soon-to-be unicorns. Over the decade, Indian startups have grown and how. Not only did they bring in innovative ideas and disrupted many sectors from retail to transport, they also changed the way angel investors and VCs view Indian entrepreneurs. Is Your Brand Ready?: Marketing through OTT Messaging. As digital channels continue to proliferate, there is a seemingly endless number of platforms and communication capabilities that marketers must keep up with. 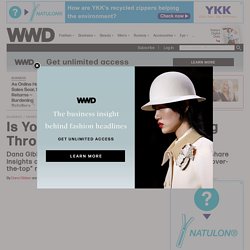 In the “Is Your Brand Ready?” Series, we do the hard work for you, investigating all the latest developments across platforms and battling through the noise to identify the most promising emerging marketing opportunities that are netting impressive real-world results. Our last piece focused on the latest opportunities in social commerce. Here, we distill for you the incredible marketing ecosystem that has evolved across the OTT messaging platforms.

Campaign Backing Virtual Reality Headset Oculus Quest Takes Over an Actual Theater. Moviegoers at a screening of Rogue One: A Star Wars Story in Los Angeles Saturday night got much more than a film and some popcorn. 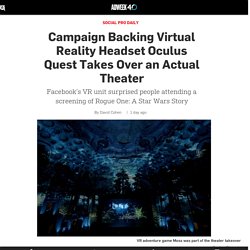 Facebook’s Oculus virtual reality division teamed up with cinematic theater experience provider Cinespia to debut a four-minute immersive experience that enabled attendees to experience all the bells and whistles of VR without a headset. The Los Angeles event marked part of a national ad campaign this holiday season for the Oculus Quest—Facebook’s biggest effort backing VR to date—which also includes television, social and digital. The TV spot debuted earlier this month, directed by Fredrik Bond and featuring actor Eric Wareheim (Tim and Eric Awesome Show, Great Job! , Master of None) portraying the character Reality. Wareheim’s Reality character also interacts online with people, via social and digital channels, commenting on his struggles with VR.

How to Win at YouTube as a Photographer: Advice from the Pros. So you’ve just finished school and now you have a diploma to certify and declare that you’re a bona fide photographer/filmmaker. 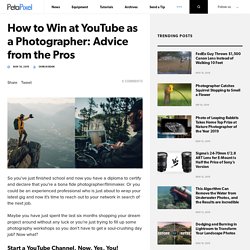 Or you could be an experienced professional who is just about to wrap your latest gig and now it’s time to reach out to your network in search of the next job. Maybe you have just spent the last six months shopping your dream project around without any luck or you’re just trying to fill up some photography workshops so you don’t have to get a soul-crushing day job? Now what? Start a YouTube Channel. Now. Netflix's Worst Nightmare Has Come True. If there were a stock market “hall of fame,” Netflix (NFLX) would be a shoe-in. 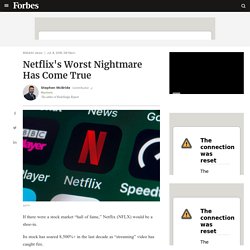 Its stock has soared 8,500%+ in the last decade as “streaming” video has caught fire. Netflix achieved those gains by stealing tens of millions of customers from cable companies. Last year, half of Americans age 22–45 didn’t watch a second of cable TV. And 35 million Americans have dropped cable in the last decade. But it’s time to come to terms with a sad truth... Netflix’s glory days are over. Until recently, Netflix was the only real streaming game in town. Netflix founder Reed Hastings did a lot of things right. In the early 2010s, Netflix signed deals with movie and TV makers like Disney and NBC. George Clooney: 'Hollywood is no longer making the type of films I want to star in'