Aerographite claims title of World's Lightest Solid Material. A microscope image of aerographite, which is now officially the world's lightest solid material (Image: Technical University of Hamburg) While they were each once hailed as the lightest solid material ever made, metallic microlattice and aerogel have now been moved back to second and third place (respectively), with aerographite taking the crown. 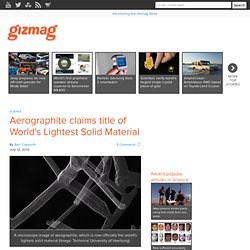 Developed by a team from the Technical University of Hamburg and Germany’s University of Kiel, the material is composed of 99.99 percent air, along with a three-dimensional network of porous carbon nanotubes that were grown into each other. Aerographite has a density of less than 0.2 milligrams per cubic centimeter, which allows it be compressed by a factor of 1,000, then subsequently spring back to its original state. Despite its extremely low density, it is black and optically-opaque in appearance. By contrast, the density of metallic microlattice sits at 0.9 mg per cubic centimeter. About the Author. A bright future – with algae. The diatom Coscinodiscus wailesii has shells that are built out of several layers of silica. 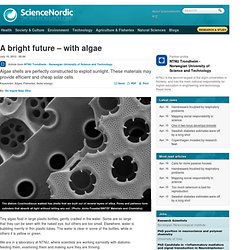 Pores and patterns form cylinders that absorb all light without letting any out. High-tech antifouling paint. Antifouling paints are intended to keep hulls beneath the waterline free of barnacles, seaweed and other organisms, but traditional paints are also devastating on marine environments. 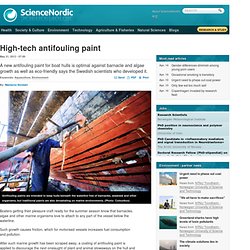 (Photo: Colourbox) Boaters getting their pleasure craft ready for the summer season know that barnacles, algae and other marine organisms love to attach to any part of the vessel below the waterline. Anti Wi-Fi Wallpaper To Go On Sale In 2013, Costs A Tad More Than Normal Ones. A new type of wallpaper, which has been developed by scientists from the "institut polytechnique Grenoble INP" and the "Centre Technique du Papier", will go on sale in 2013 after a Finnish firm, Ahlstrom acquired the license. 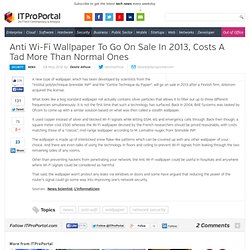 What looks like a bog standard wallpaper roll actually contains silver particles that allows it to filter out up to three different frequencies simultaneously. Non-glare nanotextured multifunctional glass repels water and dust. Glass has a unique look - despite its clarity you can tell there is a material there by the way it reflects light, and that it isn't plastic or crystal. 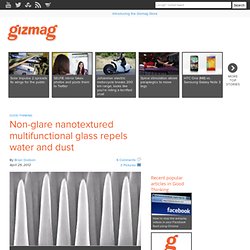 Glass, however, carries problems, like glare, fogging, and collects dirt. A group of MIT researchers has found a new way to create arrays of conical micron-scale surface nanotextures to produce glass that is self-cleaning, non-glare, and non-fogging. The researchers believe the nanotextured surface can be made at low enough cost to be applied to optical devices, the screens of smartphones and televisions, solar panels, car windshields and even windows in buildings. Alcoa announces "smog-eating" architectural panels.

A high-magnification photo of a sand grain containing titanium dioxide in the form of rutile (Photo: Bob Richmond via Flickr) Last week that giant multinational of aluminum production Alcoa announced its new "smog-eating" architectural panels - in other words cladding stuck to a building's exterior that can remove pollutants from the surrounding air. 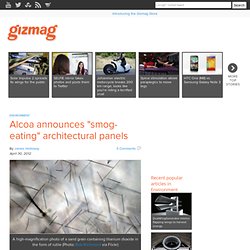 The aluminum panels, branded Reynobond with EcoClean technology, have a titanium dioxide coating which breaks down pollutants in direct sunlight. Of course the purifying properties of titanium dioxide are well known, and have been widely applied, both in so-called self-cleaning applications, such as an experimental cotton treatment; and products such as lightbulbs that purify the air in a room. We've even seen research products to apply titanium dioxide, also known as titania, to water purification systems. Biodegradable fast food containers made from waste straw. A Hong Kong company is selling 100% biodegradable fast food containers, made from waste straw left over after wheat harvesting (Photo via Shutterstock) Image Gallery (2 images) Not only are polystyrene fast food containers usually not recyclable, but they also take eons to break down in a landfill, can emit harmful compounds, and require petroleum to create. 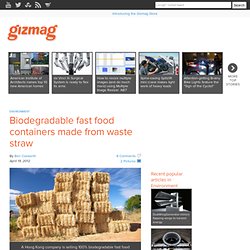 Using paper is one alternative, but Hong Kong-based company Innovasians is now offering another – 100% biodegradable containers made from waste straw left over after wheat harvesting. The straw used in the process comes from China, and would otherwise be burnt. The technology itself is Canadian. EBIT system promises stronger, cheaper plastic parts. EBIT is based around an extrusion blow-molding platform, with an added injection-molding unit Image Gallery (3 images) Many plastic items consist of both blow-molded and injection-molded components that have been welded together. 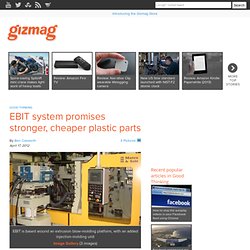 Not only does this require multiple machines and production steps, but the parts may also fail at the weld points. Spanish research center ASCAMM’s new EBIT technology, however, combines the two plastic injection techniques in one process, to efficiently create weld-free parts. Scientist Fiddles With Spider Silk. Students design goop-filled bags to fill potholes. A group of students have created a unique material that they say could be sealed in bags with water, then used to temporarily fill potholes (Photo via Shutterstock) Have you ever mixed corn starch with water? 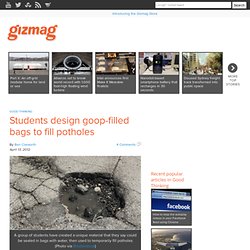 If you have, you probably noticed how it oozed like a liquid when flowing across a surface, yet hardened like a solid if you suddenly struck it. That’s because the corn starch/water mixture is what’s known as a non-Newtonian fluid – the particles it’s composed of slide past one another easily when moving slowly, but jam against each other when forced to move quickly. Self-sculpting smart sand could assemble itself into solid replicas of objects. Research currently underway at MIT’s Distributed Robotic Laboratory (DRL) could lead to an innovative replicative manufacturing technique with the disruptive potential equal to that of 3D printing. 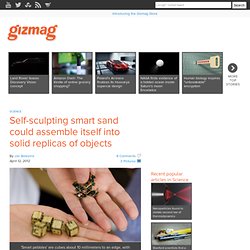 Polyurethane composite could replace steel or aluminum in some applications. The diesel engine housing, made using the new composite material A consortium of German research groups has created a new sandwich-type material that they claim offers strength similar to that of steel or aluminum, yet is significantly lighter and less expensive. It consists of a honeycomb-structured paper core, with glass fiber-reinforced layers of polyurethane on the outsides. Tomorrow's carbon fiber could be made from plastic bags. Some of the carbon fiber shapes, created out of polyethylene using Oak Ridge's new technique Thanks to research currently being conducted at the U.S. Department of Energy's Oak Ridge National Laboratory, our unwanted plastic bags may one day be recycled into carbon fiber.

Not only that, but the properties of the fibers themselves could be fine-tuned, allowing different types of carbon fiber to be created for specific applications. The Oak Ridge team, led by materials scientist Amit Naskar, start with polyethylene-base fibers – these could conceivably come from waste plastic sources, such as shopping bags and carpet backing scraps. Piezolelectric graphene could have wide-reaching applications. Lithium atoms (red) deposited on graphene were shown to give the material piezoelectric qualities Scientists have succeeded in endowing graphene with yet another useful property. Already, it is the thinnest, strongest and stiffest material ever measured, while also proving to be an excellent conductor of heat and electricity. These qualities have allowed it to find use in everything from transistors to supercapacitors to anti-corrosion coatings.

Superhydrophobic Technology repels liquid off your shoes. Shocking Pink: An Inexpensive Test for Chemical Weapon Attacks. It seems unlikely that the maker of hundred-million-dollar Hollywood blockbusters such as Armageddon and The Transformers could inspire scientists to develop an ultralow-cost tool for quickly sensing airborne chemical weapons. Yet one former University of Michigan at Ann Arbor (U.M.) researcher says his idea to use a nerve-gas antidote to create an inexpensive litmus paper–like nerve-gas sensor emerged shortly after watching The Rock on DVD a few years ago. During the climax of that 1996 Michael Bay movie, chemical weapons specialist Stanley Goodspeed (played by Nicholas Cage) injects himself in the heart with atropine to prevent certain death from VX gas.

Innovative Concrete Shows Secret Patterns When Wet, Hot. Just like ordinary concrete surfaces, it looks a tad dull and drag when dry … but put it in a place with condensation-producing heat, running water or natural rain and it reveals hidden decorative designs (that disappear again as it dries). Conceived by Frederik Molenschot and Susanne Happle, it is a bit like the old bathroom mirror trick – the writing, picture or pattern appears and disappears with moisture content.

On a humid day you might get partial glimpses of what would be fully visible during a torrential downpour. Floral patterns and falling leaves conjure images of sidewalks and steps where organic matter fell before the poured concrete fully dried, but the possibilities beyond that are endless as well – spirals of words in your bathroom sink, interactive decor in public places, steamy subliminal messages in urban night clubs or remote saunas. Aerogel: See-Through, Strong as Steel & Ligher than Air. Changing the texture of plastics on demand. The process can dynamically switch the texture of plastics between patterns ranging from dots, segments, lines to circles Image Gallery (3 images) Flat polymer sheets bend themselves into 3D shapes - just add water. Using a photolithography process, scientists have created flat polymer sheets that bend themselves into three-dimensional shapes when exposed to water When the petal of a flower is being formed, its shape is achieved by cells in one area expanding more than cells in an adjacent area.

The study is to be published online in Nature Communications on March 6, 2012. In a serious aging society with a declining birthrate, electronics are increasing their importance in the health and medical area as more IT devices are being introduced. Upon this background, an expectation is getting higher on an organic transistor, which is a soft electronic switch. Eight awesome things to come out of a 3D printer. Paper alloy could replace plastic in laptops, gadgets. Hydrogen Takes A New Form. No assembly required for Cubify 3D printer. 3D Systems' Cubify 3D printer is ready to work right out of the box Image Gallery (14 images) Have your bottle and eat it too – edible containers could be on the way. The Onion - America's Finest News Source. Man Shoots Himself Point-Blank To Test Bulletproof Vest. Pounding Pavement In Search Of A Smoother Drive.