Gmail. News: Two CoAD Faculty Members Win National Design Awards. No profit left behind - Stephanie Simon - POLITICO. Steven Moore, a vice chancellor at Texas A&M University, said the contract was not put out for competitive bid because administrators believed no other company could match the expertise that Pearson had gleaned working for NAU. 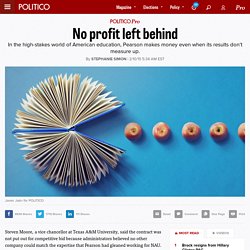 Pearson’s NAU program at the time was barely underway; there was no way to gauge its academic impact or its appeal to students. (Just two dozen would enroll that fall.) Nonetheless, officials at Texas A&M-Commerce and South Texas College were so confident their partnership with Pearson would be a success that they agreed to pay the company for at least 40,200 student enrollments by 2018. Pearson collects a fee for each enrollment; all told, the company stands to earn $9.4 million. Story Continued Below In the first year, the colleges got just 463 enrollments, far short of the 840 projected in the contract. And if enrollments fall short despite the marketing? A Future Segregated by Science? Let me say up front: I’m not a science guy. 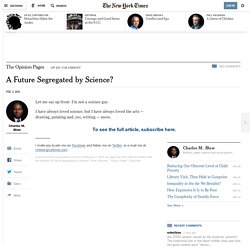 I have always loved science, but I have always loved the arts — drawing, painting and, yes, writing — more. My deepest foray into science came in high school when I won my way to the international science fair. Female Digital Media Entrepreneurs ‘Crack the Code’ at Ford Foundation Event. Journalists, entrepreneurs, “intrapreneurs,” funders, storytellers, academics and change agents gathered from locations across the globe at the Ford Foundation this past Thursday and Friday, ready to collaborate. 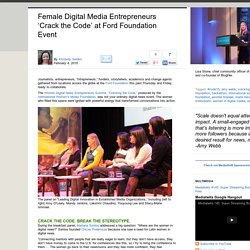 The Women Digital News Entrepreneurs Summit, “Cracking the Code,” produced by the International Women’s Media Foundation, was not your ordinary digital news event. The women who filled this space were ignited with powerful energy that transformed conversations into action. NJBIZ presents the Best 50 Women in Business for 2015. This year, NJBIZ is celebrating the 10-year anniversary of its Best 50 Women in Business awards. 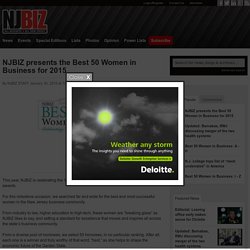 For this milestone occasion, we searched far and wide for the best and most successful women in the New Jersey business community. From industry to law, higher education to high-tech, these women are “breaking glass” as NJBIZ likes to say, and setting a standard for excellence that moves and inspires all across the state’s business community. TV’s New Girls’ Club. There is a moment in HBO’s “Doll & Em” when Em, a movie star, leaves her trailer to rehearse her lines alone. 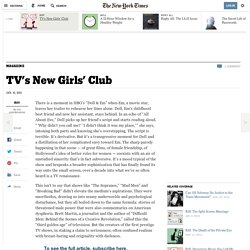 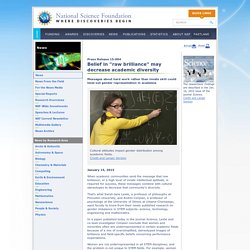 Disciplines That Expect ‘Brilliance’ Tend to Punish Women, Study Finds - Research. By Madeline Will Here’s a downside to our cultural obsession with genius: It might be a reason for the gender gap in certain academic fields. 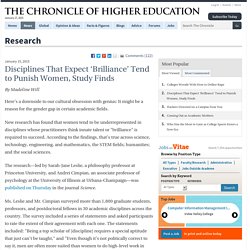 New research has found that women tend to be underrepresented in disciplines whose practitioners think innate talent or "brilliance" is required to succeed. According to the findings, that’s true across science, technology, engineering, and mathematics, the STEM fields; humanities; and the social sciences. The research—led by Sarah-Jane Leslie, a philosophy professor at Princeton University, and Andrei Cimpian, an associate professor of psychology at the University of Illinois at Urbana-Champaign—was published on Thursday in the journal Science. EDF Climate Corps Home. Centennial Contest. The AAUP Foundation’s Centennial Committee is holding a student contest to raise awareness about academic freedom and the AAUP. 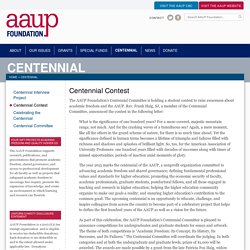 Rev. Frank Haig, SJ, a member of the Centennial Committee, announced the contest in the following letter: What is the significance of one hundred years? For a snow-covered, majestic mountain range, not much. And for the crashing waves of a tumultuous sea? —Rev. The centennial contest is open to all students enrolled at accredited institutions of higher education in the United States. MIT Professor’s Blog Comment Sets Off Debate Over Nerds and Male Privilege.

A deeply personal posting by an MIT professor and self-described “nerdy male” wrestling with the idea of male privilege has set off a debate about feminism, nerds, and privilege across the Internet. 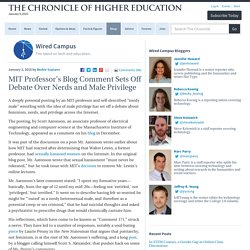 The posting, by Scott Aaronson, an associate professor of electrical engineering and computer science at the Massachusetts Institute of Technology, appeared as a comment on his blog in December. It was part of the discussion on a post Mr. Aaronson wrote earlier about how MIT had reacted after determining that Walter Lewin, a former professor, had sexually harassed women on the Internet. In the original blog post, Mr. In STEM Courses, a Gender Gap in Online Class Discussions. Women and men behave differently in online class discussions, at least in science, engineering, and computer-science courses, according to a new study conducted by Piazza Technologies, a company that makes a digital class-participation tool. 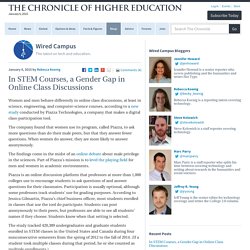 The company found that women use its program, called Piazza, to ask more questions than do their male peers, but that they answer fewer questions. When women do answer, they are more likely to answer anonymously. The findings come in the midst of an online debate about male privilege in the sciences. Part of Piazza’s mission is to level the playing field for men and women in academic environments. Piazza is an online discussion platform that professors at more than 1,000 colleges use to encourage students to ask questions of and answer questions for their classmates.

The study found that, on average, women in computer-science classes asked 2.20 questions and men asked 1.75. Phyllis Schlafly: Campus sex assault is on the rise because too many women go to college. Conservative icon Phyllis Schlafly is worried that college campuses are populated by too many women, a phenomenon she insinuated has contributed to increased sexual assault on campus. In a Monday column for the far-right website World Net Daily, the longtime anti-feminist crusader lamented the declining portion of university enrollments accounted for by men.

Schlafly — BA and JD, Washington University in St. Louis; MA, Radcliffe College — argued that it may even be time to implement quotas to ensure that men constitute at least half of a college’s enrollment. “Long ago when I went to college, campuses were about 70 percent male, and until 1970 it was still nearly 60 percent,” Schlafly wrote. “Today, however, the male percentage has fallen to the low 40s on most campuses.” Never one to shirk victim-blaming, Schlafly proceeded to link the problem of campus sexual assault to the increased enrollment of women in postsecondary institutions. Virtual Reality Applications Center. REU 2015 Program Website – Program Dates: May 26 – July 31, 2015Application Deadline: February 15, 2015 – Applications are now open. After completion of the online application please send the following items to Amy Carver, Program Coordinator, at acarver@iastate.eduResume/CVCopy of official transcriptsLetters of recommendation should be sent directly from your references.Notifications of acceptance begins March 3, 2015Declined applicants notified by April 17, 2015Eligibility: Applicants must be a U.S. citizen or permanent resident of the United States.Be and remain an undergraduate student in good standing.Plan to complete an undergraduate degree program on or after December 2015.Students selected to participate in the program will receive housing, a meal plan and a stipend of $5000 for the summer.

The program will also contribute towards their travel. Summer Program for Interdisciplinary Research and Education. Iris Van Herpen and 'a Different Way of Thinking' Adviser Guides Obama Into the Google Age. Photo WASHINGTON — ’s top technology adviser cringes when she hears highly educated adults say how bad they are at science and math, particularly when they do so in front of children. “That has to change,” the adviser, Megan J. Smith, firmly told a group of teachers at the White House not long ago.

Gender bias in student evaluations: Professors of online courses who present as male get better marks. Many in academia have long known about how the practice of student evaluations of professors is inherently biased against female professors. Students, after all, are just as likely as the public in general to have the same ugly, if unconscious, biases about women in authority. Just as polling data continues to show that a majority of Americans think being a man automatically makes you better in the boss department, many professors worry that students just automatically rate male professors as smarter, more authoritative, and more awesome overall just because they are men.

Now, a new study out North Carolina State University shows that there is good reason for that concern. One of the problems with simply assuming that sexism drives the tendency of students to giving higher ratings to men than women is that students are evaluating professors as a whole, making it hard to separate the impact of gender from other factors, like teaching style and coursework.

Learning to Love Criticism. Photo A NEW study by the linguist and tech entrepreneur Kieran Snyder, done for Fortune.com, found two differences between workplace performance reviews given to men and women. Across 248 reviews from 28 companies, managers, whether male or female, gave female employees more negative feedback than they gave male employees. Second, 76 percent of the negative feedback given to women included some kind of personality criticism, such as comments that the woman was “abrasive,” “judgmental” or “strident.” Only 2 percent of men’s critical reviews included negative personality comments. Ellevate – a global professional women's network. News: Humanities Professor Elected to IEEE Administrative Committee. News: NJIT's Daphne Soares Receives Women of Discovery Award. Alumni-Achievement-Nomination-form-2015.pdf. In Search of an Academic Wife. Image: Barbara Billingsley and Hugh Beaumont as the Cleavers in Leave It to Beaver Wanted: One academic wife. Amelia Earhart Fellowship.

Today, women remain a distinct minority in science and engineering, representing approximately 10 percent of professionals in these fields. We should not view women’s issues in isolation: Thoraya Obaid. Thoraya Obaid, one of the 30 women appointed to the Shoura Council, makes a point during her interview with Saudi Gazette. — SG photo by Amer Hilabi. ‘The Innovators’ by Walter Isaacson: How Women Shaped Technology. Photo. Ginni Rometty - Most Powerful Women 2014.

News: NJIT Committee on Women's Leadership Recognizes Interim Dean of NCE. News: NJIT Professor Speaks at International Gender Summit. David Thielen: Bringing More Women Into Computer Science. It's no secret women students are woefully underrepresented in computer science. There's a fun event coming up doing its part to help change that -- the Windward Code War. University of Wisconsin Computer Science Professor Joline Morrison said, "We really appreciated that the competition emphasized strategy and problem solving rather than simply coding. " The emphasis on strategy and problem solving has brought a much higher percentage of female participants to the Windward Code War. Boosting the Retention of Women in the STEM PipelineTools for Change. Top 10 Reasons Diversity Is Good For The Boardroom. Empowering Girls to Build the Future - Video. A Viral Video Encourages Girls to Become Engineers.