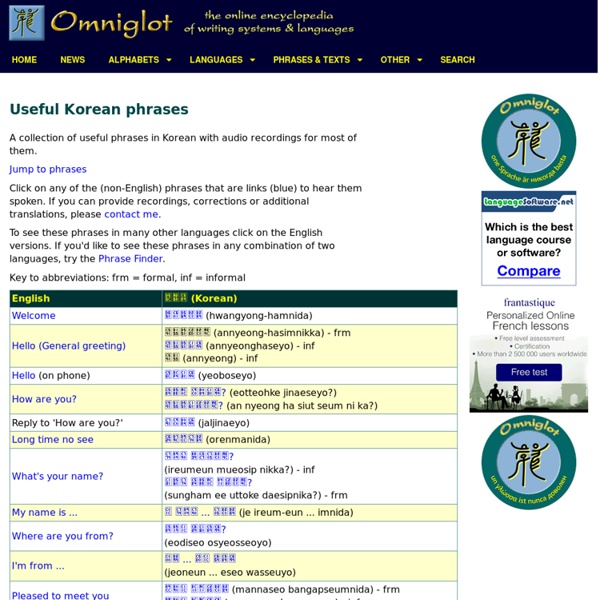 A collection of useful phrases in Korean with audio recordings for most of them. Jump to phrases Click on any of the (non-English) phrases that are links (blue) to hear them spoken. To see these phrases in many other languages click on the English versions. Key to abbreviations: frm = formal, inf = informal Learn to speak Korean confidently and naturally with Rocket Korean Learn Korean with Glossika Korean alphabet games If there is anything on this page that can be improved or corrected, please contact me. Support this site by making a donation:

Korean alphabet, pronunciation and language Korean is spoken by about 63 million people in South Korea, North Korea, China, Japan, Uzbekistan, Kazakhstan and Russia. The relationship between Korean and other languages is not known for sure, though some linguists believe it to be a member of the Altaic family of languages. Grammatically Korean is very similar to Japanese and about 70% of its vocabulary comes from Chinese. Origins of writing in Korea Chinese writing has been known in Korea for over 2,000 years. The Idu system used a combination of Chinese characters together with special symbols to indicate Korean verb endings and other grammatical markers, and was used to in official and private documents for many centuries. The Koreans borrowed a huge number of Chinese words, gave Korean readings and/or meanings to some of the Chinese characters and also invented about 150 new characters, most of which are rare or used mainly for personal or place names. Notable features of Hangeul The Hangeul alphabet (한글) Consonants (자음/子音) Download

Learn the Korean Alphabet - The Live in Asia Blog |The Live in Asia Blog The Korean alphabet has 14 consonants, 10 vowels, and 11 diphthongs (sounds created by combining two vowels, such as the “oi” in “boil”). Use the charts and videos below to master the sounds of the Korean alphabet. Or, Click Here to check out the Web’s Hottest premium Korean language program. Over 800,000 people have used this breakthrough system to master a second language–quickly and easily. Update: Right now they are offering their special “Korean Survival Kit” (a $79 product) for free!. What’s the big deal with Rocket Chinese? 800,000 satisfied customers! Sign up for your free, no-obligation 6 Day Trial and see how well Rocket Korean works for you! YES! This is a private and fully protected mailing list. After signing up you will be redirected to Rocket Languages to learn more about how Rocket Korean can work for you!! Over the next 6 days you’ll be able to see just how well the Rocket Korean Premium course works for you! You’ll be amazed at how much Korean you know after just a few days!

Learning Korean: 3 Differences Between Korean and English Grammar - The Live in Asia Blog |The Live in Asia Blog Korea's The Wonder Girls Korean and English have very different grammar structures, which can make learning Korean challenging for native English speakers. How should you overcome this challenge? The best way is to tackle the problem head on, by directly comparing Korean and English sentence structures. This article will give a very brief review of basic grammar concepts and then discuss the three main grammatical differences between Korean and English. Quick and Easy Grammar Refresher To get the most out of this article, you must understand some basic grammatical concepts. For example, in the sentence, “Ryan wrote a letter.” Word Order: Korean vs. The order of the words in the sentence above is subject + verb + object. Laieon = Ryan (there is no “R” sound in Korean) pyeonji = letter sseoss-eoyo = write This is the most important part of Korean grammar to understand. Korean Subject and object Markers This is an easy comparison. Notice that he word “eun” follows the word “Laieon” (Ryan).