NASA Posts a Huge Library of Space Sounds, And You're Free To Use Them 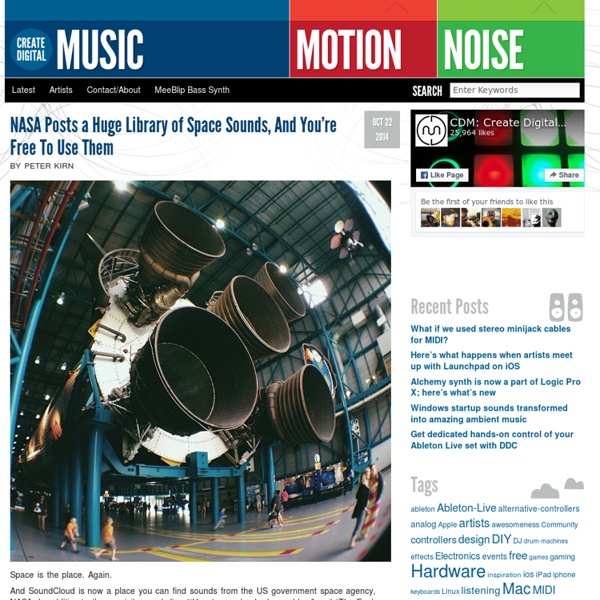 Space is the place. Again. And SoundCloud is now a place you can find sounds from the US government space agency, NASA. In addition to the requisite vocal clips (“Houston, we’ve had a problem” and “The Eagle has landed”), you get a lot more. There are rocket sounds, the chirps of satellites and equipment, lightning on Jupiter, interstellar plasma and radio emissions. And in one nod to humanity, and not just American humanity, there’s the Soviet satellite Sputnik (among many projects that are international in nature). Many of these sounds were available before; I’ve actually used a number of them in my own music. Another thing: you’re free to use all of these sounds as you wish, because NASA’s own audio isn’t copyrighted. Let the space remixing begin. European Space Agency, your move. Update: ESA has started posting downloadable sounds on SoundCloud! Have you made music with space sounds? More Sounds Want more? It’s slower to browse, but there’s an even bigger library on Archive.org. Comments

Eerie Sounds of Saturn's Radio Emissions Eerie Sounds of Saturn's Radio Emissions + Play sound of Saturn's radio emissions, which have changing frequencies Saturn is a source of intense radio emissions, which have been monitored by the Cassini spacecraft. The radio waves are closely related to the auroras near the poles of the planet. These auroras are similar to Earth's northern and southern lights. This is an audio file of radio emissions from Saturn. Visualizing Our Tech Worship With Giant Webs of Circuitry Technological mandala 20 - Resonator, 2014. Leonardo Ulian <div class="slide" data-slide-id="1579293" ><img title="" alt="" width="650px" src=" data-image-width="1200" data-image-height="900" /><p class="caption">Technological mandala 20 - Resonator, 2014.<span class="credit"><img class="photo" width="650px" src=" Leonardo Ulian </span></p><div class="desc"><div class="slide-counter"></div><div>Technological mandala 20 - Resonator, 2014. For Italian artist Leonardo Ulian, this is our universe.

Inspire Her Mind Science There’s a young 4-year old girl shuffling through a chest full of various dress-up clothes. The copy asks: Does dress-up determine her future? Enceladus In 2005, the Cassini spacecraft started multiple close flybys of Enceladus, revealing its surface and environment in greater detail. In particular, Cassini discovered a water-rich plume venting from the south polar region of Enceladus.[16] Cryovolcanoes near the south pole shoot geyser-like jets of water vapor, other volatiles, and solid material, including sodium chloride crystals and ice particles, into space, totaling approximately 200 kilograms (440 lb) per second.[15][17][18] Over 100 geysers have been identified.[19] Some of the water vapor falls back as "snow"; the rest escapes, and supplies most of the material making up Saturn's E ring.[20][21] According to NASA scientists, the plumes at Enceladus seem similar in chemical makeup to comets.[22] In 2014, NASA reported that Cassini found evidence for a large south polar subsurface ocean of liquid water within Enceladus with a thickness of around 10 km.[23][24][25] Discovery and naming[edit] Orbit[edit] Physical characteristics[edit]

Dances With Google Glass  In June 2013, Google launched a competition on Twitter soliciting bids from people interested in beta-testing its latest foray into wearable high tech. Since 'beta-tester' conjures up visions of bearded geeks in hoodies glued to their Retina displays, some marketing genius at Google coined the term 'Google Glass Explorers' and put a snapshot of a dusky model with pouty lips, a tousled mane, and a sleek band of titanium on her forehead, on the home page of Glass. (Photo: Reuters) The world was invited to pitch its ideas to Google, appended to the hashtag #IfIHadGlass. The winners would have to pony up $1,500 for the privilege of membership in a highly exclusive club of early adopters, but were expected to drive everyone else mad with envy. A year later, several thousand Google Glass Explorers find themselves roaming the earth, muttering "OK, Glass" and tapping their temples vigorously.

WorldWide Telescope - Microsoft Research Q. What is WorldWide Telescope? A. The WorldWide Telescope is a rich visualization environment that functions as a virtual telescope, bringing together imagery from the best ground- and space-based telescopes to enable seamless, guided explorations of the universe. WorldWide Telescope, created with Microsoft’s high-performance Visual Experience Engine, enables seamless panning and zooming across the night sky blending terabytes of images, data and stories from multiple sources over the Internet into a media-rich, immersive experience. 'Double star' moment for Jupiter and Venus in the night sky Tuesday night, Jupiter and Venus will culminate a month-long dance with what astronomers say will be a dazzling display, appearing just a fraction of a degree apart from one another in the night sky -- a show that some astronomers say could account for the "Star of Bethlehem" mentioned in the Bible. "To the eye they'll look like a double star," Sky & Telescope editor Kelly Beatty said on the magazine's website. To see the lineup, look to the west-northwest shortly after sunset.

E-Traces: Ballet Slippers That Make Drawings From The Dancer’s Movements If you’re like me, then you may have been accused of dispensing some questionable moves in the vicinity of the dance floor. I’ve always maintained that my critics simply couldn’t grasp the subtlety of my particular style of physical expression, and now I just may have a means of illustrating my point with an ingenious piece of wearable electronics by designer Lesia Trubat González called E-Traces. The concept of Electronic Traces is based on capturing dance movements and transforming them into visual sensations through the use of new technologies. To do this we focused on the ballet shoes themselves, which through the contact with the ground, and thanks to Lilypad Arduino technology, record the pressure and movement of the dancer’s feet and send a signal to an electronic device. A special application will then allow us to show this data graphically and even customize it to suit each user, through the different functions of this app. [via Prosthetic Knowledge]