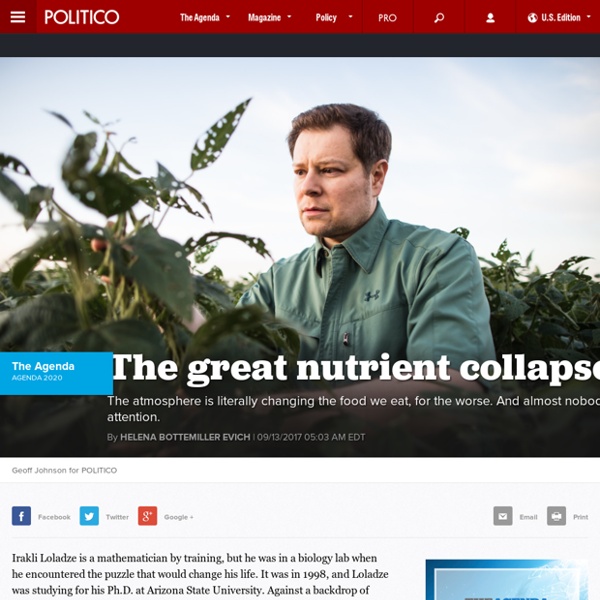 Irakli Loladze is a mathematician by training, but he was in a biology lab when he encountered the puzzle that would change his life. It was in 1998, and Loladze was studying for his Ph.D. at Arizona State University. Against a backdrop of glass containers glowing with bright green algae, a biologist told Loladze and a half-dozen other graduate students that scientists had discovered something mysterious about zooplankton. Zooplankton are microscopic animals that float in the world’s oceans and lakes, and for food they rely on algae, which are essentially tiny plants. Scientists found that they could make algae grow faster by shining more light onto them—increasing the food supply for the zooplankton, which should have flourished. But it didn’t work out that way. Loladze was technically in the math department, but he loved biology and couldn’t stop thinking about this. Loladze used his math training to help measure and explain the algae-zooplankton dynamic.

A Coral Reef Revival - The Atlantic - The Atlantic David Vaughan works on the Florida Reef Tract, the third largest coral reef in the world and a vastly important ecosystem for sustaining underwater life. He and a team of scientists are working to combat the crisis in the world’s coral reefs—that is, that human beings have lost 25 to 40 percent of the world’s corals in recent decades due largely to seawater temperature rise and continued acidification of the ocean. Vaughan has developed a technique called “microfragmenting” that allows corals to grow more than 25 times faster than normal, which could rapidly restore the dwindling population of healthy coral reefs. The Atlantic went inside the Mote Tropical Research Laboratory in Summerland Key, Florida, where Vaughan is the executive director, to uncover how the process works and understand how much hope there is to reverse the damage caused by humans.

This Tiny Country Feeds the World By Frank Viviano Photographs by Luca Locatelli This story appears in the September 2017 issue of National Geographic magazine. In a potato field near the Netherlands’ border with Belgium, Dutch farmer Jacob van den Borne is seated in the cabin of an immense harvester before an instrument panel worthy of the starship Enterprise. From his perch 10 feet above the ground, he’s monitoring two drones—a driverless tractor roaming the fields and a quadcopter in the air—that provide detailed readings on soil chemistry, water content, nutrients, and growth, measuring the progress of every plant down to the individual potato. Van den Borne’s production numbers testify to the power of this “precision farming,” as it’s known.

Warning of 'ecological Armageddon' after dramatic plunge in insect numbers The abundance of flying insects has plunged by three-quarters over the past 25 years, according to a new study that has shocked scientists. Insects are an integral part of life on Earth as both pollinators and prey for other wildlife and it was known that some species such as butterflies were declining. But the newly revealed scale of the losses to all insects has prompted warnings that the world is “on course for ecological Armageddon”, with profound impacts on human society. The new data was gathered in nature reserves across Germany but has implications for all landscapes dominated by agriculture, the researchers said. This Bioengineered Yeast Can Turn Astronaut Urine Into Food and Plastic - Seeker A tiny organism has big potential to produce both life-sustaining food and construction materials for astronauts on their long journey to Mars. Yeast strains of Yarrowia lipolytica that naturally like to feed on urine have been bioengineered to produce omega-3 fatty acids, which are essential to human health, as well as polyesters that can be made into moldable shapes. Generating tools and products from waste compounds is more efficient for a space mission than stockpiling food and supplies, which take up precious cargo room and require extra fuel to escape Earth’s gravity. But the innovation could also serve people on Earth in places where resources are limited, said Mark Blenner, an assistant professor of chemical and biomolecular engineering at Clemson University. “In poorer countries, we think this might be an interesting way to reduce waste production,” Blenner told Seeker. “Space is the ultimate resource-poor environment,” Blenner remarked.

Climate Change Is Forcing Trees to Move Northwest - The Atlantic As the consequences of climate change strike across the United States, ecologists have a guiding principle about how they think plants will respond. Cold-adapted plants will survive if they move “up”—that is, as they move further north (away from the tropics) and higher in elevation (away from the warm ground). A new survey of how tree populations have shifted over the past three decades finds that this effect is already in action. Farming fish in a tiny percentage of the oceans could feed the world With a growing population, the world is looking more and more to the ocean as a source of food. But wild stocks of fish and other seafoods are being overexploited in many areas. Now, a study from UCLA suggests that if fish farming can be moved offshore, then an area of sea the size of Lake Michigan (0.025 percent of the ocean's surface), could meet the global demand for fish and allow wild stock to recover.

Sea Turtles Under Threat as Climate Change Turns Most Babies Female In Brief Since sea turtle sex is influenced by the temperature at which the egg is incubated, climate change is ensuring that nearly all sea turtles in warm northern Australia are being born female. Engendered Species Using a new, non-invasive hormone test, the researchers from the U.S. National Oceanic and Atmospheric Administration (NOAA) Fisheries Department and the Queensland Department of Environment and Heritage Protection found that while 65 -69 percent of the turtles from the southern region were female, between 86.8 and 99.8 of turtles tested in the northern region were female, depending on age.

Growing food from mattresses: what experts can learn from working in refugee camps I am a scientist who has spent his career working with industry at the interface of science, engineering and medicine. I have served on many advisory boards on translating research into practice. But I never feel the flames of knowledge exchange burn as bright as when I’m at Za’atari refugee camp, in Jordan. Half the Coral in the Great Barrier Reef Has Died Since 2016 Once upon a time, there was a city so dazzling and kaleidoscopic, so braided and water-rimmed, that it was often compared to single living body. It clustered around a glimmering emerald spine, which astronauts could glimpse from orbit. It hid warm nooks and crannies, each a nursery for new life. It opened into radiant, iris-colored avenues, which tourists crossed oceans to see.

Meet the New Meat: PredicTED by OZY An editorial collaboration that celebrates the biggest ideas in our world. Join us every week for new stories and mind-bending video. Video by Tom Gorman As the world’s population barrels further into the billions, the need to feed all those hungry mouths will reach epic proportions as well. The Great Barrier Reef: a catastrophe laid bare It was the smell that really got to diver Richard Vevers. The smell of death on the reef. “I can’t even tell you how bad I smelt after the dive – the smell of millions of rotting animals.” Vevers is a former advertising executive and is now the chief executive of the Ocean Agency, a not-for-profit company he founded to raise awareness of environmental problems. After diving for 30 years in his spare time, he was compelled to combine his work and hobby when he was struck by the calamities faced by oceans around the world.

Graphene-based water filter produces drinkable water in just one step Scientists at Australian research centre CSIRO have used graphene to create a simple filtration system that could change the lives of millions in the developing world by making the process of purifying water faster and more effective. The team at the Commonwealth Scientific and Industrial Research Organisation (CSIRO) in Sydney developed the system as an alternative to existing processes that they described as being time-consuming, expensive and unable to cope with common contaminants such as oil and detergents. "Conventional water-filter membranes used in water purification are made from polymers and cannot handle a diverse mix of contaminants," said the scientists. "They clog or allow contaminants to pass through, so they have to be separated out before the water is filtered. This technology can create clean drinking water, regardless of how dirty it is, in a single step."

what_an_invasive_species_in_nepal_tells_us_about_our_climate_future © 2009 Jeevan Jose/Wikimedia Commons Nepal’s Chitwan National Park, a stretch of grasslands, forests, and wetlands in the humid foothills of the Himalayas, is home to an enormous diversity of plants and animals. A UNESCO World Heritage Site, the park provides refuge to Bengal tigers and some of the last of the world’s single-horned Asiatic rhinoceroses, among other endangered species. Most people in the region scrape out a living through smallholder farming, almost fully dependent on the environment and its resources for their livelihoods. As that environment changes—because of land degradation, shifts in the monsoon, and groundwater depletion—their lives and livelihoods become more precarious.