Michelle Kraus: The Great American Credit Catastrophe Is Our Generation's 911. The 9/11 of the middle class is the consumer credit debacle. 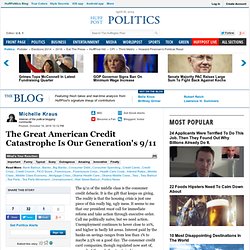 It is the gift that keeps on giving.

Hegel on Wall Street. Bailout. The Fix - TARP: How it's playing in the midterm campaigns. By Felicia Sonmez A new poll from the Pew Research Center/National Journal Congressional Connection indicates that the Troubled Asset Relief Program, which officially came to an end last Sunday, continues to be a major voting issue ahead of the November midterms. 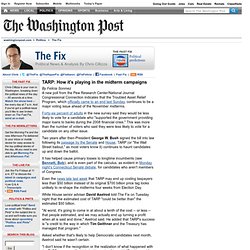 Forty-six percent of adults in the new survey said they would be less likely to vote for a candidate who "supported the government providing major loans to banks during the 2008 financial crisis. " This was more than the number of voters who said they were less likely to vote for a candidate on any other issue. Two years after then-President George W. Bush signed the bill into law following its passage by the Senate and House, TARP (or "the Wall Street bailout," as most voters know it) continues to haunt candidates up and down the ballot. White House senior adviser David Axelrod told The Fix on Tuesday night that the estimated cost of TARP "could be better than" the estimated $50 billion. Time for Another State Bailout? - Derek Thompson - Business. Local governments are cutting jobs faster than any time in 30 years, as you can see in the graph below. 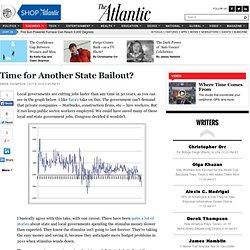 I like Ezra's take on this. The government can't demand that private companies -- Starbucks, construction firms, etc -- hire workers. But it can keep public sector workers employed. We could have saved many of these local and state government jobs. Congress decided it wouldn't. After 2 turbulent years, officials assess TARP. Treasury Secretary Timothy F. 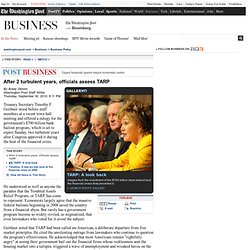 Geithner stood before staff members at a recent town hall meeting and offered a eulogy for the government's $700 billion bank bailout program, which is set to expire Sunday, two turbulent years after Congress approved it during the heat of the financial crisis. He understood as well as anyone the paradox that the Troubled Assets Relief Program, or TARP, has come to represent: Economists largely agree that the massive federal bailouts beginning in 2008 saved the country from a financial abyss. But rarely has a government program become so widely reviled, so stigmatized, that even lawmakers who voted for it avoid the subject.

Bailout. Bailout Nation. Geithner Debunks Five Greatest Myths About TARP. New Forecast Sees Drug-Sales Growth Overseas. The global drug market will grow 5 to 7 percent in 2011, to $880 billion, as higher spending in nations like China, Brazil and India makes up for slow growth and patent losses in the United States, according to a forecast released Wednesday by IMS Health, an industry data company. 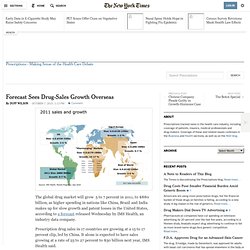 Prescription drug sales in 17 countries are growing at a 15 to 17 percent clip, led by China. It alone is expected to have sales growing at a rate of 25 to 27 percent to $50 billion next year, IMS Health said. “It’s driven by the level of economic development in these markets and the growing demand for access to medicines and a growing commitment by governments to help make those treatment options available to their citizens,” Murray Aitken, the IMS senior vice president in charge of the research, said in an interview Thursday.

The United States will remain the single largest pharmaceutical market, with 3 to 5 percent growth expected next year, IMS predicted. Mr. Employers Continue to Discriminate Against Jobless, Think 'The Best People Are Already Working' Stress Symptoms, Causes, Treatment - What are the effects of stress on medical and psychological conditions on MedicineNet. What do we know about using (activating) and overusing our internal systems that respond to stress? Animal and human research has taught us much about our internal stress systems. Check Your FICO Credit Score and Credit Report Online. Credit score (United States) A credit score in the United States is a number representing the creditworthiness of a person, the likelihood that person will pay his or her debts. 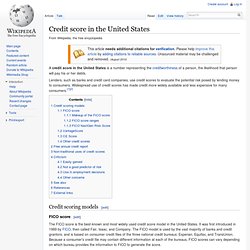 Lenders, such as banks and credit card companies, use credit scores to evaluate the potential risk posed by lending money to consumers. Widespread use of credit scores has made credit more widely available and less expensive for many consumers.[1][2] Credit scoring models[edit] FICO score[edit] The FICO score is the best-known and most widely used credit score model in the United States. Makeup of the FICO score[edit] The approximate makeup of the FICO score used by US lenders Credit scores are designed to measure the risk of default by taking into account various factors in a person's financial history. Getting a higher credit limit can help your credit score. Understanding Credit Scores: Credit Bureaus & FICO Score Calculation. Your credit score influences the credit that’s available to you and the terms (interest rate, etc.) that lenders offer you. 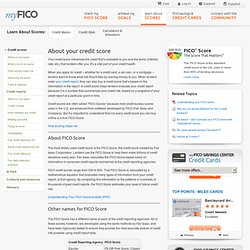 It’s a vital part of your credit health. When you apply for credit – whether for a credit card, a car loan, or a mortgage – lenders want to know what risk they'd take by loaning money to you. When lenders order your credit report, they can also buy a credit score that’s based on the information in the report. Mike Lux: Obama Comes Through on Foreclosure Issue: What's Next? When the notarization on foreclosures issue suddenly flared up over the last 24 hours, my heart sank. 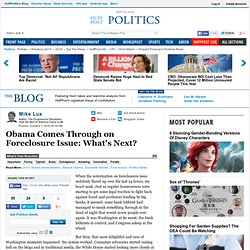 Just as regular homeowners were starting to get some legal traction to fight back against fraud and predatory lending by big banks, it seemed, some bank lobbyist had managed to sneak something through in the dead of night that would screw people over again. Mike Lux. Mike Lux (born May 13, 1960, Lincoln, Nebraska) is the co-founder and President of Progressive Strategies, L.L.C., a political consulting firm founded in 1999, focused on strategic political consulting for non-profits, labor unions, PACs and progressive donors. 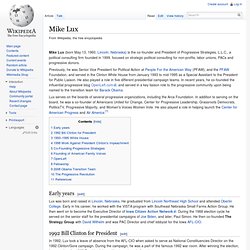 Previously, he was Senior Vice President for Political Action at People For the American Way (PFAW), and the PFAW Foundation, and served in the Clinton White House from January 1993 to mid-1995 as a Special Assistant to the President for Public Liaison. He also played a role in five different presidential campaign teams.

In recent years, he co-founded the influential progressive blog OpenLeft.com, and served in a key liaison role to the progressive community upon being named to the transition team for Barack Obama. Early years[edit] Lux was born and raised in Lincoln, Nebraska. 1992 Bill Clinton for President[edit] 1993–1995 White House[edit] Netroots. Netroots is a term coined in 2002 by Jerome Armstrong[1] to describe political activism organized through blogs and other online media, including wikis and social network services.

The word is a portmanteau of Internet and grassroots, reflecting the technological innovations that set netroots techniques apart from other forms of political participation. In the United States, the term is used mainly in left-leaning circles.[2] At times, the term netroots is used interchangeably with the term blogosphere, though the blogosphere is considered a subset of netroots in that blogosphere describes just the online community of blogs, where netroots includes that plus a number of larger liberal on-line outposts such as MoveOn, Media Matters for America and Think Progress.[1] Progressive Strategies. Michael Lux, CEO Mike Lux is the co-founder and CEO of Progressive Strategies, an innovative consulting firm that is guided by a mission of building the progressive movement through collaborative work between progressive organizations, issue campaigns and causes. 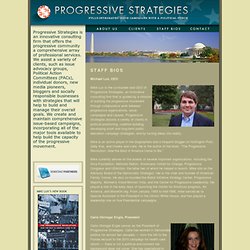 Progressive Strategies assists a variety of clients in political positioning, coalition building, developing short and long-term public education campaign strategies, and by turning ideas into reality. Robert Scheer: Hey Michelle, Read My Book. On Tuesday, I received yet another deceptively personal e-mail addressed to "Robert" from Michelle Obama asking me once again to contribute to the "amazing journey" toward "progress" that her husband has led. "Fool me once," I muttered, regretful of my previous contribution and even embarrassed to wear the artist-designed Obama for President T-shirt that I got in return. I was particularly annoyed by the first lady's assurance that "You're the reason we reined in Wall Street banks that were out of control," since I have written a book and numerous articles asserting just the opposite.

I envy her blind spousal loyalty -- my own mate is a bit less forgiving -- but how in the world can she, or the hacks that ginned out this e-mail to millions on her behalf, make such an assertion without sensing the absurd? Robert Scheer, Editor in Chief. Robert Scheer. Foreclosure Controversy Draws Cautious Response. Calif AG calls on all banks to halt foreclosures. California's attorney general wants all lenders to cease efforts to take back homes from borrowers in the state until the companies can prove that they are complying with a law aimed at preventing foreclosures. Jerry Brown said Friday all lenders should follow Bank of America Corp.' Bank Of America Stops Foreclosures In All 50 States. FDIC Ready To Sue Executives From Failed Banks.