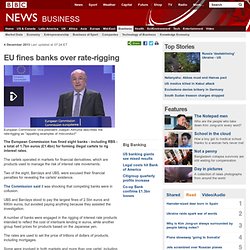 The cartels operated in markets for financial derivatives, which are products used to manage the risk of interest rate movements. Suppressed report: welfare reform link to homelessness and food bank use. Now you see it now you don't. 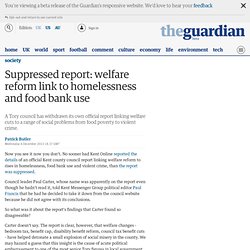 No sooner had Kent Online reported the details of an official Kent county council report linking welfare reform to rises in homelessness, food bank use and violent crime, than the report was suppressed. Council leader Paul Carter, whose name was apparently on the report even though he hadn't read it, told Kent Messenger Group political editor Paul Francis that he had he decided to take it down from the council website because he did not agree with its conclusions. So what was it about the report's findings that Carter found so disagreeable? Carter doesn't say. The report is clear, however, that welfare changes - bedroom tax, benefit cap, disability benefit reform, council tax benefit cuts - have helped detonate a small explosion of social misery in the county.

VAPORIZED: Detroit Obliterates Retirement Funds: 80% Cuts to Pensioners: ‘This Is Going to Affect Everyone’ ‘Though a decade ago civil servants and union members would never have believed it could happen, the stark reality of the situation came to pass this morning. 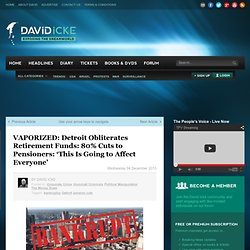 Transparency: Bitcoin. Jesse Ventura: Every baby born in US already $50,000 in debt — RT SophieCo. A man of many titles, Jesse Ventura is a politician, actor, author, US navy veteran and a former professional wrestler. 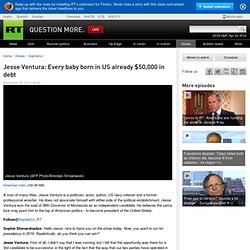 He does not associate himself with either side of the political establishment. Vietnamese banker sentenced to death for fraud. A Vietnamese former banker and his business associate have been sentenced to death for their part in the embezzlement of $25 million, state media has reported. The pair were among 11 defendants in the nine-day trial in Ho Chi Minh City, state media reported on Saturday, in a case that has highlighted Vietnam’s efforts to show it is stamping out corruption in the face of widespread public anger over the issue.

Vu Quoc Hao, 58, the one-time chief of a finance subsidiary of the state-owned Vietnam Agribank and building firm boss Dang Van Hai, 56, were sentenced to death on Friday, according to state television. Pentagon guilty of billion-dollar accounting fraud, reveals Reuters investigation. A new report from Reuters has discovered widespread accounting fraud at the Pentagon, describing a budget of more than $8 trillion disappearing into a mess of corrupted data, erroneous reports, and unauditable ledgers. 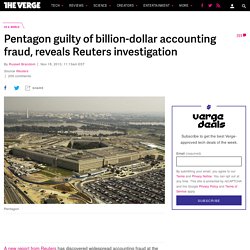 Sources from the Department of Finance and Accounting describe the arduous process of squaring the Navy's books with the US Treasury outlays, dealing with obviously inaccurate numbers or entries that were simply left blank. The data usually arrives just two days before deadline, and supervisors direct the office to enter false numbers — known as "plugs" — to square the accounts and conceal the agencies' patchy bookkeeping. The result is fraudulent figures that can reach as high as a trillion dollars in a single year, simply to make the Pentagon books match the Treasury's budget.

The army lost track of $5.8 billion in supplies between 2003 and 2011 In one example, the Army lost track of roughly $5.8 billion worth of supplies between 2003 and 2011. Karen Hudes (World Bank): "IRS collects your taxes and gives it to the Vatican" "Syria actors" Hungary Sheds Bankers’ Shackles. •International Monetary Fund told to vacate the country; nation now issuing debt-free money By Ronald L. 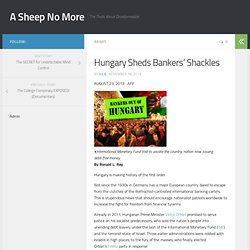 Ray Hungary is making history of the first order. Not since the 1930s in Germany has a major European country dared to escape from the clutches of the Rothschild-controlled international banking cartels. This is stupendous news that should encourage nationalist patriots worldwide to increase the fight for freedom from financial tyranny.

Bank chief quits as results released. KBC chief executive John Reynolds resigned on the same day as the bank announced it is significantly increasing bad loan provisions for the year. 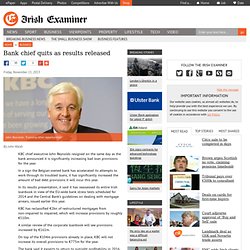 In a sign the Belgian-owned bank has accelerated its attempts to work through its troubled loans, it has significantly increased the amount of bad debt provisions it will incur this year. In its results presentation, it said it has reassessed its entire Irish loanbook in view of the EU-wide bank stress tests scheduled for 2014 and the Central Bank’s guidelines on dealing with mortgage arrears, issued earlier this year. KBC has reclassified €2bn of restructured mortgages from non-impaired to impaired, which will increase provisions by roughly €510m. A similar review of the corporate loanbook will see provisions increased by €161m. Kevin Annett (ITCCS.ORG): Pope Francis, Vatican join with China, Putin for world currency & power. ‘Paradigm shift’: Surging bitcoin to replace ‘broken’ government currencies — RT Business.