Federal Revenue: Where Does the Money Come From. Research desk responds: Tax rates galore! By Dylan Matthews theorajones1 asks: What has happened to tax rates on median income people since 1980? 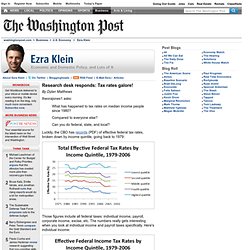 Compared to everyone else? Can you do federal, state, and local? Luckily, the CBO has records (PDF) of effective federal tax rates, broken down by income quintile, going back to 1979: Those figures include all federal taxes: individual income, payroll, corporate income, excise, etc. Everyone The U.S. Government Owes Money To, In One Graph : Planet Money. If Congress doesn't raise the debt ceiling soon, the U.S. government won't be able to pay its debts. 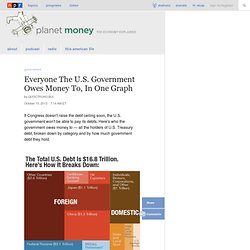 Here's who the government owes money to — all the holders of U.S. Treasury debt, broken down by category and by how much government debt they hold. Notes. History of the United States public debt. US federal debt held by the public as a percentage of GDP, from 1790 to 2013, projected to 2038. 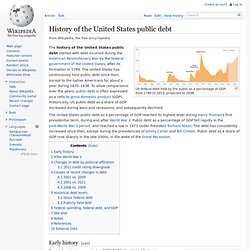 Historically, US public debt as a share of GDP increased during wars and recessions, and subsequently declined. The United States public debt as a percentage of GDP reached its highest level during Harry Truman's first presidential term, during and after World War II. Early history[edit] National Debt Graph by President. The best odds on the presidential election come from the betting markets and can be found here. 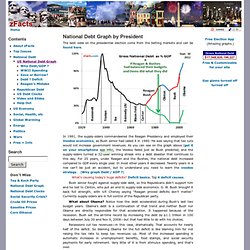 In 1981, the supply-siders commandeered the Reagan Presidency and employed their Voodoo economics, as Bush senior had called it in 1980. He was saying that tax cuts would not increase government revenues. As you can see on the graph above (get it on your smartphone app info), the Voodoo failed just as Bush predicted, and the supply-siders turned a 32-year winning streak into a debt disaster that continues to this day. Average America vs the One Percent. Obama, GOP Plans for Payroll Tax Holiday Could Unravel Social Security. Washington, D.C. — The payroll tax holiday recently unveiled by President Obama and Republican Congressional leaders could lead to the “unraveling of Social Security,” charged Eric Kingson, Co-Director of Social Security Works and an expert on Social Security. 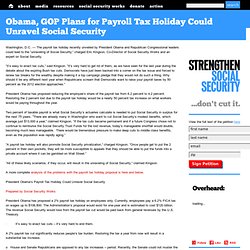 “It’s easy to enact tax cuts,” said Kingson. “It’s very hard to get rid of them, as we have seen for the last year during the debate about the expiring Bush tax cuts. Democrats have just been backed into a corner on the tax issue and forced to renew tax breaks for the wealthy despite making it a top campaign pledge that they would not do such a thing. Why should it be any different next year when Republicans scream that Democrats want to raise your payroll taxes by 50 percent as the 2012 election approaches.” President Obama has proposed reducing the employee’s share of the payroll tax from 6.2 percent to 4.2 percent. “A payroll tax holiday will also promote Social Security privatization,” charged Kingson. Report: Social Security To Run Out Of Funding BY 2035. 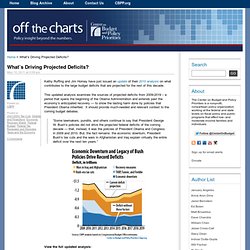 This updated analysis examines the sources of projected deficits from 2009-2019 – a period that spans the beginning of the Obama Administration and extends past the economy’s anticipated recovery — to show the lasting harm done by policies that President Obama inherited. It should provide much-needed and relevant context to the coming budget debates. “Some lawmakers, pundits, and others continue to say that President George W. Republican National Convention: The one graph you need to see before watching. 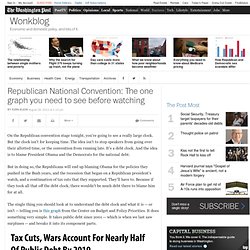 Obama spending binge never happened. By Rex Nutting, MarketWatch WASHINGTON (MarketWatch) — Of all the falsehoods told about President Barack Obama, the biggest whopper is the one about his reckless spending spree. 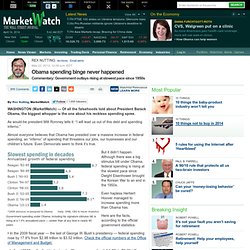 As would-be president Mitt Romney tells it: “I will lead us out of this debt and spending inferno.” Almost everyone believes that Obama has presided over a massive increase in federal spending, an “inferno” of spending that threatens our jobs, our businesses and our children’s future. Even Democrats seem to think it’s true. Government spending under Obama, including his signature stimulus bill, is rising at a 1.4% annualized pace — slower than at any time in nearly 60 years. But it didn’t happen. Even hapless Herbert Hoover managed to increase spending more than Obama has. Who Is The Smallest Government Spender Since Eisenhower? Would You Believe It's Barack Obama? Mind-Blowing Charts From the Senate's Income Inequality Hearing.

Capitalism And Its Discontents. By David Barsamian DAVID BARSAMIAN is founder and director of Alternative Radio, a weekly radio program based in Boulder, Colorado (www.alternativeradio.org). 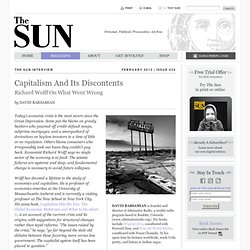 His books include Original Zinn, coauthored with Howard Zinn, and How the World Works, co­authored with Noam Chomsky. In his spare time he lectures worldwide, reads Urdu poetry, and listens to Indian ragas. www.alternativeradio.org Today’s economic crisis is the most severe since the Great Depression. Wolff has devoted a lifetime to the study of economics and capitalism. The son of European immigrants, Wolff was born in 1942 in Youngstown, Ohio, where his father worked for the Youngstown Sheet and Tube Company, a steel manufacturer.

Wolff’s analysis is proof that economics doesn’t have to be boring. I interviewed him in Santa Fe, New Mexico, in early September 2011 and broadcast our talk on Alternative Radio, my weekly radio program. Economic Scene - How the U.S. Surplus Became a Deficit.