Five Reasons the 1% Do Not Want Unemployment to Decrease. (Photo: Jobs With Justice)BuzzFlash at Truthout isn't breaking any new economic theory in stating that corporations and the 1% -- incuding the increasingly dominant Wall Street financial stranglehold on the economy -- are actually quite happy with permanently high (as long as it doesn't cause political de-stabilization) unemployment. 1) The most important value to high unemployment to the 1% is in the ever-increasing profit margin that comes from lowering the cost of labor by decreasing salaries and benefits. 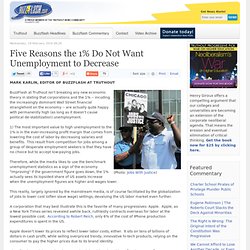 This result from competition for jobs among a group of desperate employment seekers is that they have no choice but to accept low-paying jobs. Therefore, while the media likes to use the benchmark unemployment statistics as a sign of the economy "improving" if the government figure goes down, the 1% actually sees its lopsided share of US assets increase when the unemployment figures are higher and wages lower. Apple doesn't lower its prices to reflect lower labor costs, either. The Conservative Case for a Minimum Wage Hike. Most conservatives disparage minimum-wage laws with straightforward economic reasoning, based on Econ 101 textbook theory: demand curves slope down. 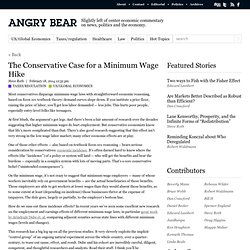 If you institute a price floor, raising the price of labor, you’ll get less labor demanded — less jobs. This hurts poor people, especially entry-level folks like teenagers. At first blush, the argument’s got legs. Job Creationism: The Myth of the Entrepreneur as God. (Photo: byronv2 / Flickr)The State of the Union Address from President Obama, and the reactions to it, were sadly predictable. 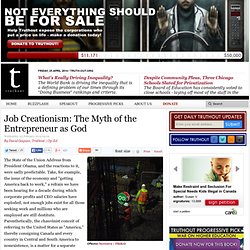 Take, for example, the issue of the economy and "getting America back to work," a refrain we have been hearing for a decade during which corporate profits and CEO salaries have exploded, not enough jobs exist for all those seeking work and millions who are employed are still destitute. Parenthetically, the chauvinist conceit of referring to the United States as "America," thereby consigning Canada and every country in Central and South America to nonexistence, is a matter for a separate article. New Fed Study On Jobs Crisis Is Extremely Misleading. People have been buzzing about a new study suggesting the U.S. job market is in better shape than we think. 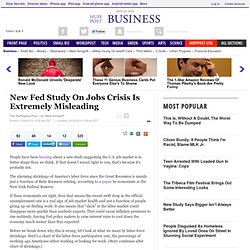 If that doesn't sound right to you, that's because it's probably not. Elizabeth Warren: "It Hurts... It Just Makes Me Madder Than Hell" (Photo: Edward Kimmel / Flickr)President Obama gave a terrific State of the Union speech last night. 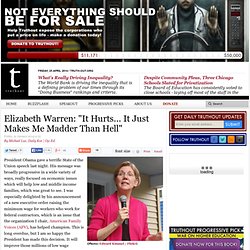 His message was broadly progressive in a wide variety of ways, really focused on economic issues which will help low and middle income families, which was great to see. I was especially delighted by his announcement of a new executive order raising the minimum wage for workers who work for federal contractors, which is an issue that the organization I chair, American Family Voices (AFV), has helped champion. This is long overdue, but I am so happy the President has made this decision. It will improve those millions of low wage workers’ lives, it will improve the way government operates, and it will boost the economy because those workers will have more spending money. 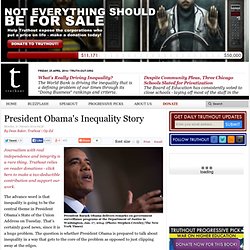 (Photo: Stephen Crowley/The New York Times)Journalism with real independence and integrity is a rare thing. Truthout relies on reader donations - click here to make a tax-deductible contribution and support our work. The advance word is that inequality is going to be the central theme in President Obama’s State of the Union Address on Tuesday. That’s certainly good news, since it is a huge problem. The question is whether President Obama is prepared to talk about inequality in a way that gets to the core of the problem as opposed to just clipping away at the edges. Paul Krugman is wrong; Obama DOES need to discuss Keynesian economics in his State of the Union address. Here’s why.

Paul Krugman is my hero. 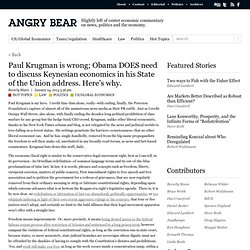 I credit him–him alone, really–with ending, finally, the Peterson Foundation’s capture of almost all of the mainstream news media as their PR outfit. Just as I credit Occupy Wall Street, also alone, with finally ending the decades-long political prohibition of class warfare by any group but the hedge fund/CEO crowd. Unemployment Falls to 6.7 Percent Due to Workers Leaving the Labor Force. The headline unemployment rate fell sharply to 6.7 percent in December. 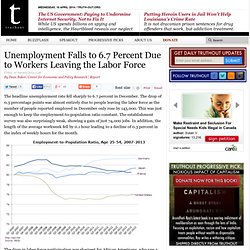 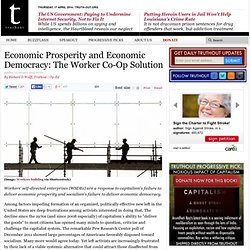 Among factors impeding formation of an organized, politically effective new left in the United States are deep frustrations among activists interested in doing that. Unemployment Falls to 6.7 Percent Due to Workers Leaving the Labor Force. The $17 Trillion Delusion: The Absurdity of Cutting Social Security to Reduce the Debt. (Photo: Pete Souza / White House)President Obama boasted last week that he had signed legislation to lift "the twin threats" to our economy of government shutdown and default. 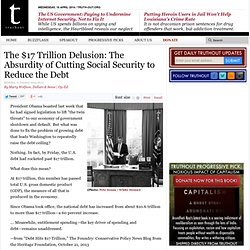 But what was done to fix the problem of growing debt that leads Washington to repeatedly raise the debt ceiling? Nothing. In fact, by Friday, the U.S. debt had rocketed past $17 trillion.What does this mean? At $17 trillion, this number has passed total U.S. gross domestic product (GDP), the measure of all that is produced in the economy.Since Obama took office, the national debt has increased from about $10.6 trillion to more than $17 trillion—a 60 percent increase.... Meanwhile, entitlement spending—the key driver of spending and debt—remains unaddressed. Seventeen trillion dollars certainly sounds like a big, scary number, especially when national debt clocks tell us that this translates into more than $53,000 for every person in the United States.