Scrapping the EMA and cutting the young adrift. This lost generation will cost us more than the cuts save. Graduates without a future are the new shock. 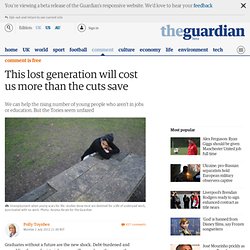 Debt-burdened and scrambling for any barista job, many will never have the career they were told a degree would bring. The knock-on effect down the food chain means those with degrees displace others for that prized job tipping out coffee grounds at the espresso machine. Other shocking news is that the number of 16-year-olds staying on in education has fallen for the first time in years, raising Neets – those not in education, employment or training – by 8%. At a time when leaving school without plans has never been a worse life choice, more teenagers are walking away to do nothing at all. Unemployment when young scars for life: studies show most are destined for a life of underpaid work, punctuated with no work.

Where should they be? But who is there to urge, entice and prod them into college? Teenagers at most risk of dropping out are those who most need to know about vocational courses away from a school they may find purgatory. Letters: Use the budget to save the EMA. We, the undersigned economists, support the Save EMA campaign and oppose the government's plans to abolish the education maintenance allowance, a scheme which helps and encourages students from poorer backgrounds in England, aged 16 to 19, to stay on in education (Hughes calls for £100m to help poorer students, 14 March). 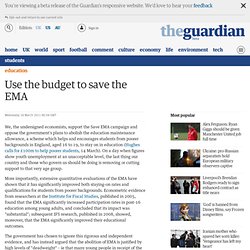 On a day when figures show youth unemployment at an unacceptable level, the last thing our country and those who govern us should be doing is removing or cutting support to that very age group. More importantly, extensive quantitative evaluations of the EMA have shown that it has significantly improved both staying-on rates and qualifications for students from poorer backgrounds. 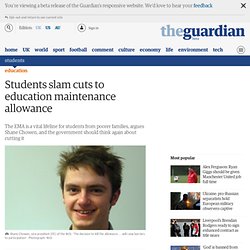 Anger because of the misrepresentation that plagues the government's policy on support for learners, frustration because many students believe they are taking the rap for a crisis we did not cause, and anxiety because the inevitable question on each EMA recipient's mind – that's 620,000 young people from the poorest households – is: "How am I going to be able to afford to study and progress without this assurance of weekly support? " The government's proposed alternative, the so-called enhanced learner support fund, is so impractical as to be almost laughable. This is essentially a topping-up of the money schools and colleges receive to distribute in discretionary hardship grants. This scheme is doomed from the start. Let's be very clear who we are talking about. High youth unemployment must be tackled, and fast.

The latest unemployment figures, due on Wednesday, will once again highlight the unacceptable levels of youth unemployment. 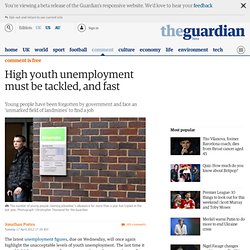 The last time it was this high was a quarter of a century ago, just as I was starting my first "proper" job (working on welfare policy at the Treasury). Since 1987, the UK labour market has changed hugely – mostly for the better. It is much more dynamic and flexible, yet at the same time the protections for workers (for example, the minimum wage and laws prohibiting unfair discrimination) against exploitation and abuse are stronger. 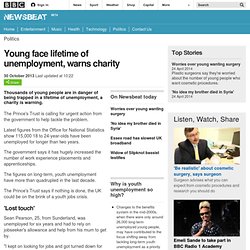 Unemployed young people feel they have 'nothing to live for' - News - Student. The findings showed that 40 per cent of young people have faced symptoms of mental illness, including self-loathing and panic attacks, as a result of being out of work. 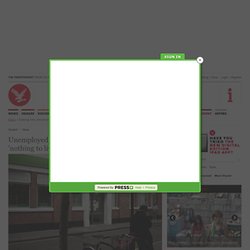 The survey also found that long-term unemployed young people across the UK are more than twice as likely as their peers to have been prescribed antidepressants. One in three (32 per cent) long-term unemployed youngsters have contemplated suicide and one in four (24 per cent) in this group admitted to self-harming, according to the charity's report.

Of those polled, 9 per cent said they have "nothing to live for" with those stuck in long-term unemployment feeling particularly pessimistic about their prospects in life (21 per cent). If applied to the whole population, this would equate to 750,000 people aged 16 to 25, according to the youth charity. Youth unemployment statistics - Commons Library Standard Note. UK unemployment rate drops to 7.1% 22 January 2014Last updated at 12:29 ET Ed Miliband clashes with David Cameron over the economy at Prime Minister's Questions. 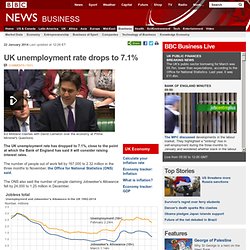 The UK unemployment rate has dropped to 7.1%, close to the point at which the Bank of England has said it will consider raising interest rates. The number of people out of work fell by 167,000 to 2.32 million in the three months to November, the Office for National Statistics (ONS) said. The ONS also said the number of people claiming Jobseeker's Allowance fell by 24,000 to 1.25 million in December. Continue reading the main story. Record levels of young adults living at home, says ONS. The number of young adults living with their parents has increased by a quarter since 1996, official figures show, with high house prices and growing youth unemployment forcing many to remain in the family home. 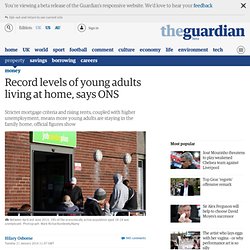 A total of 3.3 million 20- to 34-year-olds lived with their parents in 2013, according to the Office for National Statistics, the highest number since it started keeping records in 1996. Over that period the number of young adults sharing a home with their parents rose by 25%, despite the proportion of the population aged between 20 and 34 remaining broadly the same.

The ONS data showed that people were most likely to live with their parents in their early 20s, with 49% of 20- to 24-year-olds in the family home, compared to 21% of 25- to 29-year-olds, and 8% of 34-year-olds – and it is the percentage of the youngest age group that has increased most noticeably, rising from 42% in 2008. "The recession hit the young particularly hard, with a sharp rise in youth unemployment. Eurozone youth unemployment reaches record high of 24.4% The crisis facing the younger generation across the Eurozone worsened last month as youth unemployment hit a new record high of 24.4% with under-25s in Spain, Italy and Portugal finding it harder to get jobs. 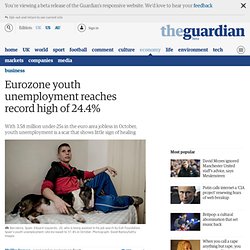 The grim news on on employment came as the Netherlands was stripped of its prized AAA credit rating despite the country's recent exit from a year-long recession. Ratings agency Standard & Poor's said on Friday that weakening growth prospects showed the country would struggle to improve its financial stability and generate new jobs. Build-it scheme allows young people to build themselves a future. Billy McVay takes a short break from chiselling plaster off the walls of what used to be an old meals-on-wheels kitchen, which he and seven more young people are helping to convert into a community centre in the centre of Brixton. 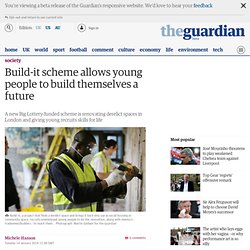 There are no sluggards or sulkers here – everyone, young and old, is working hard and enjoying it, getting rid of the plaster, clearing rubble, preparing for the next stage. This work has transformed Billy's life. "I was a young teenager growing up on an estate where it was so crazy – people coming wanting to fight us,"' he says. Unemployment Rate Falls To 7.1% In Job Surge. The UK unemployment rate fell to 7.1% during the three months to the end of November, prompting concerns of a rise in mortgage rates. It was the biggest ever quarterly increase in employment.

A total of 280,000 jobs were created in the period. The Office for National Statistics (ONS) said the number of those jobless fell by 167,000 between September and November, to 2.32 million. The ONS said a total of 30.15 million people are now in work. Ca-Cola Chief: World Faces Severe Social Problems if Youth Unemployment Not Tackled. Muhtar Kent, chief executive officer of Coca-Cola, warned the "social peace and mosaic" of the world could break if youth unemployment is not tackled(Reuters) The boss of Coca-Cola has warned that if the world's youth unemployment problem is not solved, it could create severe social problems.

Muhtar Kent, chief executive officer of Coca-Cola, told Bloomberg TV that if the issue is not resolved, the "social peace and mosaic" of the world could crack and everyone could be made "much worse off". Kent, speaking at the World Economic Forum's annual meeting in Davos, also claimed there is a "huge mismatch" between what businesses need from employees and what universities are teaching students.