Evidence against the "normalization" prediction of the early brain overgrowth hypothesis of autism. Background: The frequently cited Early Overgrowth Hypothesis of autism spectrum disorder (ASD) postulates that there is overgrowth of the brain in the first 2 years of life, which is followed by a period of arrested growth leading to normalized brain volume in late childhood and beyond. 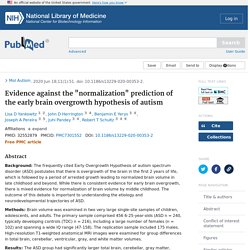 While there is consistent evidence for early brain overgrowth, there is mixed evidence for normalization of brain volume by middle childhood. Large-Scale Exome Sequencing Study Implicates Both Developmental and Functional Changes in the Neurobiology of Autism. Biomarkers in mother’s plasma predict a type of autism in offspring with 100% accuracy. Using machine learning, researchers at the UC Davis MIND Institute have identified several patterns of maternal autoantibodies highly associated with the diagnosis and severity of autism. 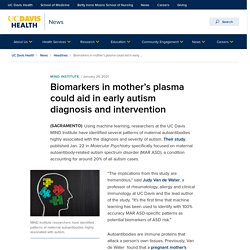 Their study, published Jan. 22 in Molecular Psychiatry specifically focused on maternal autoantibody-related autism spectrum disorder (MAR ASD), a condition accounting for around 20% of all autism cases. MIND Institute researchers have identified patterns of maternal autoantibodies highly associated with autism. “The implications from this study are tremendous,” said Judy Van de Water, a professor of rheumatology, allergy and clinical immunology at UC Davis and the lead author of the study.

“It’s the first time that machine learning has been used to identify with 100% accuracy MAR ASD-specific patterns as potential biomarkers of ASD risk.” Autoantibodies are immune proteins that attack a person’s own tissues. Nerves That Sense Touch May Play Role in Autism. Press Release EMBARGOED FOR RELEASE UNTIL 4 PM ET, October 14, 2020 MINNEAPOLIS – Autism is considered a disorder of the brain. 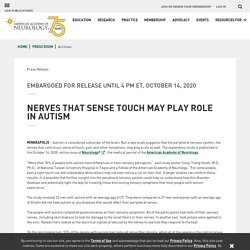 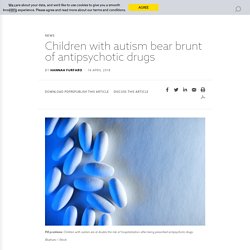 IBushuev / iStock Children with autism and intellectual difficulties are more likely to be prescribed antipsychotic drugs than their typical peers, according to a large study based in the United Kingdom1. Sensory neurons outside the brain drive autistic social behaviors, study suggests: Fly model points to potential new therapeutic target for autism spectrum disorders. A new study from Penn Medicine lends further evidence that the social behaviors tied to autism spectrum disorders (ASD) emerge from abnormal function of sensory neurons outside the brain. 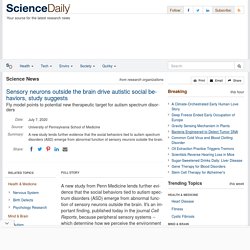 It's an important finding, published today in the journal Cell Reports, because peripheral sensory systems -- which determine how we perceive the environment around us -- makes for more accessible therapeutic targets to treat ASD-related symptoms, rather than the central brain itself. In the fruit fly Drosophila -- a powerful model for studying neurobiology -- the researchers showed that loss of a protein known as neurofibromin 1 caused adult male flies to have social impairments. Those deficits, the researchers also showed, traced back to a primary disruption in a small group of peripheral neurons controlling external stimuli, like smell and touch, that communicate to the brain. "These data raise the exciting possibility that the root of the problem doesn't begin with errors in the brain itself. Untitled. Methodology To better understand the current state of evidence regarding the use of cannabinoids among individuals with ASD, we analyzed recently published peer-reviewed literature. 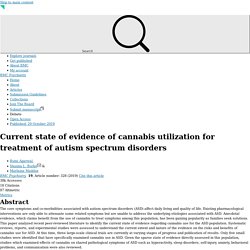 Our inclusion guidelines required that an article must be written in English (or a translated text is available), published between the years 2000 and 2019, and focus on cannabinoids in the context of autism spectrum disorders. Academic and publicly-available electronic databases, including the Cochrane Library, MEDLINE, Applied Social Services Index and Abstracts, CINAHL, the Education Resources Information Center (ERIC), EMBASE, and PsycINFO were used as sources of literature that fulfilled the predefined inclusion criteria. Search strategies were customized for each database given its use and depth of controlled vocabulary related to the variables of interest, though “cannabinoids” and “autism spectrum disorder” were the most often used search phrases. Findings Clinical trials Preliminary studies. Untitled. Untitled. Untitled. Untitled. Achenbach, T. 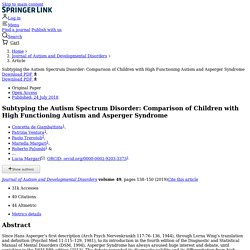 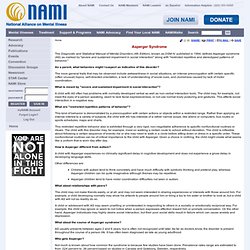 Confusing Asperger’s with mental illness, and mental illness with evil. Adam Lanza, the shooter in last week’s massacre at Sandy Hook Elementary in Newtown, Connecticut As a baby reporter in Texas, I covered what we euphemistically called mental health services in the state. 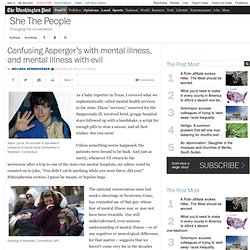 These “services,” reserved for the dangerously ill, involved brief, groggy hospital stays followed up with a handshake, a script for enough pills to stun a moose, and all best wishes: See you soon! Unless something worse happened, the patients were bound to be back. And just as surely, whenever I’d return to the newsroom after a trip to one of the state-run mental hospitals, my editor could be counted on to joke, “You didn’t catch anything while you were there, did you?” Schizophrenia cooties, I guess he meant, or bipolar bugs. Asperger’s Syndrome. History. 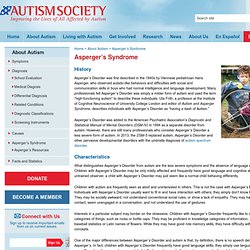 Unvaccinated Children Madness. By J.B. Handley If you want to make someone who defends our current bloated vaccine schedule and believes the science proves vaccines don't cause autism go bonkers, just mention unvaccinated kids. How else to explain some of the altogether nutty things that have come out of the mouths of the vaccine schedule's designated defenders? I'll start with the gold-standard for goofy-speak from Julie Gerberding, an answer so classic it should be entombed for posterity, triggered by a great question from our very own Dan Olmsted. Dan Olmsted: Has the government ever looked at the autism rate in an unvaccinated U.S. population, and if not, why not? But as we're learning, just trying to look at autism in a community the size of Atlanta, it's very, very difficult to get an effective numerator and denominator to get a reliable diagnosis.

Vaccines and Autism: A Tale of Shifting Hypotheses. We use cookies to enhance your experience on our website.