Epigenetics. HLA autism, epilepsy and vaccines. 'Singing Brain' Offers Epilepsy And Schizophrenia Clues. Studying the way a person's brain 'sings' could improve our understanding of conditions such as epilepsy and schizophrenia and help develop better treatments, scientists at Cardiff University have discovered. 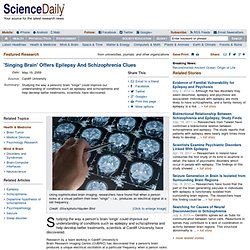 Research by a team working in Cardiff University's Brain Research Imaging Centre (CUBRIC) has discovered that a person's brain produces a unique electrical oscillation at a particular frequency when a person looks at a visual pattern. Importantly, the team found that the frequency of this oscillation appears to be determined by the concentration of a neurotransmitter chemical, GABA, in the visual cortex of each person's brain.

Autism Associated With Brain Inflammation. Many things are a bit off in the brains of people with autism. 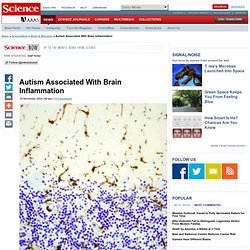 In early childhood, for example, such brains grow faster than normal, and as they mature, key neural circuitry apparently doesn't get hooked up. Now researchers have found evidence that immune cells are more active in autistic brains--causing increased inflammation--and remain that way for much of life. Although the cells involved are normally important for proper brain development and function, it's not clear whether this inflammation is a cause--or a result--of autism. Previous studies of the immune system in autism have focused on observable aspects outside the brain, such as antibodies for measles. A team led by neurologist Carlos Pardo and his postdoc, Diana Vargos, at Johns Hopkins School of Medicine and colleagues has now looked at tissue from the brains of seven people with autism, aged 5 to 44 years, and seven brain autopsy samples from nonautistic people. Enhanced motion perception in autism may point to an underlying cause of the disorder.

Children with autism see simple movement twice as quickly as other children their age, and this hypersensitivity to motion may provide clues to a fundamental cause of the developmental disorder, according to a new study. 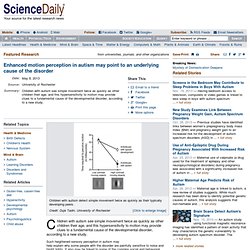 Such heightened sensory perception in autism may help explain why some people with the disorder are painfully sensitive to noise and bright lights. It also may be linked to some of the complex social and behavioral deficits associated with autism, says Duje Tadin, one of the lead authors on the study and an assistant professor of brain and cognitive sciences at the University of Rochester. "We think of autism as a social disorder because children with this condition often struggle with social interactions, but what we sometimes neglect is that almost everything we know about the world comes from our senses. Abnormalities in how a person sees or hears can have a profound effect on social communication," says Tadin. Mortality rate is increased in persons with autism who also have epilepsy, study finds. Autism in children affects not only social abilities, but also a broad range of sensory and motor skills.

A group of investigators from San Diego State University's Brain Development Imaging Laboratory are shedding a new light on the effects of autism on the brain. 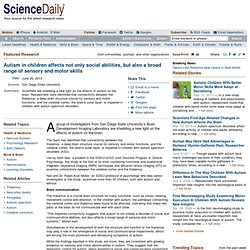 The team has identified that connectivity between the thalamus, a deep brain structure crucial for sensory and motor functions, and the cerebral cortex, the brain's outer layer, is impaired in children with autism spectrum disorders (ASD). Led by Aarti Nair, a student in the SDSU/UCSD Joint Doctoral Program in Clinical Psychology, the study is the first of its kind, combining functional and anatomical magnetic resonance imaging (fMRI) techniques and diffusion tensor imaging (DTI) to examine connections between the cerebral cortex and the thalamus. Nair and Dr. Social symptoms in autistic children may be caused by hyper-connected neurons. Study finds altered brain connections in epilepsy patients. Patients with the most common form of focal epilepsy have widespread, abnormal connections in their brains that could provide clues toward diagnosis and treatment, according to a new study published online in the journal Radiology. 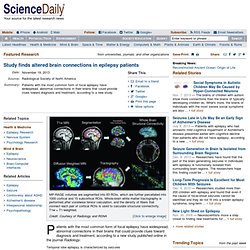 Temporal lobe epilepsy is characterized by seizures emanating from the temporal lobes, which sit on each side of the brain just above the ear. Previously, experts believed that the condition was related to isolated injuries of structures within the temporal lobe, like the hippocampus. But recent research has implicated the default mode network (DMN), the set of brain regions activated during task-free introspection and deactivated during goal-directed behavior. The DMN consists of several hubs that are more active during the resting state. Epileptic seizures can propagate using functional brain networks. The seizures that affect people with temporal-lobe epilepsy usually start in a region of the brain called the hippocampus. 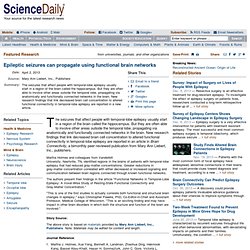 But they are often able to involve other areas outside the temporal lobe, propagating via anatomically and functionally connected networks in the brain. New research findings that link decreased brain cell concentration to altered functional connectivity in temporal-lobe epilepsy are reported in an article in Brain Connectivity, a bimonthly peer-reviewed publication from Mary Ann Liebert, Inc., publishers. Martha Holmes and colleagues from Vanderbilt University, Nashville, TN, identified regions in the brains of patients with temporal-lobe epilepsy that had reduced gray-matter concentrations. Greater reductions in gray-matter concentration correlated with either decreased or increased signaling and communication between brain regions connected through known functional networks. 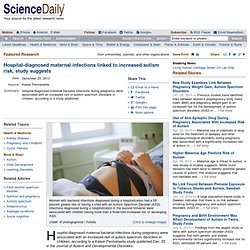 The research contributes new evidence to a body of scientific literature on the role of infection in autism risk and points to areas for further examination. The study included 407 children with autism and 2,075 matched children who did not have autism. The study included infants born between January 1995 and June 1999 who remained members of the Kaiser Permanente health plan for at least two years following birth. "Though infections in pregnant women are fairly common, in this study most were not associated with an increased risk of autism," said Lisa A. Higher maternal age predicts risk of autism. In a study published in the May 2012 issue of the Journal of the American Academy of Child and Adolescent Psychiatry, led by Mr. 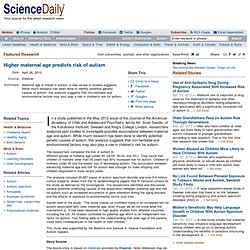 Sven Sandin, of the Karolinska Institutet, Sweden and King's College London, researchers analyzed past studies to investigate possible associations between maternal age and autism. While much research has been done to identify potential genetic causes of autism, this analysis suggests that non-heritable and environmental factors may also play a role in children's risk for autism. The researchers compared the risk of autism in different groups of material age (under 20, 24-29, 30-34, and 35+). They found that children of mothers older than 35 years had 30% increased risk for autism. Older grandfathers pass on autism risk through generations. Men who have children at older ages are more likely to have grandchildren with autism compared to younger grandfathers, according to new research. 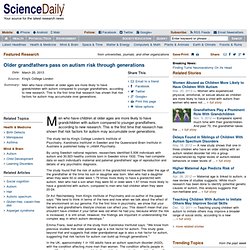 This is the first time that research has shown that risk factors for autism may accumulate over generations. The study led by King's College London's Institute of Psychiatry, Karolinska Institutet in Sweden and the Queensland Brain Institute in Australia is published today in JAMA Psychiatry. By using Swedish national registers, researchers identified 5,936 individuals with autism and 30,923 healthy controls born in Sweden since 1932.

They had complete data on each individual's maternal and paternal grandfathers' age of reproduction and details of any psychiatric diagnosis. Exposure to anti-depressants in pregnancy may increase autism risk, study suggests. Exposure to selective serotonin reuptake inhibitors anti-depressants in early pregnancy may modestly increase risk of autism spectrum disorders, according to a Kaiser Permanente study published online in the current issue of Archives of General Psychiatry. 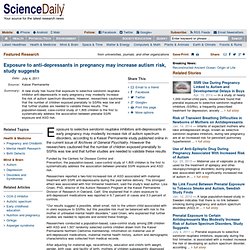 However the researchers cautioned that the number of children exposed prenatally to SSRIs was low and that further studies are needed to validate these results Funded by the Centers for Disease Control and Prevention, the population-based, case-control study of 1,805 children is the first to systematically address the association between prenatal SSRI exposure and ASD risk. Researchers reported a two-fold increased risk of ASD associated with maternal treatment with SSRI anti-depressants during the year before delivery. Researchers conducted a population-based, case-control study among 298 children with ASD and 1,507 randomly selected control children drawn from the Kaiser Permanente Northern California membership.