The word "aspie": 1994-2013; there is also the matter of a good word for (ugh!) "autdar" (Lojban SEZGA'O JIJNU perhaps); & perhaps the only autistic anthem there needs to be is The Animals' "Don't Let Me Be Misunderstood"...

Cardmember - graywyvern. A Field Guide to Earthlings. Top 10 (Apparently) Asperger Characters in Film & TV. I should note that in a number of TV series where the character's AS traits are obvious, writers often write overt denial of Asperger Syndrome into the script so as to maintain some "air of mystery" around the character's remarkable talents. 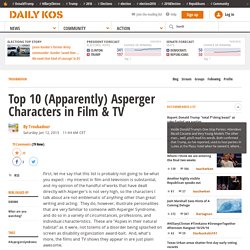 This is pure bullshit, and can simply be ignored. Now for the countdown: 10. Max Cohen (Sean Gullette) in 1998 film π (pi). When I was a little kid my mother told me not to stare into the sun. Pi is one of Darren Aronofsky's classic films before he became prominent, and is one of the reasons he came to the attention of Hollywood. The notion that this character has Asperger's is hard to prove in specific terms beyond those already mentioned, but would almost be irrelevant to the film even if it were correct - which is part of why I include it in this list. 9. 8. 7.

Houseisms (Embedding disabled) 6. Spoiler Alert: If you haven't seen The Wire and intend to some day, skip the following description. 5. The great asperger's novel. Anthem. Temple Grandin: The world needs all kinds of minds. NeuroTribes. The autism pandemic, in other words, is an optical illusion, one brought about by an original sin of diagnostic parsimony. 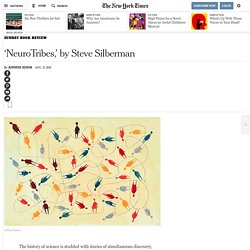 The implications here are staggering: Had the definition included Asperger’s original, expansive vision, it’s quite possible we wouldn’t have been hunting for environmental causes or pointing our fingers at anxious parents. This is, without a doubt, a provocative argument that Silberman is making, one sure to draw plenty of pushback and anger. But he traces his history with scrupulous precision, and along the way he treats us to charming, pointillist portraits of historical figures who are presumed to have had Asperger’s, including Henry Cavendish and Nikola Tesla (the latter, when pressed by two elderly aunts as to which one was prettier, apparently replied that one was “not as ugly as the other”).

Yet this is the only part of Silberman’s sweeping history where I wish he had gone a bit further, though others may differ. His book also drags in places. Loud Hands. Unlike a good, large number of people in the autism community, I had never heard the phrase "quiet hands" until fairly recently, when I read this article by Julia Bascom, which so eloquently describes the abusive side of Applied Behavioral Analysis—commonly touted as the most common "evidence-based" intervention or therapy for autism. 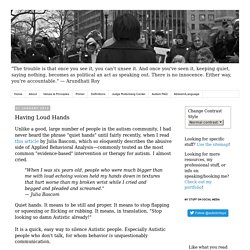 I almost cried. "When I was six years old, people who were much bigger than me with loud echoing voices held my hands down in textures that hurt worse than my broken wrist while I cried and begged and pleaded and screamed. To begin with. The only wise. The politics of asperger's. (via pvidyasagar dot wordpress dot com) don't need this noun. the ego is a matter of boundaries drawn, some of them more permeable than others. it is possible to "sit back" & watch things happen, even in the innermost citadel; to disown one's voice. then what remains? 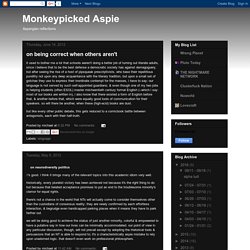 The habit of description. cliches of conceptuality. the old binary pairs, starting with "inside" & "outside". we know that perception occurs, in the beings that live & whose lives depend on being elusive. sometimes our instruments correlate, such as photometers, to the point where we can declare that "light" is something both "internal" & "external". to the instruments: photons. to the mind: brightness. but what explanations are good for, lies elsewhere. we can perfect a machine that turns light into data; we can sharpen our senses, too. what kind of story could we tell, that would make the brightness collapse into one thing, light? Is it enough to measure that reaction begins before the advent of willing it?

Using vulcan. I don't care for the sound of ASS BURGERS, either, and I cannot understand the insistence on adding a superfluous S to the end of a word that already ends with an S, it seems stupid and unwieldy and only adds to the ASS BURGERS sound, so I never use it. 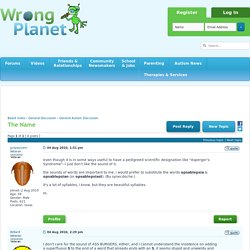 Autistic Culture. Definition Autistic culture is culture built around the ways of speaking, thinking, and acting that come naturally to autistic people, or which have been created in Autistic communities. 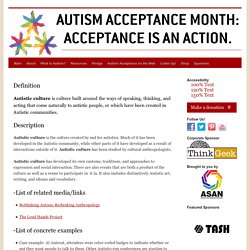 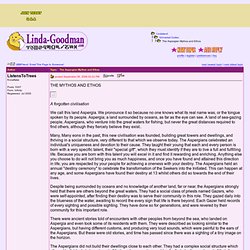 We pronounce it so because no one knows what its real name was, or the tongue spoken by its people. ASPIE STRATEGY: The Hidden Autistics - Asperger's in Adults. Recently I encountered a problem while collaborating with a group therapist with whom I share a patient. 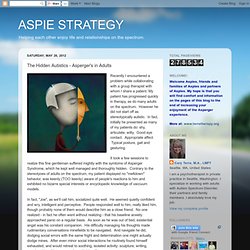 My patient has progressed quickly in therapy, as do many adults on the spectrum. However he did not start off as stereotypically autistic. In fact, initially he presented as many of my patients do: shy, articulate, witty. Good eye contact. Wrong Planet - Autism Community. Monkeypicked Aspie.