Future - What is it like to have never felt an emotion? Caleb is telling me about the birth of his son, now eight months old. 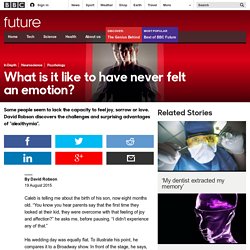 “You know you hear parents say that the first time they looked at their kid, they were overcome with that feeling of joy and affection?” He asks me, before pausing. “I didn’t experience any of that.” His wedding day was equally flat. To illustrate his point, he compares it to a Broadway show. People with the condition call themselves “alexes” Despite taking centre stage at the ceremony, he felt similarly detached from the tides of emotion swelling up in the people around him. In fact, Caleb claims not to feel almost any emotions – good, or bad. What does it mean to fall in love, when you lack the capacity to feel affection? Getting to the bottom of this emotional blindness could shed light on many serious illnesses, from anorexia and schizophrenia to chronic pain and irritable bowel syndrome. 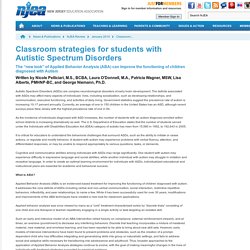 The deficits associated with ASDs may affect many aspects of individuals’ lives, including socialization, such as developing relationships, and communication, executive functioning, and activities of daily living. Government statistics suggest the prevalence rate of autism is increasing 10-17 percent annually. Currently, an average of one in 150 children in the United States has an ASD, although recent surveys place New Jersey with the highest prevalence rate of one in 94. As the incidence of individuals diagnosed with ASD increases, the number of students with an autism diagnosis enrolled within school districts is increasing dramatically as well. The U.S. It is critical for educators to understand the behavioral challenges that surround ASDs, such as the ability to initiate or cease actions, or regulate and modify behavior.

What is ABA? Tips for teachers. SchonmtDNA. UC Davis study finds children with autism have mitochondrial dysfunction. (CHICAGO) -- Children with autism are far more likely to have deficits in their ability to produce cellular energy than are typically developing children, a new study by researchers at UC Davis has found. 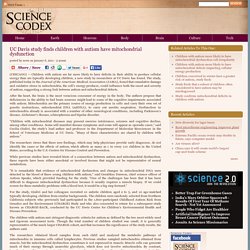 The study, published today in the Journal of the American Medical Association (JAMA), found that cumulative damage and oxidative stress in mitochondria, the cell's energy producer, could influence both the onset and severity of autism, suggesting a strong link between autism and mitochondrial defects. After the heart, the brain is the most voracious consumer of energy in the body.

The authors propose that deficiencies in the ability to fuel brain neurons might lead to some of the cognitive impairments associated with autism. Mitochondria are the primary source of energy production in cells and carry their own set of genetic instructions, mitochondrial DNA (mtDNA), to carry out aerobic respiration. "A 66 percent decrease is significant," Giulivi said. Dysphagia or Swallowing Disorders - National Autism Resources. Dysphagia is a condition that makes it difficult or even painful to swallow. 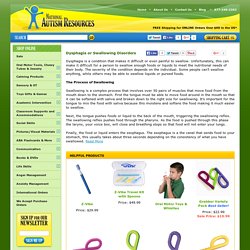 Unfortunately, this can make it difficult for a person to swallow enough foods or liquids to meet the nutritional needs of their body. The severity of the condition depends on the individual. Some people can’t swallow anything, while others may be able to swallow liquids or pureed foods. Study Finds Potential Solution For Feeding, Swallowing Difficulties In Children With DiGeorge Syndrome, Autism - Redorbit. Collaborative research out of the George Washington University (GW) reveals new information on the pathogenesis of feeding and swallowing difficulties often found in children with neurodevelopmental disorders, including autism and intellectual disability. 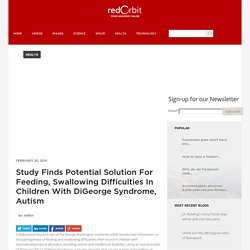 Using an animal model of DiGeorge/22q11 Deletion Syndrome, a genetic disorder that causes autism and intellectual disability, the GW group found clear signs of early feeding and swallowing disruption, and underlying changes in brain development. The research, featured on the cover of Disease Models & Mechanisms, may even lead to a cure for these difficulties — known as pediatric dysphagia. THINKING PERSON'S GUIDE TO AUTISM: Autism: Feeding Issues and Picky Eaters. Judy McCrary Koeppenwww.septar.orgwww.sagetherapy.comwww.sagetherapy.blogspot.com Autistic children are often very picky eaters, or have eating issues. 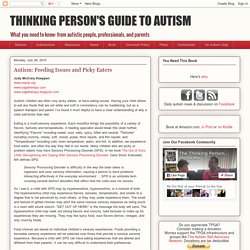 Having your child refuse to eat any foods that are not white and soft in consistency can be maddening, but as a speech therapist and parent I’ve found it most helpful to have a clear understanding of why a child self-limits their diet. Eating is a multi-sensory experience. Each mouthful brings the possibility of a variety of flavors, textures and temperatures. A feeding specialist would break this down further, identifying "Flavors" including sweet, sour, salty, spicy, bitter and neutral; "Textures" including crunchy, chewy, soft, mixed, puree, thick liquids, and thin liquids; and "Temperatures" including cold, room temperature, warm, and hot. Pathfinders for Autism. The following is a brief checklist of things to help you get started. 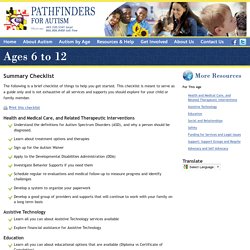 This checklist is meant to serve as a guide only and is not exhaustive of all services and supports you should explore for your child or family member. Print this checklist Health and Medical Care, and Related Therapeutic Interventions Understand the definitions for Autism Spectrum Disorders (ASD), and why a person should be diagnosed.Learn about treatment options and therapiesSign up for the Autism WaiverApply to the Developmental Disabilities Administration (DDA)Investigate Behavior Supports if you need themSchedule regular re-evaluations and medical follow-up to measure progress and identify challengesDevelop a system to organize your paperworkDevelop a good group of providers and supports that will continue to work with your family on a long term basis Assistive Technology Learn all you can about Assistive Technology services availableExplore financial assistance for Assistive Technology Education Safety Back to top.

Broadway Star Speaks Out After Child with Autism Is Shamed for ‘Disrupting’ Show – Kveller. Joanna Valente On Wednesday, September 23, Kelvin Moon Loh left work frustrated and sad after his performance in Rodgers and Hammerstein’s “The King And I” at Lincoln Center Theater in New York City. 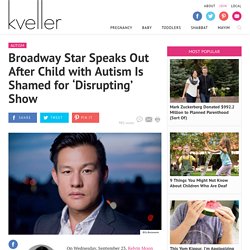 During the second act of the matinee performance, a child with autism was heard yelling in the audience, which Loh wrote about on his Facebook page. However, Loh wasn’t airing his feelings of frustration at the child–he was writing about his frustration at the audience’s reaction. Self-Help Groups for Speech, Language, and Swallowing Disorders. The following organizations provide information about speech, language, and/or swallowing disorders and some sponsor self-help groups. 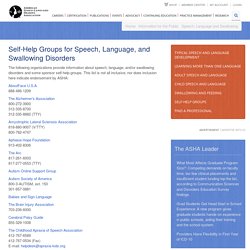 This list is not all inclusive, nor does inclusion here indicate endorsement by ASHA: AboutFace U.S.A. 888-486-1209. Social Language Use (Pragmatics) You have invited your friend over for dinner. 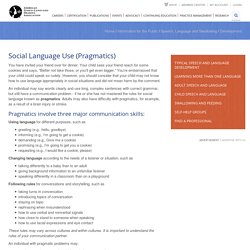 Your child sees your friend reach for some cookies and says, "Better not take those, or you'll get even bigger. " You're embarrassed that your child could speak so rudely. However, you should consider that your child may not know how to use language appropriately in social situations and did not mean harm by the comment. Typical Speech and Language Development. Speech, Language, & Swallowing. Evidence-Based Practice in Communication Disorders. Position Statement Joint Coordinating Committee on Evidence-Based Practice About this Document This position statement was developed by the American Speech-Language-Hearing Association (ASHA) Joint Coordinating Committee on Evidence-Based Practice. Members of the committee included Randall R. Robey (chair); Kenn Apel; Christine A. This position statement is an official policy document of the American Speech-Language-Hearing Association (ASHA).

Evidence-Based Practice Introduction. There is an abundance of definitions of evidence-based practice (EBP). Fortunately, most of them say essentially the same thing. The most well-known definition is that put forth by David Sackett and colleagues: Study: Half of all autism cases trace to rare gene-disabling mutations. FeedingandSwallowingProblemsinChildren. Dysphagia or Swallowing Disorders - National Autism Resources.