Nearly Half Of Children With Autism Wander Or “Bolt” From Safe Places. Study by Kennedy Krieger’s Interactive Autism Network finds children with autism are four times more likely to wander than their unaffected siblings (Baltimore, MD) – A new study published today in the journal Pediatrics (Epub ahead of print) found that nearly half of children with autism spectrum disorders (ASD) are reported to wander or “bolt,” and more than half of these children go missing. 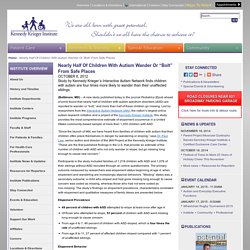 Led by researchers from the Interactive Autism Network (IAN), the nation’s largest online autism research initiative and a project of the Kennedy Krieger Institute, this study provides the most comprehensive estimate of elopement occurrence in a United States community-based sample of more than 1,200 children with ASD. “Since the launch of IAN, we have heard from families of children with autism that their children often place themselves in danger by wandering or eloping,” says Dr. Paul Law, senior author and director of the IAN Project at the Kennedy Krieger Institute. Do People Who Get Lost Really Walk in Circles? New Research Offers an Answer. Headed in the right direction? 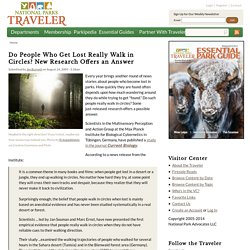 If you're lost, maybe not. Your senses may mislead you. Photo by [h.koppdelaney via Creative Commons and Flickr. Every year brings another round of news stories about people who become lost in parks. Safety and Disabilities. Wandering, also called elopement, is an important safety issue that affects some people with disabilities, their families, and the community. 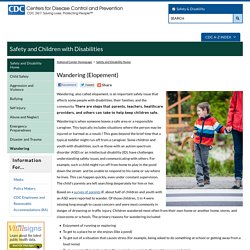 There are steps that parents, teachers, healthcare providers, and others can take to help keep children safe. Wandering is when someone leaves a safe area or a responsible caregiver. This typically includes situations where the person may be injured or harmed as a result.1 This goes beyond the brief time that a typical toddler might run off from a caregiver. Some children and youth with disabilities, such as those with an autism spectrum disorder (ASD) or an intellectual disability (ID), have challenges understanding safety issues and communicating with others. Autism Society - Autism Society. Throughout the country, children and adults with autism are living, going to school, working and enjoying recreational activities in their communities. 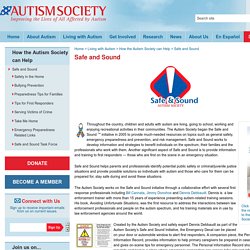 The Autism Society began the Safe and Sound TM initiative in 2005 to provide much-needed resources on topics such as general safety, emergency preparedness and prevention, and risk management. Safe and Sound works to develop information and strategies to benefit individuals on the spectrum, their families and the professionals who work with them. Another significant aspect of Safe and Sound is to provide information and training to first responders — those who are first on the scene in an emergency situation.

7 Tracking Devices to Find a Lost Child with Autism. The increasing prevalence of children wandering has many parents very concerned. 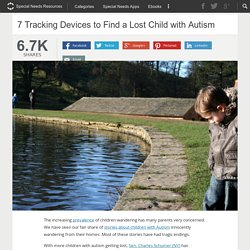 Autism and Wandering: Stop, Seek, Stay. Know what to do if you see a child with autism wandering. 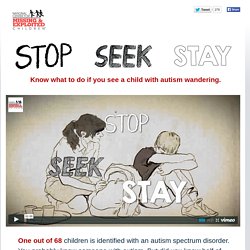 One out of 68 children is identified with an autism spectrum disorder. You probably know someone with autism. But did you know half of these children will wander from a safe place such as a home or school? Stop to help when you see a child who appears lost. Seek assistance from police. Stay until help arrives. Big Red Safety Box. Just $35 will cover the cost of providing this life-saving toolkit at no charge to a family in need. 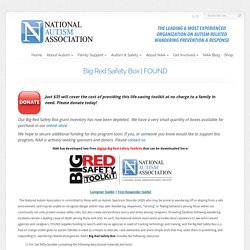 Please donate today! Our Big Red Safety Box grant inventory has now been depleted. We have a very small quantity of boxes available for purchase in our online store. We hope to secure additional funding for this program soon. If you, or someone you know would like to support this program, NAA is actively seeking sponsors and donors. AWAARE - Autism Wandering Resources. Project Lifesaver International. If I could have one wish granted, it would be the Project Lifesaver program would be available at little or no cost to agencies or clients. 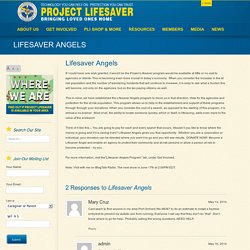 This is becoming even more crucial in today’s economy. When you consider the increase in the at risk population and the number of wandering incidents that will continue to increase, it is easy to see what a burden this will become, not only on the agencies, but on the tax paying citizens as well. This in mind, we have established the Lifesaver Angels program to move us in that direction. Help for the agencies and protection for the at risk population. This program allows us to help in the establishment and support of these programs through through your donations. Autism Speaks Commits Grant to Project Lifesaver to Protect Individuals with Autism Prone to Wandering. Body of Missing 4-Year-Old Autistic Boy, Jayden Morrison, Found in Pond. Former New England Patriots tight end Aaron Hernandez went on trial Friday for the June 2013 murder of a semi-pro football player, a case that exposed the rich young star's drift into violence and stoked a widening debate about off-the-field behavior of NFL athletes. 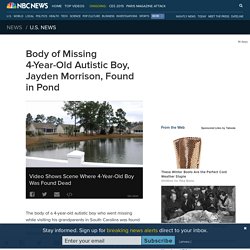 Hernandez, 25, is charged with killing Odin Lloyd, a friend whose body was found in an industrial park in North Attleboro, Massachusetts, shot several times and discarded near a mound of construction waste. The case against Hernandez is largely circumstantial, and if he's convicted he faces life without parole. But the Lloyd murder is just the start of the former tight end's legal troubles. Missing girl wandered into house, made herself at home during search. Jose Leon, missing man with autism, found in Dobbs Ferry - News 12 Westchester. Autistic New York child found dead in South Carolina pond. Horry County Police Department Jayden Morrison, 4, went missing Christmas Eve in Little River as his family visited South Carolina from New York. 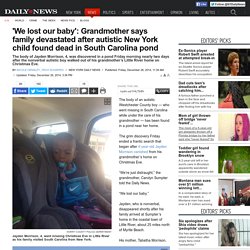 The body of an autistic Westchester County boy — who went missing in South Carolina while under the care of his grandmother — has been found in a pond near her home. The grim discovery Friday ended a frantic search that began after 4-year-old Jayden Morrison vanished from his grandmother’s home on Christmas Eve. “We’re just distraught,” the grandmother, Carolyn Sumpter told the Daily News. “We lost our baby.” Jayden, who is nonverbal, disappeared shortly after his family arrived at Sumpter’s home in the coastal town of Little River, about 25 miles north of Myrtle Beach. Charles Slate/AP Previous Next Enlarge His mother, Tabatha Morrison, had gone out for last-minute Christmas shopping, leaving behind Jayden and his two brothers. Sumpter, after taking a phone call, noticed that only Jayden’s brothers were inside the house. Nhensley@nydailynews.com. Non-verbal autistic teenager Issac Lolya goes missing in south London. Police are asking for help in finding a non-verbal autistic teenager who went missing from south London.

Issac Lolya, 19, was last seen near the McDonald’s located between Camberwell Green and Denmark Hill. Missing Persons with Autism.