Outgrowing Autism? A Closer Look at Children Who Read Early or Speak Late. The headlines read “New study suggests autism can be outgrown”, or “outgrowing autism: a doctor’s surprise and wonder.” 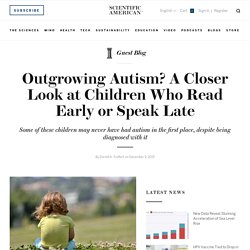 The stories are based on studies reporting that 7-9% of children with a documented early autistic syndrome disorder (ASD) have no symptoms of the disorder on follow-up later in childhood or adolescence. That is good news. The question is how to account for it. Is it possible to simply “outgrow” autism? Was the initial diagnosis wrong? "In an earlier column titled “Oops. Type 2 are children in which intense fascination with letters and numbers, along with early reading and remarkable memory represent ‘splinter skills’ as a part of autistic syndrome disorder (ASD) Type 3 are children who likewise show intense fascination and preoccupation with numbers and letters very early, along with precocious reading skills and remarkable memory. 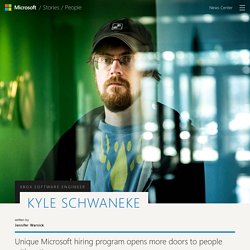 He’d been unemployed for a year and a half, since the indie game studio he’d been working for shut its doors. 8 Things You Need To Know About Dating Someone With Asperger’s. Because it defies easy-to-follow logic, aspies don’t really understand the big idea of romance—but then, who does? 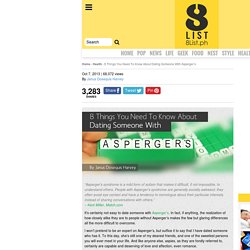 This doesn’t mean they can never be sweet or romantic, though. Through These Autistic Eyes - Home. Aspergians & Other Misfits With John Elder Robison, I. Author John Elder Robison’s Asperger’s syndrome wasn’t diagnosed until he was forty years old. 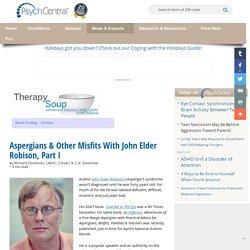 For much of his life he was labeled deficient, difficult, eccentric and just plain bad. His 2007 book Look Me In The Eye was a NY Times bestseller; his latest book, Be Different, Adventures of a Free-Range Aspergian with Practical Advice for Aspergians, Misfits, Families & Teachers was recently published, just in time for April’s National Autism Month. He is a popular speaker and an authority on the subject of Asperger’s. C.R. and I are pleased to welcome him to the Therapy Soup blog at PsychCentral.com. TEACHthroughLove. Aspergian Gal. About Us — Asperger Experts. Danny & Hayden, both diagnosed with Asperger’s, help people affected by Aspergers to understand themselves & the top success strategies in the world, so that they can change their behavior, thinking, and ultimately live the life they want to, not the life that they are limited to. 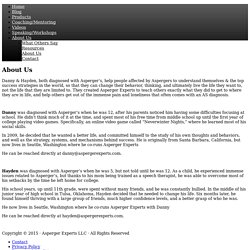 They created Asperger Experts to teach others exactly what they did to get to where they are in life, and help others get out of the immense pain and loneliness that often comes with an AS diagnosis. Understanding Aspergers In Adults - My Life with Aspergers Daniel Wendler at TEDxUniversityofArizona. I Love You, Wait, Are You Dangerous? Alix Generous. Alix Generous is an undergraduate student at the University of Vermont. 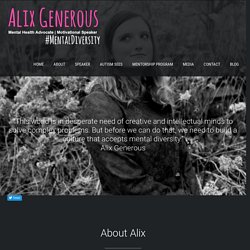 Her childhood was hindered with undiagnosed Asperger’s Syndrome until she learned through perseverance to harness her gifts. Now, Alix has already achieved what most people can only dream to do in their lives: speak at the United Nations, make a significant contribution to science, give two TEDx talks and will be giving another in May, and travelled the world. At 19, Alix won a research competition for her scientific work in quorum sensing and coral reefs, which she presented to the United Nations in the fall of 2012. In November 2013, she was a youth delegate for the United Nations Climate Change Conference (COP19) in Warsaw where she negotiated technology transfer and issues of medical importance. Alix has more than three years neuroscience research experience at the Medical University of South Carolina (MUSC), The Tufts University School of Medicine, and the University of Vermont.

Girls Inc. Improving Podium Skills. What is Asperger’s Syndrome? – The “Triad of Impairments” Asperger’s syndrome is a form of autism. 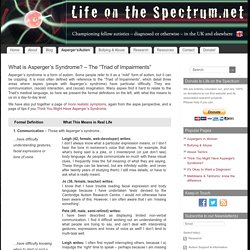 Some people refer to it as a “mild” form of autism, but it can be crippling. It is most often defined with reference to the “Triad of Impairments”, which detail three areas where aspies (people with Asperger’s syndrome) have particular difficulty. They are: communication, (social) interaction, and (social) imagination. Many aspies find it hard to relate to the Triad’s medical language, so here we present the formal definitions on the left, with what this means to us on a day-to-day level. Aspergers: Through My Eyes. My name is Steph and I am 26 years old. 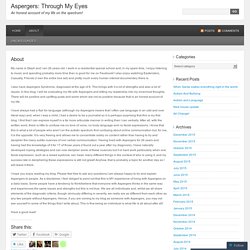 I work in a residential special school and, in my spare time, I enjoy listening to music and spending probably more time than is good for me on Facebook! I also enjoy watching Eastenders, Casualty, Friends (I own the entire box set) and pretty much every human interest documentary there is. I also have Aspergers Syndrome, diagnosed at the age of 8. This brings with it a lot of strengths and also a lot of issues. Autismsees. Online Social Skills Guide - Improve Your Social Skills. NeuroTribes: The Legacy of Autism and the Future of Neurodiversity - Kindle edition by Steve Silberman, Oliver Sacks. Politics & Social Sciences Kindle eBooks @ Amazon.com. So, Did You Grow Out of It? I have, seriously, been asked this question. 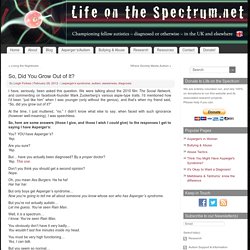 We were talking about the 2010 film The Social Network, and commenting on facebook-founder Mark Zuckerberg’s various aspie-type traits. Online Social Skills Guide - Improve Your Social Skills.