The dark side of social media: Baroness Susan Greenfield says social media is rewiring our brains. WE’RE all guilty of it. 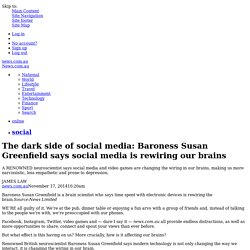 We’re at the pub, dinner table or enjoying a fun arvo with a group of friends and, instead of talking to the people we’re with, we’re preoccupied with our phones. Facebook, Instagram, Twitter, video games and — dare I say it — news.com.au all provide endless distractions, as well as more opportunities to share, connect and spout your views than ever before. But what effect is this having on us? More crucially, how is it affecting our brains? Renowned British neuroscientist Baroness Susan Greenfield says modern technology is not only changing the way we interact, it is changing the wiring in our brain. Professor Greenfield, who is also a member of the British upper house, says the hyper-connectedness of today’s youth gives them shorter attention spans and makes them more narcissistic, more susceptible to depression and anxiety, and less empathetic. Her interest in the subject has culminated in her book Mind Change, released in August, in which she argues: Autism genes identified using new approach.

Princeton University and Simons Foundation researchers have developed a machine-learning approach that for the first time analyzes the entire human genome to predict which genes may cause autism spectrum disorder, raising the number of genes that could be linked to the disorder from 65 to 2,500. 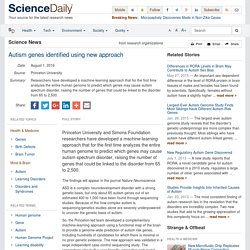 The findings will appear in the journal Nature Neuroscience. ASD is a complex neurodevelopment disorder with a strong genetic basis, but only about 65 autism genes out of an estimated 400 to 1,000 have been found through sequencing studies. Because of the how complex autism is, sequencing/genetics studies alone are severely underpowered to uncover the genetic basis of autism. So, the Princeton-led team developed a complementary machine-learning approach using a functional map of the brain to provide a genome-wide prediction of autism risk genes, including hundreds of candidates for which there is minimal or no prior genetic evidence. About Us - Autism Society of Tidewater Virginia. 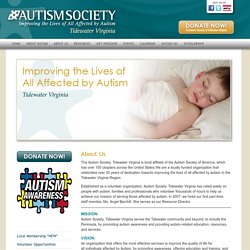 Established as a volunteer organization, Autism Society, Tidewater Virginia has relied solely on people with autism, families and professionals who volunteer thousands of hours to help us achieve our mission of serving those affected by autism. In 2007, we hired our first part-time, staff member, Ms. Angel Barnhill. She serves as our Resource Director. Patty Sisco: I’ve had it all wrong about autism.

Through a series of serendipitous events, I recently had the once-in-a-lifetime opportunity to interview Temple Grandin, Ph.D., a renowned expert on autism who happens to be autistic herself. 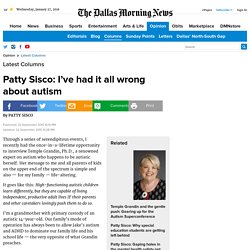 Her message to me and all parents of kids on the upper end of the spectrum is simple and also — for my family — life-altering. It goes like this: High-functioning autistic children learn differently, but they are capable of living independent, productive adult lives IF their parents and other caretakers lovingly push them to do so. I’m a grandmother with primary custody of an autistic 14-year-old. Our family’s mode of operation has always been to allow Jake’s autism and ADHD to dominate our family life and his school life — the very opposite of what Grandin preaches. She doesn’t mince words. Start working with your autistic child by age 2 or 3. Expose your child to a variety of experiences interacting with others. Push … gently. Limit video games to one hour per day. 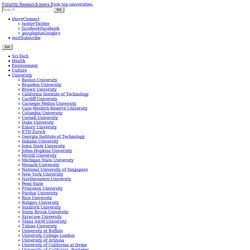 “Our findings show that those afflicted with autism have unstable blood vessels, disrupting proper delivery of blood to the brain,” explains Efrain Azmitia, a biology professor at New York University and senior author of the study published in the Journal of Autism and Developmental Disorders. Girls and boys with autism differ in behavior, brain structure. “Autism has primarily been studied from the viewpoint of boys with the disorder,” said Menon, who holds the Rachael L. and Walter F. 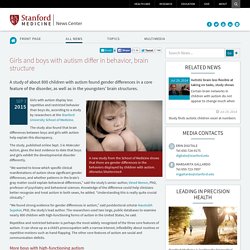 Nichols, MD, Professorship. “Understanding gender differences can help in identifying the behavioral skills that are most important to remediate in girls vis-a-vis boys.” The study examined the severity of autism symptoms in 128 girls and 614 boys registered with the National Database for Autism Research. The children ranged in age from 7 to 13, had IQ scores above 70, and had been evaluated with standard tests for autistic behavior. The boys and girls were matched for age, and had the same average IQ.