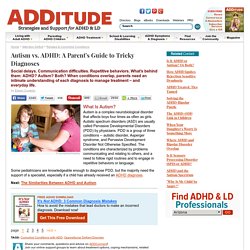 ADHD and Autism: Could Your Child Have Both Conditions? Your child has been diagnosed with ADHD. 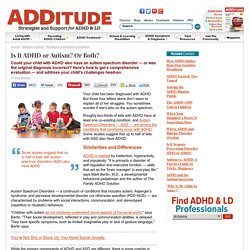 But those four letters alone don't seem to explain all of her struggles. You sometimes wonder if she's also on the autism spectrum. Roughly two-thirds of kids with ADHD have at least one co-existing condition, and Autism Spectrum Disorders — ASD — are among the conditions that commonly occur with ADHD. Some studies suggest that up to half of kids with ASD also have ADHD.

Similarities and Differences. Autistic Torture - How Can I Explain It? Before I jump back into ridiculous, funny, or the usual SDL things, I wanna take a moment to discuss autism, and specifically the “tantrums” or other episodes that people with autism (including Asperger’s) sometimes have. 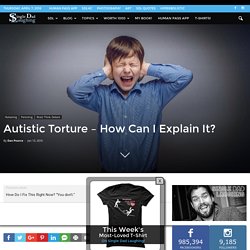 If you’re like me, you’ve witnessed plenty of them throughout your life. You’ll remember the time the young woman with Aspberger’s lost control of her dogs, one of which then chomped into my leg. She dropped to the ground, began rolling around in the parking lot, and screaming obscenities at me. Carly's Café - Experience Autism Through Carly's Eyes. Experience 60 seconds of how it feels to live with autism. Certain things can drive me up a wall. 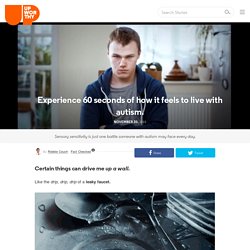 Like the drip, drip, drip of a leaky faucet. Make it stop already! GIFs via the National Autistic Society/YouTube. Or deafening, nonstop police sirens outside my window that just. won't. quit. Nope, nope, nope. See what a kid with autism sees for 90 eye-opening seconds. ​Imagine everything you'd experience while strolling through a mall — the smells, the sights, the things to touch... 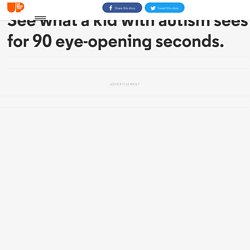 Now imagine all of those feelings and sensations times, like, a hundred. It might sort of feel like this: Illustration courtesy of The National Autistic Society. Alpha, Beta Brainwaves Differ in Those With Autism. A new study shows that brain waves in people with autism spectrum disorder (ASD) differ from those in people without ASD. 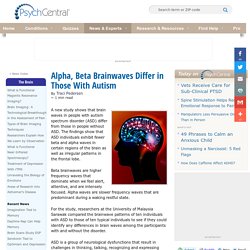 The findings show that ASD individuals exhibit fewer beta and alpha waves in certain regions of the brain as well as irregular patterns in the frontal lobe. Beta brainwaves are higher frequency waves that dominate when we feel alert, attentive, and are intensely focused. Alpha waves are slower frequency waves that are predominant during a waking restful state. For the study, researchers at the University of Malaysia Sarawak compared the brainwave patterns of ten individuals with ASD to those of ten typical individuals to see if they could identify any differences in brain waves among the participants with and without the disorder. 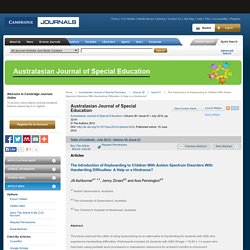 Jill Ashburnera1 c1, Jenny Ziviania2 and Ana Penningtona3 a1 Autism Queensland, Australia. Children with autism show specific handwriting impairments. Handwriting gets in the way of educating autistic students. Why Haven’t They Done That Yet? 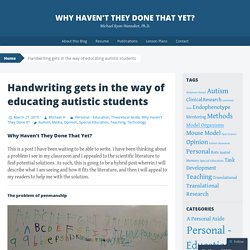 This is a post I have been waiting to be able to write. Soldiers with autism give army rare view into intel, and disorder. The idea was born on the lawn. 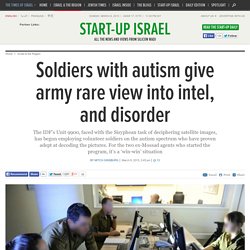 Some two dozen middle-aged men seated in a semicircle had come in February 2011 to comfort Dror and Yehudit Rotenberg, who had lost their son, Staff Sgt. Nadav Rotenberg, a month prior just outside Gaza. The men all knew each other well – they had served together with Dror in the Paratrooper Brigade recon unit in the seventies – but hadn’t seen each other in decades. Get the Start-Up Israel's daily newsletter and never miss our top stories Free Sign up! Rather than rehash old war stories, they went around the circle and talked about their lives. Boy Genius Diagnosed With Autism Has IQ Higher than Einstein. Israeli Autism Research Helps to Explain Why So Many Boys are Diagnosed. Researchers at Tel Aviv University sought to explain why more boys than girls are diagnosed with autism each year. 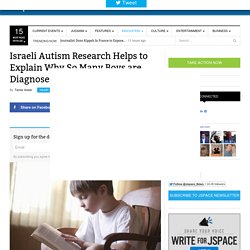 The answer, they discovered, may be all in the genes. In a study published in the Translational Psychiatry, the TAU researchers said that the key to the gender difference in autism may be a gene discovered 15 years ago by TAU professor Illana Gozes. Gozes said the gene, identified as ADNP, is important to brain function. “The gene is responsible for creating the protein, also called ADNP, that is crucial for brain development in the fetus,” she said. “We later found that ADNP has significant expression in the hippocampus of the brain, in an area that is directly connected to memory and learning ability.” Autism's Gut-Brain Connection. Stress can send your stomach into a painful tailspin, causing cramps, spasms and grumbling.

But trouble in the gut can also affect the brain. This two-way relationship may be an unlikely key to solving one of medicine’s most pressing — and perplexing — mysteries: autism. Nearly 60 years after the disorder was first identified, the number of cases has surged, and the United Nations estimates that up to 70 million people worldwide fall on the autism spectrum.

Yet there is no known cause or cure. The gut bacteria in autistic individuals aren’t just different… they may actually contribute to the disorder. U.S. autism rates up 30% two years; N.J. is highest in study. The rates, based on 2010 data, were up 30 percent from two years earlier. They have more than doubled both nationwide and in New Jersey since the first report was done in 2000. The CDC estimates that 1.2 million people under the age of 21 are on the autism spectrum. Walter Zahorodny, an epidemiologist and psychologist at Rutgers New Jersey Medical School who directed data collection in New Jersey, said the new report should put to rest the argument over whether the increase in autism diagnoses stems from growing awareness or reflects growing numbers of children with the disabling condition. "It's a true increase," he said. New study finds that individuals with Asperger’s Syndrome don’t lack empathy – in fact if anything they empathize too much.

Brenda Rothman: Autism Is Not a Parenting Fail. When my child was younger, everything seemed so hard. He didn't hold a bottle, sit up, walk or talk on the pediatrician's timeline. We did physical therapy, occupational therapy and speech therapy. I asked every provider I could, "Why does he repeat phrases? " When Autistics Grade Other Autistics. The Autistic Victims of Sandy Hook. Don’t Blame Autism for Newtown. Autism is Linked to Violence - Evil Autie. Violence is linked to autism. I Am Adam Lanza's Mother. I am Adam Lanza's Mother. Friday’s horrific national tragedy—the murder of 20 children and six adults at Sandy Hook Elementary School in New Town, Connecticut—has ignited a new discussion on violence in America. In kitchens and coffee shops across the country, we tearfully debate the many faces of violence in America: gun culture, media violence, lack of mental health services, overt and covert wars abroad, religion, politics and the way we raise our children.

"I Am Adam Lanza’s Psychiatrist": A Response From the Mental Health Trenches to "I Am Adam Lanza’s Mother" “I am sharing this story because I am Adam Lanza's mother. Add and autism connection. Www.usevisualstrategies.com. Children With Autism May Benefit From The Introduction Of A Pet Into The Family. I Am in Here: The Journey of a Child with Autism Who Cannot Speak but Finds Her Voice « Nina\’s Reading Blog. Posted by nliakos on May 4, 2012 by Elizabeth M.