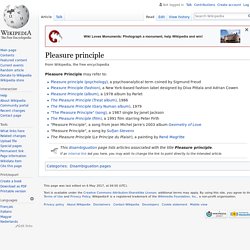 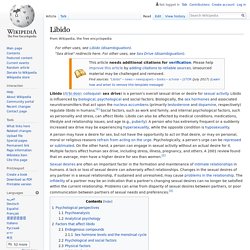 Libido is influenced by biological, psychological and social factors. Biologically, the sex hormones and associated neurotransmitters that act upon the nucleus accumbens (primarily testosterone and dopamine, respectively) regulate libido in humans.[1] Social factors, such as work and family, and internal psychological factors, such as personality and stress, can affect libido. Libido can also be affected by medical conditions, medications, lifestyle and relationship issues, and age (e.g., puberty). A person who has extremely frequent or a suddenly increased sex drive may be experiencing hypersexuality, while the opposite condition is hyposexuality. Sexual desires are often an important factor in the formation and maintenance of intimate relationships in humans.

Psychological perspectives[edit] Psychoanalysis[edit] Eros. In Greek mythology, Eros (, ;[2] Ancient Greek: Ἔρως, "Desire") is the Greek god of love and sex. Beyond the Pleasure Principle. Importance[edit] In sections IV and V, Freud posits that the process of creating living cells binds energy and creates an imbalance. 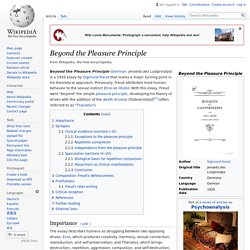 It is the pressure of matter to return to its original state which gives cells their quality of living. The process is analogous to the creation and exhaustion of a battery. This pressure for molecular diffusion can be called a "death-wish". Wilhelm Fliess. Wilhelm Fliess (German: Wilhelm Fließ; 24 October 1858 – 13 October 1928) was a German Jewish otolaryngologist who practised in Berlin. 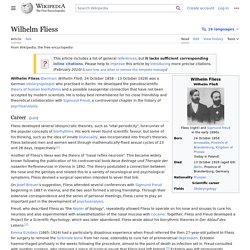 He developed highly eccentric theories of human biorhythms and a possible nasogenital connection that have not been accepted by modern scientists. He is today best remembered for his close personal friendship and theoretical collaboration with Sigmund Freud, a controversial chapter in the history of psychoanalysis. Career[edit] British Psychoanalytical Society. Peripheral nervous system. Neurological disorder. Causes[edit] Although the brain and spinal cord are surrounded by tough membranes, enclosed in the bones of the skull and spinal vertebrae, and chemically isolated by the blood–brain barrier, they are very susceptible if compromised. 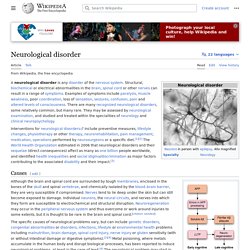 Nerves tend to lie deep under the skin but can still become exposed to damage. Individual neurons, and the neural networks and nerves into which they form, are susceptible to electrochemical and structural disruption. Neuroregeneration may occur in the peripheral nervous system and thus overcome or work around injuries to some extents, but it is thought to be rare in the brain and spinal cord.

In a substantial minority of cases of neurological symptoms, no neural cause can be identified using current testing procedures, and such "idiopathic" conditions can invite different theories about what is occurring. Neurology. A neurologist is a physician specializing in neurology and trained to investigate, or diagnose and treat neurological disorders.[2] Neurologists may also be involved in clinical research, clinical trials, and basic or translational research. 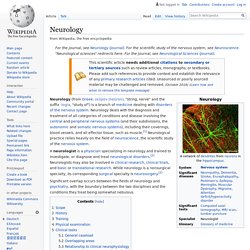 While neurology is a nonsurgical specialty, its corresponding surgical specialty is neurosurgery.[2] Significant overlap occurs between the fields of neurology and psychiatry, with the boundary between the two disciplines and the conditions they treat being somewhat nebulous. Scope[edit] A large number of neurological disorders have been described as listed. Ernest Jones. Alfred Ernest Jones FRCP MRCS (1 January 1879 – 11 February 1958) was a Welsh neurologist and psychoanalyst. 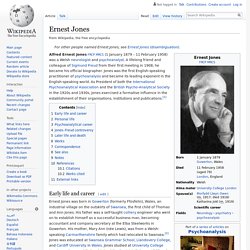 A lifelong friend and colleague of Sigmund Freud from their first meeting in 1908, he became his official biographer. Wilhelm Stekel. Wilhelm Stekel (German: [ˈʃteːkəl]; 18 March 1868 – 25 June 1940) was an Austrian physician and psychologist, who became one of Sigmund Freud's earliest followers, and was once described as "Freud's most distinguished pupil".[1] According to Ernest Jones, "Stekel may be accorded the honour, together with Freud, of having founded the first psycho-analytic society"; while he also described him as "a naturally gifted psychologist with an unusual flair for detecting repressed material. 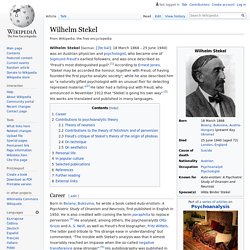 "[2] He later had a falling-out with Freud, who announced in November 1912 that "Stekel is going his own way".[3] His works are translated and published in many languages. Career[edit] Dream interpretation. Interpretation of dreams, engraving from an English chapbook. 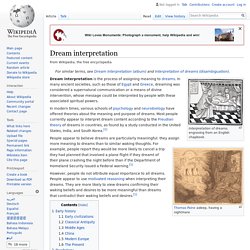 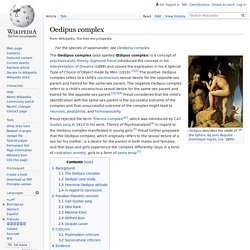 Freud revised the book at least eight times and, in the third edition, added an extensive section which treated dream symbolism very literally, following the influence of Wilhelm Stekel. Freud said of this work, "Insight such as this falls to one's lot but once in a lifetime. Carl Jung on "Angels" – Anthology. Why, when Pope Pius XII in one of his last discourses deplored that the world was no longer conscious enough of the presence of angels, he was saying to his faithful Catholics in Christian terms exactly what I am trying to say in terms of psychology to those who stand more chance of understanding this language than any other.

~Carl Jung, C.G. Jung's view on fallen angels. The 2,000-year-old 'Book Of Giants' Describes how the Nephilim were destroyed. Over 50 years ago, researchers came across one of the most important archaeological discoveries of the century when they discovered thousands of ancient scrolls. Among them, they found The Book Of Giants which speaks of the Nephilim and their destruction. One of the most important archaeological discoveries was made at the Qumran Caves over half a century ago. Among the artifacts discovered were thousands of antique scrolls that offered extremely important insight into our past. Many of these scrolls helped complete a lost fragment in Earth’s history. Nephilim. The Book of Giants. Apocryphal Jewish book expanding a narrative in the Hebrew Bible, discovered at Qumran Fallen Stars: Mighty archangels lead Heaven's angelic host as they cast Lucifer (Satan) and his rebellious angels from celestial realms.

An illustration of the 'War in Heaven' for Milton's Paradise Lost by Gustave Doré. Origins in ancient Jewish tradition[edit] During the twentieth century a number of finds shed considerable light on the literary evidence for the Book of Giants.[3] The 1943 publication by W. The ancuent book lf enoch. Book of Enoch. Hebrew religious text, ascribed to Enoch. Making Sense of Big Data With Virtual Reality And The Unconscious Mind. 3,789 views|Aug 16, 2014,10:18 am A single death is a tragedy; a million deaths is a statistic, is a well-known quote – often mistakingly attributed to Stalin. Taoist Healing Imagery. MIT Visualizing Cultures.

The ability to control dreams may help us unravel the mystery of consciousness. We spend around six years of our lives dreaming – that’s 2,190 days or 52,560 hours. Scientists Are Finally Figuring Out Why We Dream—and the Brain Processes Responsible. The brain’s dream factory has been identified, with scientists finding a so-called "hot zone" that can be used to predict if a person is dreaming and what they are dreaming about.

The findings, published Monday in the journal Nature Neuroscience, challenge our understanding of conscious experiences during sleep, and could shed light on more fundamental questions, like why we dream at all. PSYCHOLOGY AP: STATES OF CONSCIOUSNESS Flashcards. Dreaming and the brain: from phenomenology to neurophysiology. Waking and dreaming consciousness: Neurobiological and functional considerations. Dream States: A Peek into Consciousness. IF YOU HAVE SEEN the recent Hollywood blockbuster Inception, a movie that does to dreaming what The Matrix did for virtual reality, you may have been holding your breath as Ariadne, an architecture student, folded the streets of Paris over herself like a blanket. This stunning sequence, an homage to M.