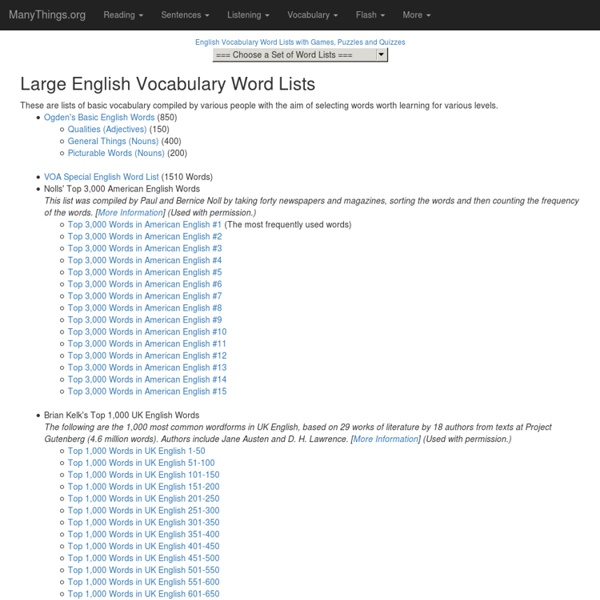 International English wordlist (DOS format) A list of 109582 English words compiled and corrected in 1991 from lists obtained from the Interociter bulletin board. The original read.me file said that the list came from Public Brand Software. This word list includes inflected forms, such as plural nouns and the -s, -ed and -ing forms of verbs. Thus the number of lexical stems represented in the list is considerably smaller than the total number of words. Homophones (comma-delimited database format) The list of American English homophones is based on the book _Handbook of Homophones_ by William Cameron Townsend, 1975. Each set of homophones is on a single line separated by commas.

Scribble is a word game for all ages. Scribble is a word game for kids, adults, families, and classrooms. The goal is to create as many words as you can using the ten letters that are randomly generated in the box below. Just scribble down the words on a piece of paper as fast as you can think of them. You can even make it into a contest with your family, classmates or friends. Make up your own rules! Football Vocabulary: 23 Essential Words and Phrases This is part three of a series on football vocabulary in English. If you want more, check out How to Say Football Scores in English and 9 People in Football (And What They Do). Well, we’ve made it this far! It’s almost the end of a rather exciting World Cup. I’m actually one of those people who usually run to the hills while football mania is going on. But this year has been really rather interesting. And I’ve realised that football is quite a complex sport. I’ve also realised something else: it’s sometimes good fun to talk about football. And, as we come to the final match, now is one of those times! Parts of the Football Stadium When you’re talking about football, it’s important to know the different parts of the stadium and the pitch. Rules in Football But what about the actual game itself? We sometimes want to be able to describe what happened in the match, right? Football, like most sports, has a lot of rules and procedures. The Different Stages of the Match First half / Second half Half-time

Fun with aspell word lists The GPL spell checking program aspell has support for many languages, including my native language, Dutch. Since it's open source, so are the dictionaries, which means that we should be able to extract a word list. And complete word lists for a language are simply fun to play with. Unfortunately aspell is too advanced to use a plain text word list. aspell dump master This will print the entire word list for your default language. aspell -l nl dump master The argument to -l is the ISO 639 language code (see man aspell for details). When we run aspell dump master for Dutch we get something unexpected: blaat/MWPG bloeit/KU bloot/G blootte blote/N There are strange tags attached to the end of many words. aspell -l nl dump master | aspell -l nl expand That's better: blaat geblaat blaatten blaatten blaatte blaten bloeit opbloeit uitbloeit bloot gebloot blootte blote bloten If we now pipe this through tr we get all variations on separate lines as well. SFX M N 13 SFX M 0 ben b SFX M 0 den d ...

Ten fun exercises to improve your memory Our brain is one lazy mechanism that just loves doing nothing and taking days off whenever it can. That’s why we should always force it to do certain things. To train your gray matter, we offer you a few interesting brain exercises from Angels Navarro’s book ’El libro de la memoria’ (’The book of Memory’). Exercise 1 Difficulty level: Medium Look carefully for 1 minute at the dots and lines in the upper section. Exercise 2 Difficulty level: Easy Try to come up with some visual and verbal associations for the following numbers based on their forms and how they look. Answer the following questions: 1. Exercise 3 Look at the geometrical shapes on the left for 20 seconds. Exercise 4 Look at the shopping list below. Exercise 5 Difficulty level: Hard Look at these animals for 1 minute. Now look away from the picture and try to name all those animals in alphabetical order. Exercise 6 Study all the words in the two columns. Now look at the columns below and say out loud which words are missing. Exercise 7

The Big, Fat English Tenses Overview (With PDF) Would you prefer to read this post as a PDF? Click here. Also, check out the Ultimate Guide to Numbers in English. First, take a look at this image. It shows all of the tenses in English. Want a closer look? OK. Yes, it’s a little confusing at first, but don’t panic! Let’s start with the past… The past tenses in English What’s going on here? OK, so as you can see, we have three main tenses going on. When we talk about the present, we’re just looking at what’s happening now and reporting it. When we talk about the future, we’re making plans and predictions. But when we talk about the past, we’re actually telling a story. If we go outside this story time frame, it’s important that we show it so that our story is clear and we understand what happened first and what happened second and, most importantly, what happened outside the story time frame. 1. Why do we use it? We use the past simple if we want to express a single action that happened in the past: …or a state in the past: How do we use it? 2.

Wing Balans by Varier The best kneeling chair ever created. Quick-ship chairs ship within 1-2 business days. Below we have included swatches for upholsteries that qualify as quick-ship. If you are interested in an upholstery not listed as quick-ship, please visit our special order Wing Balans page. Like all of the chairs in Varier's balans family, the Wing balans opens the angle between the thighs and torso. Instead of the static, upright position of traditional chairs, the Wing Balans allows the spine to find its natural curve. An adjustable lift and knee pad makes the Wing Balans an ideal option for a variety of work heights and users. The Varier Wing Balans is the perfect instrument for the ever-changing demands of today's work places and lifestyles. The benefits are not just for adults, as the posture, breathing, and energy enhancements of active sitting have been directly correlated with improved homework performance in adolescents. Humans were created to move, not to sit still. Wing Balans Features

Flippity.net: Easily Turn Google Spreadsheets into Flashcards and Other Cool Stuff 11 Drawings to Remember English Rules Forever This blog post was so popular that I turned it into a book: 102 Little Drawings That Will Help You Remember English Rules FOREVER (Probably). It’s available as an eBook and paperback. Click here to get your copy. Have you ever had a problem that you just couldn’t solve for ages? Then suddenly someone says one word, or just shows you one simple picture, and you get that “aha” moment — you suddenly understand everything? Well, over the many, many years I’ve been teaching English, I’ve found that some simple images can help explain rules in English that cause so many problems for people. Hopefully, they’ll help you, too. So here are some of my most effective little pictures to help you remember English rules. Forever! Maybe. In, on or at for place? I’ve actually talked about this in a previous post, but it’s good to see it in a different way. Usually (but not always), we use: “In” when it’s 3-dimensional I’m in this really dark room, and I can’t get out. “On” when it’s a straight line A or the? OK. OK.

Tutorial: Macro and Hotkey Creation This brief introduction will help you start scripting your own macros and hotkeys right away. Tutorial Contents Creating a script Each script is a plain text file containing commands to be executed by the program (AutoHotkey.exe). A script may also contain hotkeys and hotstrings, or even consist entirely of them. To create a new script: Download and install AutoHotkey. In the line above, the first character "#" stands for the Windows key; so #space means holding down the Windows key then pressing the spacebar to activate the hotkey. Save and close the file. Notes: Multiple scripts can be running simultaneously, each with its own icon in the taskbar notification area. Launching a program or document The Run command is used to launch a program, document, URL, or shortcut. Run Notepad Run C:\My Documents\Address List.doc Run C:\My Documents\My Shortcut.lnk Run www.yahoo.com Run mailto:someone@somedomain.com A hotkey can be assigned to any of the above examples by including a hotkey label. ^!

EAP Vocabulary Academic Word List Coxhead (2000). The most frequent word in each family is in italics. There are 570 headwords and about 3000 words altogether. If you have an iPhone or an Android phone and want to practise these words, you could try: Flashcards Deluxe. *Definitions linked to the online Cambridge Dictionary by permission of Cambridge University Press.