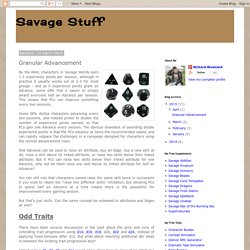 This means that PCs can improve something every two sessions. Some GMs dislike characters advancing every two sessions, and instead prefer to double the number of experience points earned, so that PCs gain one Advance every session. The obvious drawback of awarding double experience points is that the PCs advance at twice the recommended speed, and can rapidly outpace the challenges in a campaign designed for characters using the normal advancement rules. One Advance can be used to raise an attribute, buy an Edge, buy a new skill at d4, raise a skill above its linked attribute, or raise two skills below their linked attribute. 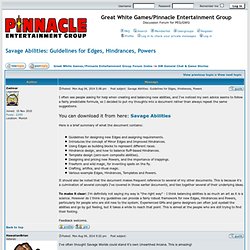 The gang also discussed Savage Abilities (starting at 35:00 on the video). One of the comments brought up was that some of the example powers in Savage Abilities recreate powers from the core rules. This is actually intentional, but I realised that I'd never really made that clear, so I've rephrased the text in the document to clarify the intent (uploaded as version 6). In fact the examples recreate almost all of the powers from the core rules, as they are intended to serve as proof of concept for my power creation system. Pinnacle Entertainment Group. Medieval Demographics Made Easy.

Fantasy worlds come in many varieties, from the "hard core" medieval-simulation school to the more fanciful realms of high fantasy, with alabaster castles and jeweled gardens in the place of the more traditional muddy squalor. 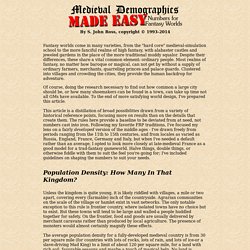 Despite their differences, these share a vital common element: ordinary people. Most realms of fantasy, no matter how baroque or magical, can not get by without a supply of ordinary farmers, merchants, quarreling princes and palace guards. Clustered into villages and crowding the cities, they provide the human backdrop for adventure. Of course, doing the research necessary to find out how common a large city should be, or how many shoemakers can be found in a town, can take up time not all GMs have available. Friends, Foes & Followers — Part 1 : Lýthia.com. SW in a Nutshell. Taken from the Savage Worlds Test Drive. 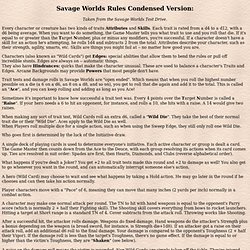 Every character or creature has two kinds of traits Attributes and Skills. Each trait is rated from a d4 to a d12, with a d6 being average. When you want to do something, the Game Master tells you what trait to use and you roll that die. Demon Generator. Trww SW character creation checklist. Bags+of+Holding.png (PNG Image, 1300 × 634 pixels) - Scaled (78%) 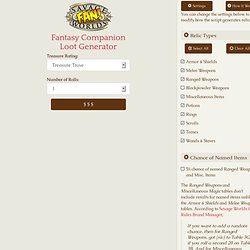 Below are a few notes regarding the decisions governing the script and features. Multiple Rolls Users can now roll for multiples of a given treasure rating. For example, a user can roll Meager treasure four times all at once. The output will include the gold and any potential relics for each treasure as well as a total amount of gold (not including the cost of any relics). Links to Relics I've added the ability to link to or bookmark individual items generated via a query string.

Print Relic Cards You can print your relics as cards for distributing and managing at the game table. Minor and Major Artifacts Fixed Aspects: For Powers of Minor or Major Artifacts, the Fantasy Companion instructs, "Powers which can affect multiple aspects (such as boost trait) must have a single, fixed aspect chosen during creation. " Power Points for Scrolls. Savagepedia - Gaming Aids. Paper Friends. Fiasco-Style Relationships: Sly Flourish. By Mike Shea on 13 February 2012 There are few games more different from D&D than the story-focused RPG Fiasco. 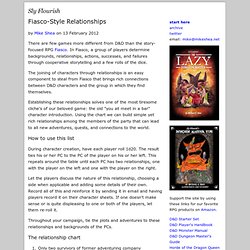 In Fiasco, a group of players determine backgrounds, relationships, actions, successes, and failures through cooperative storytelling and a few rolls of the dice. The joining of characters through relationships is an easy component to steal from Fiasco that brings rich connections between D&D characters and the group in which they find themselves. Sheet.jpg (JPEG Image, 3274 × 2550 pixels) - Scaled (31%) Rory's Story Cubes. Raises.pdf. NPC Stat Card Generator. Zadmar's Savage Worlds stuff.