POV-Ray - The Persistence of Vision Raytracer 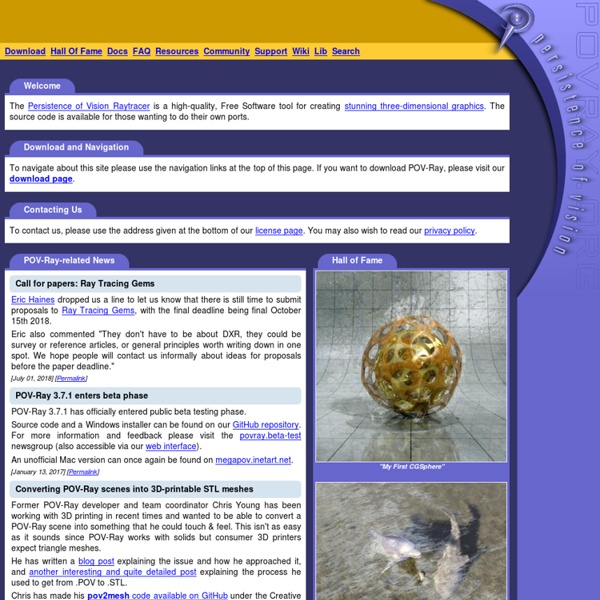 Visualization Library is a C++ middleware for high-performance 2D and 3D graphics applications based on the industry standard OpenGL 2.1, designed to develop portable applications for the Windows, Linux and Mac OS X operating systems. Lost: A giant belt of brown clouds big enough to swallow Earth twenty times over. Since 2001, OGRE has grown to become one of the most popular open-source graphics rendering engines, and has been used in a large number of production projects. Check out the first maintenance release to the new 1.7 stable branch codenamed Cthugha. e-on software, maker of the leading solutions for Digital Nature, announced today the immediate availability of Vue 8.5 xStream and Infinite, its professional solutions for the creation, animation and rendering of natural 3D environments. NASA's Solar Dynamics Observatory ...

TrueSpace - Wikipedia TrueSpace (styled as trueSpace) was a commercial 3D computer graphics and animation software developed by Caligari Corporation, bought-out by Microsoft. As of May 2009, it has been officially discontinued, but with some 'unofficial support' up to February 2010, at least. . Partial Development At Flat2D V2 {www.flat2d.com/Default_en.aspx} History[edit] The company was founded in 1985 by Roman Ormandy. A prototype 3D video animation package for the Amiga Computer led to the incorporation of Octree Software in 1986. DreamStudio Celeum DreamStudio contains all the apps you need to create stunning graphics, captivating videos, inspiring music, and professional websites. Available as a free download, DreamStudio can be run directly from DVD, installed to your hard-drive, or even installed onto a USB Flash drive, for the ultimate in portability! Here is a list of just some of the included software: Cinelerra – a powerful non-linear video editor comparable to leading solutions like Apple’s Final Cut Pro, Sony Vegas, or Adobe Premiere. Cinelerra contains more than 30 visual effects like motion tracking and chromakey, and supports both keyframing and nested sequences.

Mantra Rendering At the back-end of any CG project is where you render all your lights, geometry, and effects. With Houdini, you can rely on a robust built-in rendering solution called Mantra or full support for a wide variety of third party rendering options. Whatever route you choose, Houdini is the ideal environment for bringing together your render layers and reliably feeding the farm. Production-ready Mantra. More and more studios are discovering the performance benefits of a Mantra render pipeline. With a strong shading language behind it and the ability to choose between micropolygon, raytracing or physically-based rendering, you will quickly learn how Mantra can benefit you.

Sculptris Focus as an artist on pure creativity Enter Sculptris, a fun and engaging way to start off your digital sculpting journey! If you're new to the world of digital sculpting, Sculptris is the ideal ground on which to get started. If on the other hand you're experienced in CG, we offer you ZBrush. With our award-winning software, ZBrush, released more than a decade ago, Pixologic, makers of ZBrush and Sculptris, has become recognized for bringing ground-breaking innovations into the world of digital art. Sculptris Artist: Taron Baysal OpenFX downloads Download OpenFX is available in either binary distributions (which are compiled versions and only work on Windows (95/98/2000/XP/Vista/Windows7/Windows8), or the source code itself. The source code can be obtained as a ZIP archive or you can participate in the project by using/contributing via the SVN server, (mail us for a username.) The source code archive is only compiled every time there is a new Install but the SVN server contains all the latest code changes. Binary Distributions

Get the Most out of Wix: 15 Tips, Tricks and Apps With more than 40 million users worldwide, Wix is the most powerful web publishing platform out there. One of the things that make Wix stand out as a top solution for online presence is the simplicity of its platform: Creating a website has literally never been easier. Once the basics are done and your website is live, you may want to optimize your site’s performance with extra features and functionalities. We want you to get more out of your Wix website, so we collected 15 insider tips that can help you step up your online presence. Here they are. 1. C.a.R. - News Compass and Ruler - Construct and Rule C.a.R. simulates constructions with a pair of compasses and a ruler on a computer. By moving basic points, students can experience changes in the construction, check the construction for correctness.

OpenFX (software) - Wikipedia OpenFX is an open-source, free modeling and animation studio, distributed under the GNU General Public License, created by Dr. Stuart Ferguson. He made the decision to release the source code to the public in the middle of 1999 and released a stable version a year and a half later. The product, formerly named SoftF/X, was renamed to OpenFX. The OpenFX featureset includes a full renderer and raytracing engine, NURBS support, kinematics-based animation, morphing, and an extensive plugin API. Plugin capabilities include image post processor effects such as lens flare, fog and depth of field.

Googlers turn Raspberry Pi into Web server that teaches you to code The Raspberry Pi was created largely as a platform for teaching people how to become programmers, but getting started with the device isn't always easy. The Google Creative Lab is hoping to change that with a new open source project called "Coder," which turns the Pi into a "personal Web server and Web-based development environment." After installing the Coder image on a Pi's SD card and hooking it up to your network, you'd log into it from a browser on a Windows, Mac or Linux computer connected to the same network. It works in Chrome, Internet Explorer, Safari, Firefox, and any "relatively modern browser." It's "just what you need for crafting HTML, CSS, and JavaScript while you’re learning to code," Jason Striegel of the Google Creative Lab wrote yesterday.